A 23-year-old farmer of the Corozal District Ervin Torres was arraigned on Monday, January 25th, in Belize City for Causing Death by Careless Conduct of the then 31-year-old Caye Caulker resident Elmer Chub in September 2019. Chub perished during a house fire that gutted a two-story building on Langosta Street, where he lived.

The investigation, which lasted for more than a year, ended with Torres charged for causing the fire that left Chub dead. Torres was arrested over the weekend and appeared at the Belize City Magistrate Court, where Magistrate Khadeen Palmer read the single indictable offense of Causing Death by Careless Conduct. No plea was taken. Torres was granted an $8,000 bail plus two sureties of $4,000 each. His next court date is May 13, 2021, in Caye Caulker. 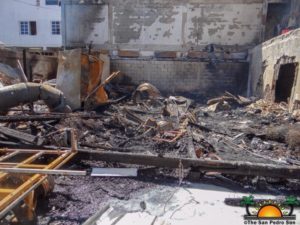 The fire reportedly started after midnight on Independence Day, September 21, 2019. The blaze destroyed a two-story building housing a golf cart rental and apartments. Chub, originally from Corozal, was reportedly socializing with friends, who invited him to see the Independence Day fireworks. According to reports, he decided instead to head home for the night. When the fire began, Chub became trapped in the blaze and died. His charred body was discovered the following day when members of the National Fire Service and Belize Electricity Limited cleaned the area.

Chub’s death touched many residents of La Isla Cariñosa, who lamented the unfortunate incident. He was described as a hard-working young man and did not deserve to die in such a manner.