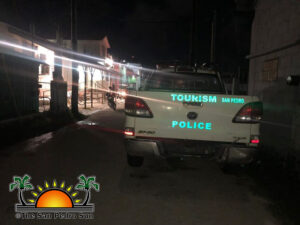 San Pedro Police continue investigating a shooting incident on Friday night, December 17th, in the Boca del Rio area. A 22-year-old man identified as Jose Henriquez was injured in the attack when two men opened fire on him, one of them known to the victim. Henriquez was shot in his left leg lower front area, treated at the Dr. Otto Rodriguez San Pedro Polyclinic II, and arrangements were made to transport him to Belize City for further medical attention.

The shooting took place around 10PM when neighbors reported hearing up to nine gunshots.  A report from police revealed that Henriquez was at home inside his room when he heard someone shout his name from outside. He opened his window and observed two male persons outside on separate bicycles. Henriquez recognized one of them, but before he could answer back or do anything else, the two men started shooting at him. Henriquez remembered hearing about seven loud bangs. He managed to close the window but still sustained gunshot wounds in the left leg.

Police quickly responded to the scene and transported Henriquez to the polyclinic, where he remained for the rest of the night. He was moved to the Karl Heusner Memorial Hospital in Belize City the following day for further medical services.

Meanwhile, police collected 18- .9mm expended shell Aguila brand from the street in front of the victim’s house at the crime scene. The search also yielded six .9mm spent shells of the same brand about 75 feet down the street. Police also recovered two bicycles- one purple 24- inch female Beach Cruiser and one black male beach cruiser 26- inch. It is believed the perpetrators used them.

Marcial Westby continues to recover after stabbing incident; how you can help