« Older: Jose Henriquez shot by an alleged acquaintance
Newer: » Patrick Faber resigns as leader of the United Democratic Party and Leader of the Opposition 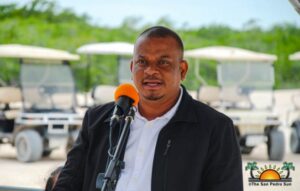 Police have issued an arrest warrant for the Leader of the Opposition (LOO) and the United Democratic Party (UDP) Honourable Patrick Faber in response to a domestic violence complaint. His fiancée, Dr. Shanikka Arnold, made a report to police on Wednesday, January 19th alleging that the LOO caused damage to her laptop and assaulted her. Faber, once arrested, is to be charged with assault and damage to private property.

The Commissioner of Police (ComPol), Chester Williams, told reporters on Thursday, January 20th, that they had not located Faber and were looking for him. He shared that the report suggests Faber used a hammer to hit her hands. Her injuries were classified as Harm. Dr. Arnold’s allegations also indicate that the LOO caused damage to her laptop.

Dr. Arnold showed up at the Queen’s Street Police Station in Belize City to report in Faber’s car. She explained that this was the nearest available vehicle for her to escape. ComPol said he had spoken with attorney Richard ‘Dickie’ Bradley, who mentioned he was making arrangements to accompany Faber to the police station by Thursday afternoon. However, this did not happen. ComPol also noted if the complainant decides to withdraw charges, the case would be dismissed.

On Thursday, the previous LOO Honourable Shyne Barrow said that such an incident would be a damaging blow to the Party, leading to another setback for rebuilding the confidence of the Belizean people. He had hoped the reports were not accurate.

Faber has publicly acknowledged his problem with anger management, for which he had been receiving counseling and therapy in the United States of America. This latest incident may also lead to Faber’s removal as leader of the UDP and a recall perhaps as Leader of the Opposition.