Information from the Supreme Court in Belize City indicates that the trial of island resident David Gonzales, accused of killing his wife Marisela Gonzales in October 2020, has begun.

The trial reportedly started on Thursday, July 21st, with a case management conference. According to the reports, the court session included announcing over 40 witness statements as evidence. After the case management session, the trial was adjourned to September 29, 2022.

Gonzales has been serving time at the Kolbe Foundation-Belize Central Prison since 2020. Marisela’s murder was the 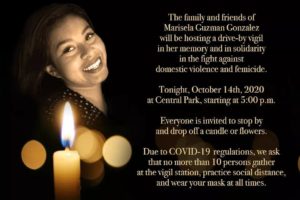 only one recorded in San Pedro for 2020. Her naked, lifeless body was found on October 12, 2020, at the dump site south of the island near Marina Drive. According to police, the body was observed with an apparent headshot wound. It has been speculated that Marisela lived in an abusive relationship.

Gonzales told police that there was an argument with his wife the night before. He claimed they were in their golf cart when she jumped off. Gonzales said he never saw her again following that incident. Investigators, however, found what appeared to be bloodstains on Gonzales’ vehicle and residence. As a result, he was detained and later charged with Murder.