First Crocodile Rescue of the Year by Isla Bonita Elementary


Press Release – American Crocodile Education Sanctuary – January 16, 2012 – Friday the 13th marked the date for the first crocodilian rescue on Ambergris Caye. At 9:40AM Cherie Chenot-Rose of ACES/American Crocodile Education Sanctuary received a call from Mrs. Abby Martinez from the Isla Bonita School. Martinez explained that she had rescued a small croc that was in the DFC area in the middle of the road and a long ways from any natural water source. She feared that the little croc would either be run over or possibly attacked by a local pet. She went on to explain that she saved it because she remembered ACES teaching the children at her school about the importance of crocodiles last year and “she didn’t wish it to get hurt.” 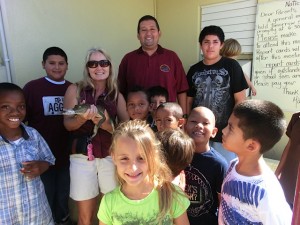 Animal Behaviorists Vince Rose and Cherie promptly went to the school where they were met by the school’s Vice-Principal, Mr. Hector Trejo, carrying a flour sack that seemed to have a life of its own. The children were very excited to see the little croc, so with the permission of Mr. Trejo, the children present got to pose with the three foot reptile they named “Bonita” or “Bonito” if the croc turns out to be a male.

“I commend all those involved in this crocs rescue. They most likely did save the croc’s life because according to Mrs. Martinez it was very far from the lagoon and was believed to possibly come from under someone’s home. Additionally, they are great role model for the children at the school in putting the animal’s welfare first,” stated Cherie. “The croc is extremely healthy and will be held in captivity for a few days to determine if it was possibly someone’s “pet” and too used to humans. If so, it will be rehabilitated and desensitized to humans. ACES will be sure that it can catch its own fish, shrimp and crabs before it is tagged with a microchip and re-released in a remote location”.

Congratulations, students of Caye Caulker’s Ocean Academy for an amazing year of awards!