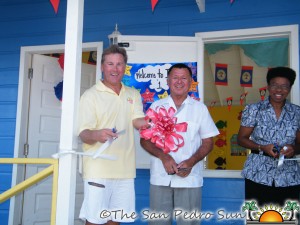 Inauguration ceremonies took place on Thursday September 6th at the San Pedro Roman Catholic School (SPRCS) for a new school building. The brand new building will hold three classrooms and is expected to minimize the congestion that the school faces. It will also allow for more children to have access to a primary school education. The building was officially inaugurated by the school’s benefactor and owner of Canary Coves Don Listwin, Area Representative Hon Manuel Heredia, Mayor of San Pedro Daniel Guerrero and the Manager of Roman Catholic Schools in Belize, Sister Barbara Flores.

The building measures 27 feet wide by 72 feet long, and is estimated to have cost over $120,000. Financing for the building was obtained through the collective efforts of the Councilor Gaby Nuñez and the school management, who lobbied for funding from Listwin. Don Listwin, who has adopted San Pedro as his second home, spoke at the event, saying he was happy to be involved and contribute to education on the island. “If you are going to live in a community, you have to participate in the community and so my wife and I both though about what we wanted to do… We were happy to do this (building of the classroom) and we are happy to see the result.” Listwin also stated that he wants to be further involved in the community. 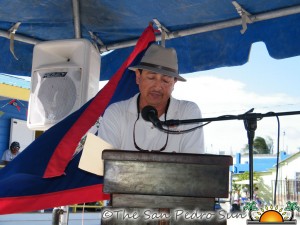 At the event Mayor Guerrero said that the conviction of a working council led them to seek funding for the much needed class room. “When my councilors and I were sworn in as the new San Pedro Town Council, we pledged to give our very best efforts to serve our community and we pledged our full support to education for we know that our children are the future of our beloved island… It is as a result of this conviction that we sought and obtained funding which has provided this much needed classroom space for our children,” said the Mayor as he pledged to continue working alongside the management of the school to improve the quality of education being offered. But while the Mayor was happy for the inauguration of the building, he was also critical of the state of other buildings before being uplifted over the holiday. “At the same time I am saddened by state of disrepair which we found at the SPRCS. I was really saddened to see the deplorable classroom facilities and grounds which our children had to use to get their education. If we were only willing to provide poor facilities for our children to learn, then we could only expect poorly prepared citizens of tomorrow,” criticized Mayor Guerrero.

For her part principal of the SPRCS Roxani Kay said that the management of the school is happy for the generous donation given by Listwin. She thanked the council for their involvement in making the new building a reality. “It has alleviated tremendously the overcrowding that we had in the classrooms… this classroom holds between 105 and 120 students,” said Kay. She also responded to Mayor Guerrero’s critical comments on the state of some of the older buildings. “It was not really in much of a dilapidated state as he might have made it sound. Yes there were areas that needed improvements. Most of the buildings are wooden, and you know over time, if you do not refurbish these buildings, then obviously they will rot. Yes there were some areas that needed repair but not to a stage where it posed any danger for the children,” defended Kay. 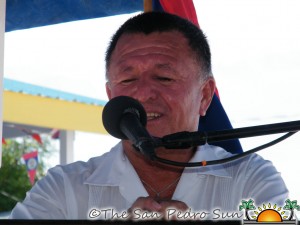 Also addressing the gathering was Area Representative Manuel Heredia Jr who spoke of his government’s commitment to education. Heredia said that almost one-quarter of the government’s annual budget is being invested in the education sector of the country and challenged the teachers and students to take advantage of the opportunity of a free education. Representing the Ministry of Education was the Principal Education Officer Jahmor Lopez. “I want, if it is possible, to bag what we have here in San Pedro and take it to the mainland. This has to be a shining example for us to show other individuals who have the means that we must light a candle. We must be a part of the solution because we need all of us to make education possible in this country,” said Lopez who officially thanked Listwin for his contribution. 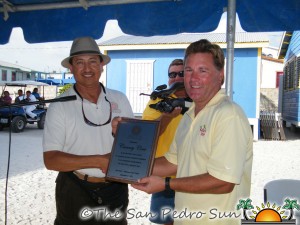 Councilor Nuñez for his part took the opportunity to thank Listwin for his significant financial contribution, as well as the work team, some of whom volunteered their time, to help in the construction and painting of the entire school.

At the ceremony, certificates were distributed to everyone who helped in one way or the other in making the building of the new classroom a reality. The SPTC also presented a plaque of appreciation and a wood carving to Listwin as a symbol of gratitude.

Also present to witness the ceremony was the General Manager of RC schools in Belize Sister Barbara Flores. SPRCS has a current enrollment of 903 students.

Tia the Tamandua Returns to the Wild7 Photos