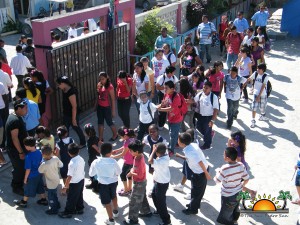 How prepared is your child’s school in handling an emergency evacuation? Are the schools on the island prepared to deal with a worst case scenario? Those are some of the questions that resounded at the School Safety Plan workshop that took place on the 6th and 7th of December with 12 school representatives from both San Pedro Town and Caye Caulker village. Following the workshop, the participants conducted a simulation exercise at the San Pedro Roman Catholic School (SPRCS) with a “worst case scenario” to see if the school’s emergency evacuation plan is efficient and whether the school grounds were evacuated in a timely manner.
The trainees made an unexpected visit to the SPRCS to conduct the simulation on Friday December 7th. The team’s cunningly plotted scenario: an earthquake that has caused a fire staring at the building that houses the cafeteria and the computer room. In addition lamp posts have fallen over two of the three gates and a tsunami warning has also been sent out. Children were 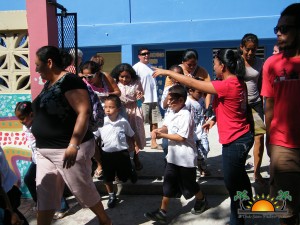 out on break, some having a visit by their guardians; others were playing while others were in their respective classrooms when the alarm went off. After a quick briefing by trainees and the teachers were told of the scenario, two short and one long alarm went off, indicating to the students that the school grounds were being evacuated. All 900 students, who have been taught from the opening of the school year, knew how to evacuate the school grounds. The students, parents and teachers all orderly and calmly,but as fast as they could, ran to the main gate on Barrier Reef Drive and evacuated off the school campus.
According the Health and Family Life Education Officer and National School Safety Coordinator, Jose Zuniga, the school should have been evacuated in a time span of three minutes. However, it took almost six minutes to evacuate most students. At least six students were trapped when they ran in a different direction and the 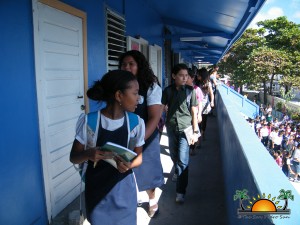 teachers were unaware that they were missing. Zuniga explained that half of the total school population became highly at risk because of the time taken to evacuate the schools grounds. One of the factors Zuniga believes that caused the lapse in time to evacuate was the fact that the school has three gates and two were closed because of the scenario. Zuniga said that the scenario was relevant and realistic and as such the School Safety Committee for SPRC should look at all possible scenarios that can happen at the school and improve on the school safety plan.
The two-day workshop and the worst case scenario drill at the SPRC School concluded the safety campaign at the various schools from both sister islands that started in September. The Ministry of Education is advising all island schools to keep on conducting evacuation drills to improve on the school’s emergency plans and to practice all possible scenarios so that the students and teachers become more prepared, if and when the plans need be put to a real test. Already there are plans to conduct more training with other school representatives in February of 2013 in similar areas so that the schools are able to strengthen their safety plan and have trained staff that can conduct their own drills.