The University of Mississippi (Ole Miss) M-Powered Magazine received a RFK Journalism Award for their spring 2012 issue detailing the students’ service experience in Belize. The university’s entry was amongst 11 winners:eight professional and three student categories submitted from all over the United States of America. The award winners were announced on July 15th by The Robert F. Kennedy Center for Justice and Human Rights as part of its annual RFK Book and Journalism Awards. 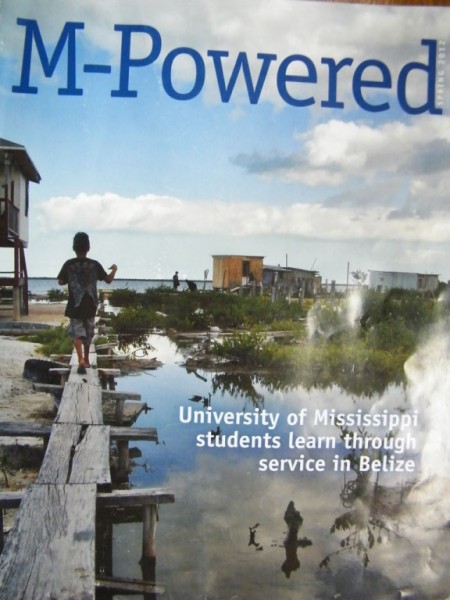 M-Powered’s Spring 2012 issue featured the Ole Miss students learning through service in Belize. It details the university’s work as well as the students’ contribution to the improvement made in the San Mateo Area of San Pedro Town. The articles in the magazine document the San Mateo Empowerment Project, a brain child of former Ole Miss professor Kim Shackelford. While there are several stories, the main article is entitled “The Road to Belize” and Cain Madden, the writer of the main story, explains that by empowering a community to rise out of poverty through a Study Abroad Project, it transforms students’ lives. It also detailed the reality and level of poverty in Belize’s main tourism destination, Ambergris Caye.

The RFK Journalism Awards recognize outstanding reporting on issues that reflect Robert Kennedy’s (Assassinated US Senator for New York and brother of President John F Kennedy) dedication to human rights and social justice, and his belief in the power of individual action. Winning entries provide insights into the causes, conditions, and remedies of human rights violations and injustice, and critical analysis of the movements that foster positive global change.

The award will be officially presented on September 26th at the 33rd annual RFK Book Award by Mr Robert F. Kennedy in a ceremony at the Newseum in Washington, D.C. The ceremony features the presentation of the 2013 Robert F. Kennedy Journalism Awards, which include student and professional categories. All honorees will receive a cash gift and a bust of Robert F. Kennedy by Robert Berks in recognition of their award.

Patricia Thompson, Director of Student Media at Ole Miss will receive the awards on behalf of the university.The San Pedro Sun is proud to work very closely with the Ole Miss students while in Belize and we join the community in congratulating them on this well deserved award.