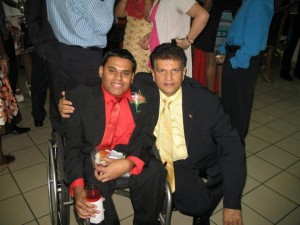 It is with great pride, joy and tons of admiration that the University of the West Indies (UWI), Open Campus, Belize joins our sister campus, the UWI at St. Augustine, Trinidad and Tobago in congratulating Dr. Einstein Bodden as he relishes in taking his oath as a Medical Doctor.
All Belizeans at home and abroad should share in this great accomplishment for a person with diverse abilities who has not let the wheelchair, to which he has been confined for the better part of his life (from the tender age of two years old), restrict him from pursuing his dream of becoming a medical doctor.
Dr. Einstein Bodden hails from Corozal Town and he commenced his medical studies with the UWI at St. Augustine, Trinidad and Tobago. He was home-schooled by his mother (now deceased), a home maker, until he was eight years old because she was determined that he would have an education. At his insistence to experience the formal school setting, his parents agreed for him to attend St. Paul’s Primary School in Corozal where his father, an auto mechanic, took him by car back and forth daily so that he could attend school. It was his siblings with whom he shares a special bond and in particular his younger brother, Elson, who were truly Einstein’s “keepers” and they ensured that he did not miss out on any physical activities at school.

From an early age, it was clear that Einstein was living up to his name, he excelled at his studies. He attended Corozal Community College and Junior College where he majored in the Sciences as an honor student. It was at this time that he decided that he wanted to be a medical doctor. He was the guest speaker at the Tenth CXC Award Ceremony and it was there that he met Mrs. Luz Longsworth from the UWI School of Continuing Studies (now the UWI, Open Campus). It was she who encouraged him to pursue medical studies with the UWI. The Government of Belize awarded him a Professional and Technical Scholarship which afforded him the opportunity to attend the UWI at St. Augustine, Trinidad and Tobago to pursue his medical studies. The rest is now history.
One of Einstein’s deepest regrets is that his mother, his first educator, inspiration and supporter, passed away before she could share this moment of glory with him in the achievement of his goal to become a medical doctor.
The staff of the UWI, Open Campus, Belize along with his family, friends, classmates, faculty, and administration at the UWI St. Augustine Campus and as well the Former Prime Minister of Trinidad and Tobago, the Honourable Patrick Manning and Belize Head of Mission to Trinidad and Tobago, Mr. Thomas Chanona supported Einstein throughout the ensuing years that brought him to this point in time when he can now be called Dr. Einstein Bodden. 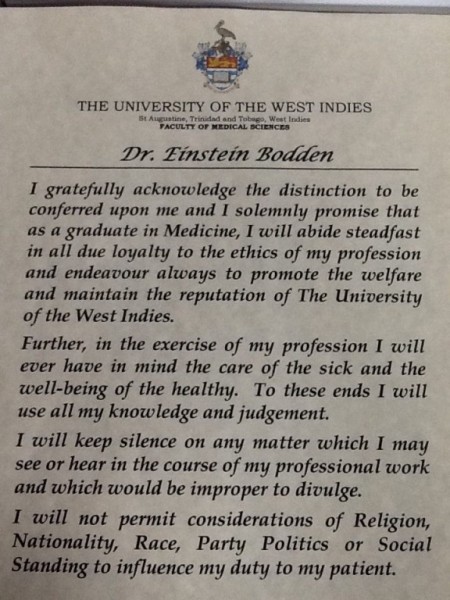 One minute in the presence of this dynamic and obviously highly intelligent young man speaks volumes of his drive, optimism and perseverance in pursuing his dream. Dr. Einstein Bodden is now seeking internship in his country of Belize or abroad which he knows will pose additional challenges but he is up for it. Aside from his professional life, Dr. Einstein Bodden enjoys reading, playing the guitar and keyboard and most importantly quality time with his family and friends.
Dr. Einstein Bodden arrived in Belize on the afternoon of December 25, 2013.