A total of 102 students received their high school diplomas at the 2018 San Pedro High School (SPHS) graduation ceremonies held at the Angel Nuñez Auditorium on Saturday, June 9th at 5PM. 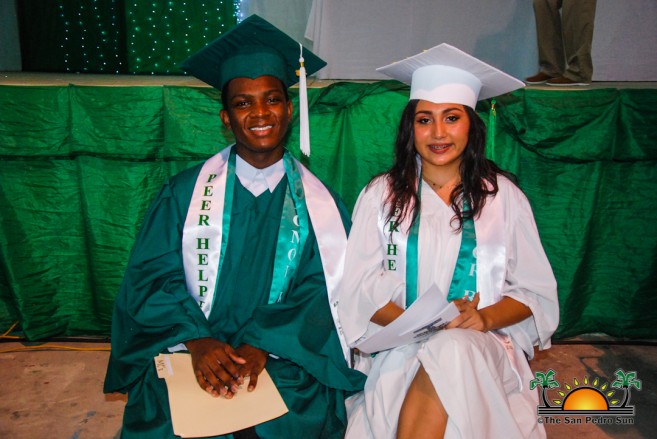 Mistress and Master of ceremonies – and fellow graduates – Briseidi Molina and Jaye Wagner presided over the event, in which students were honored in front of family and friends. 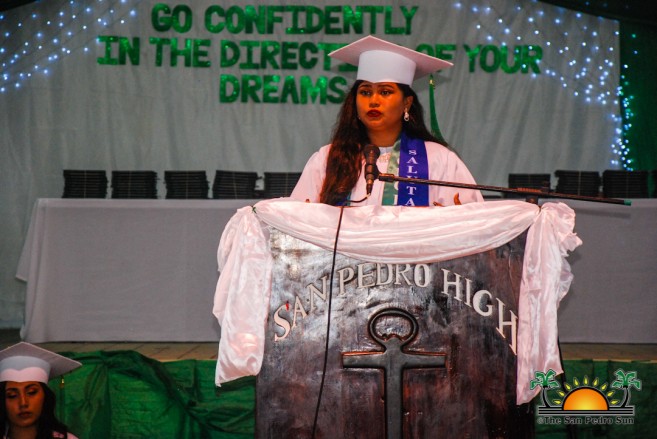 After beautiful renditions of the Belize National Anthem and School Song, the Salutatorian Address was delivered by graduate Elisa Garcia. She welcomed everyone to the ceremony, commending all parents and teachers for their dedication and support. Garcia thanked everyone who helped her in the journey through her secondary studies, while encouraging her colleagues to continue working hard in their future endeavors.

After the salutatorian remarks, SPHS Vice Chairman, Miguel Alamilla handed out diplomas. This was followed by the distribution of individual awards, starting with the academic recognitions. 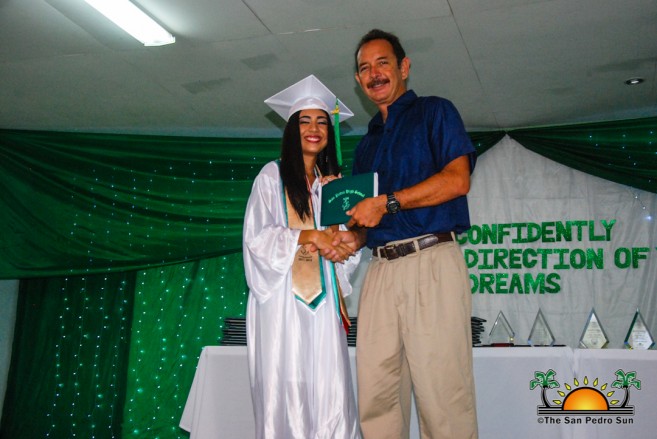 Kylie Alamilla received highest marks in the class of 4A, with a GPA of 3.96. 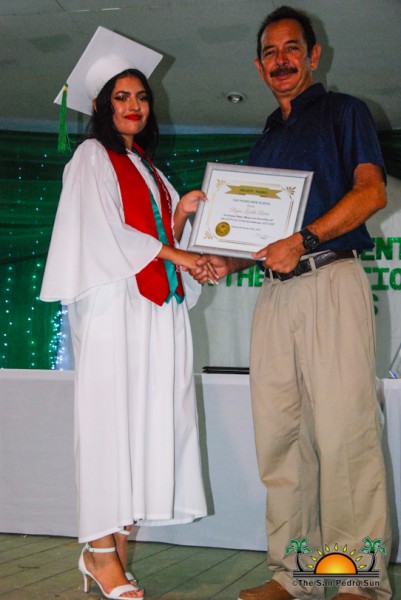 In the class of 4C, Reina Rivera obtained the highest GPA of 3.84. 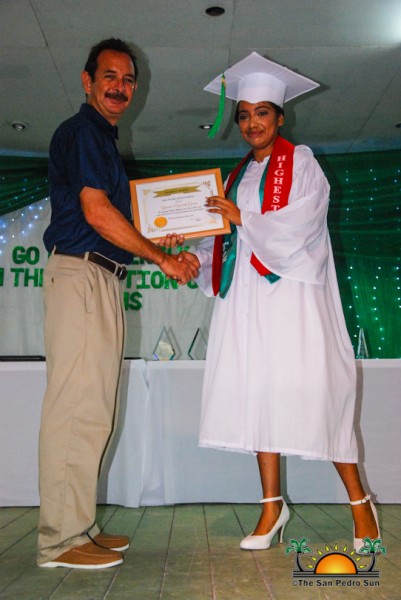 Highest marks in 4E class went to Yesenia Garcia with a GPA of 3.73. 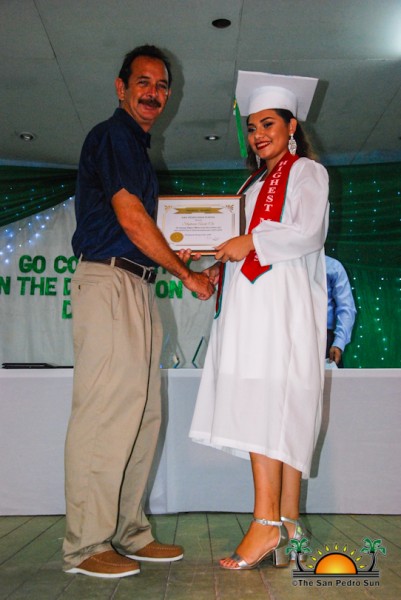 In the class of 4G, Stephanie Chi was awarded for obtaining a GPA of 3.76.

Thereafter, the top three highest GPAs in the entire graduation class were then announced. 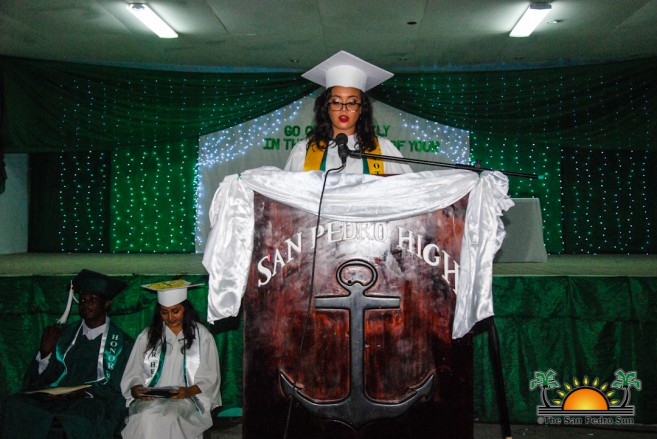 In third place was Nicole Ritchie, delivering the vote of thanks, with a GPA of 3.81. 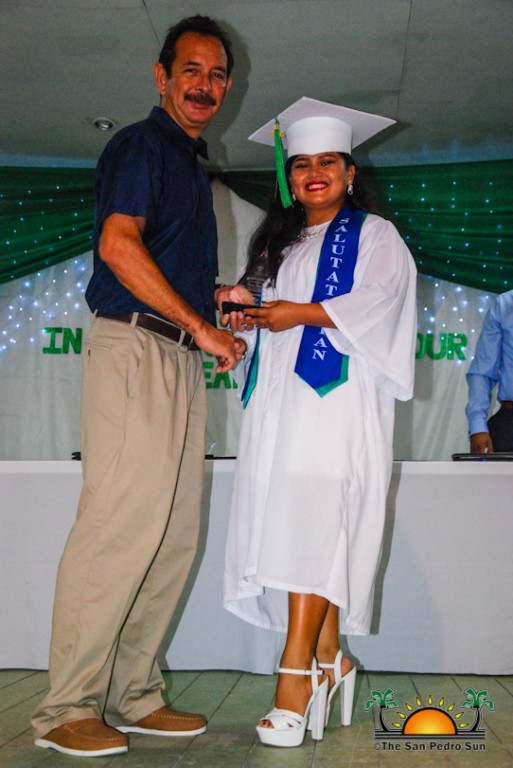 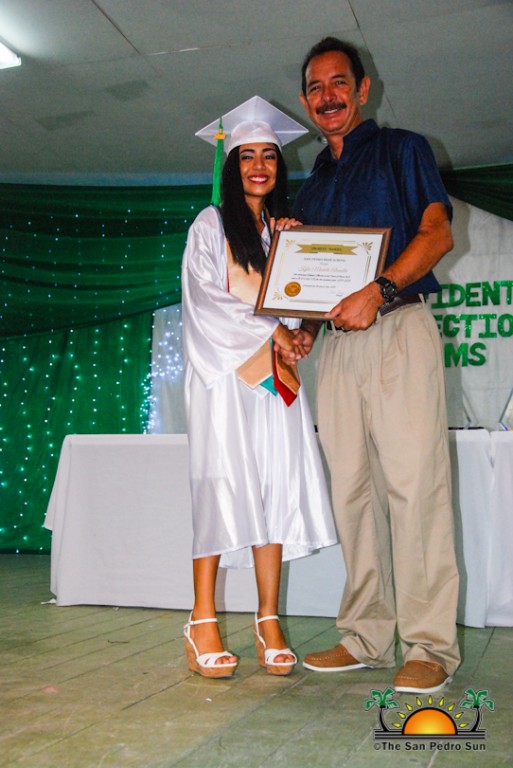 Other awards highlighting students’ well-rounded approach to their studies and surroundings were also handed out.

Guest speaker was SPHS’ mathematics teachers Iris Perez, and she encouraged the graduates to pursue their goals and to never look back. She congratulated each one of them for their hard work in their journey through their secondary studies. 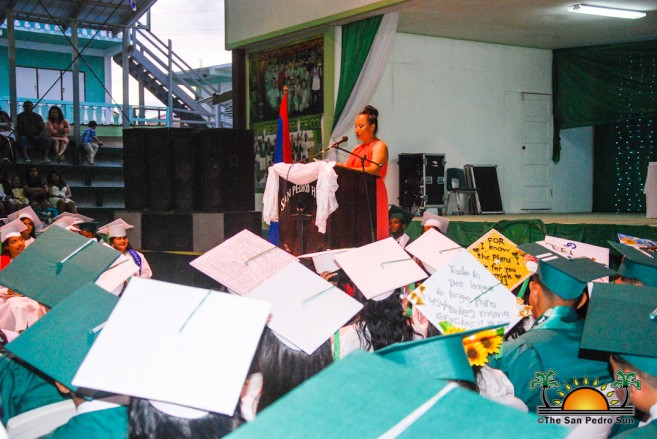 At the same time, she commended all parents and teachers for being the main pillars for all the 102 students that graduated. “Be persistent and achieve your goals,” Perez told the graduates. She reminded them that no matter where they go in life, to always do and be their best. 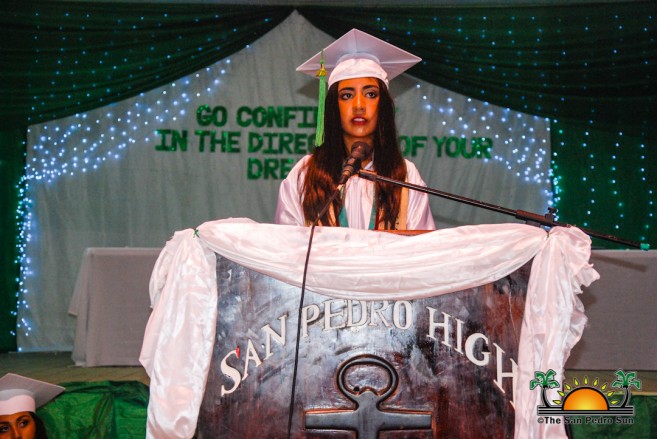 Perez’ remarks were followed by Valedictorian Kylie Alamilla, who shared some of her experiences while at SPHS. She congratulated her colleagues and thanked everyone who supported her during the good and bad times throughout high school. Alamilla invited her student colleagues to continue being passionate about their goals and always follow the path of success.

Immediately after, the traditional rose ceremony took place, led by Arianie Novelo and Shanelle Palma. The emotional ceremony had graduates hand a rose to their parents. SPHS Principal Emil Vasquez then delivered a few remarks highlighting the achievements academics and the sports achievements of the students at SPHS. He also pointed out some of the school’s acquisitions like a kitchen, conference room and high- speed internet. He challenged incoming students to work hard for their goals and to never give up. The ceremony then ended with a candle lighting ceremony followed by the Vote of Thanks, given by Nicole Ritchie. 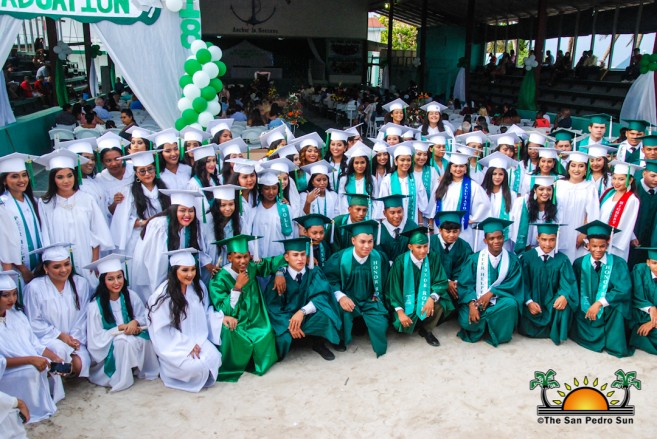 The San Pedro Sun joins the entire community in congratulating the 2018 graduating class of San Pedro High School and wishes them all the best in their future endeavors.