Reef Radio and Coral Cable’s San Pedro’s Got Talent came to an end last night with a stunning show of talent across the board. Children performed songs, dances, poetry and piano playing among other talents. 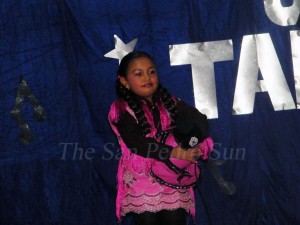 The competition, which started on October 23rd, was the first of its kind here on the island and saw the participation of 53 competitors, made up of a mix of individual performers and groups. There were five weeks of audition after which, 31 acts went to the semi finals. After two weeks of semi finals 15 acts were scheduled for the final competition, of which 14 performed.

Performing to a packed Lion’s den, all competitors sang, danced and performed their hearts out. But in the end, there were only to be three winners. In third place was Elina Palma, who took home a $100 cash prize sponsored by Melanie Paz and $250 sponsored by Castillo’s Hardware. In second place was the very talented Noeli Wiltshire, who took home the second prize of $500 sponsored by Mar de Colores and the UDP Team as well as a prize courtesy of Tres Hermanos.

And the winner for the 2011-2012 San Pedro’s got talent is Diego Francois with his electrifying performance on the piano. For first place, Ruben took home $1000 courtesy of Grand Belizean Estates, a $200 cash prize courtesy of Mr. Gilbert Acosta, a gift certificate from Caribeña Enterprises and a gift certificate from Ramon’s Village.
At the end of the night, organizer Eiden Salazar announced that the other finalists would be receiving small prizes for their participation and noted that everyone that competed were indeed winners.

In speaking of his win, Diego stated, “I want thank my dad for encouraging me to participate in this contest.” Special thanks to the SPTC, Reef Radio, Coral Cable Vision and everyone that contributed to make the first ever San Pedro’s Got Talent a huge success.