Aurelio Martinez and the Garifuna Collective perform at Sundiver Resort

Aurelio Martinez, Honduran Garifuna musician extraordinaire performed to the delight of many on the beach at Sundiver Beach Resort. Accompanied by the Garifuna Collective, Martinez sang in his distinctive voice, beautiful ballads and infectiously rhythmic Punta/Paranda jams that had the crowd moving. Electric and acoustic guitars, Garifuna drumbeats, the shake-shake of maracas and the voices clear into the night – it was a fantastic evening of music and culture. 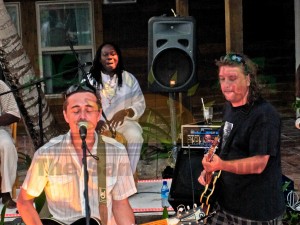 Opening the evening’s event was Canadian singer/songwriter Danny Michel, who has been traveling to Belize for the past six years. Michel had the crowd singing along; especially to his Caye Caulker based song “Wish Willy”. Adding to the vibe was Aurelio on the drums, and Stonetree Records’ Ivan Duran on guitar. 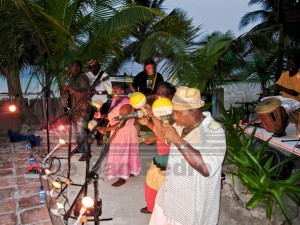 After a short intermission, the Garifuna Collective launched into their beautiful, soul-stirring rendition of songs that catapulted them into the world stage. Two extremely talented ladies led in vocals, while guitar and drums resonated, fusing to one harmonious melody that had everyone on their feet. After an emotional, beautiful rendition of “Watina”, it was time to groove on with faster paced, equally wonderful songs. In no time whatsoever, it was time for intermission and the long-awaited performance by Aurelio Martinez.

Originally from Honduras, Martinez spoke of his friend, the late, great Andy Palacio, who gave him the ‘key’ to Belize. Music transcends borders, and through the Garifuna culture, both artists were able to reach out to one another, welcoming them into their homes, their country, and their friendships and connections. Aurelio has been able to collaborate with the Garifuna Collective, performing to audiences far and wide, and for the better part of an hour, he did just that. The poignant Laru Beya, a quick punta dance, delightful acoustic picking, foot-stamping, hip-shaking soul stirring music soared high in the tropical night on the beach at Sundiver.

Sundiver hopes to bring such wonderful cultural experiences to the resort grounds on a monthly basis. The free concert series is the second of its kind, and the lineup was certainly filled with talent that crossed genres, borders and cultures.