Javier Castillo is the King of Kings Karaoke Champion!

After seven weeks of eliminations, 2012’s King of Kings Karaoke competition came to and end on Thursday night, June 29th with eight stellar performances by the four finalists. This year’s competition was different from previous years, as the viewers were the judges. By casting your text vote via Smart Phone to 7333, the viewers decided who the winners were.

Weekly, the participant with the lowest votes was eliminated. Ten past champions signed up to work for a chance to be crowned Reef Radio’s King of Kings Karaoke Champion and take home $2,000.00. At the end of the six weeks leading up to the finals, four participants remained: Javier Castillo, Joel Andino, Carlos Montejo and Claudia Handal.

Thursday night’s show started off with a performance by fallen competitor, Velma Melendez.  Singers then came on stage one by one to wow the crowd with the best they had to offer in the hope of garnering the grand prize.

Singing tunes from artists such as; Olivia Newton John, Daniela Romo, Leodan, Mario Quintero and Jose Luis Paralez, the eager crowd was kept well entertained. Claudia Handal was first to take center stage with her song “De Mi Enamorate”, which received a standing ovation.  This was followed by seven other equally energetic performances each garnering its amount of screams and shouts of support. 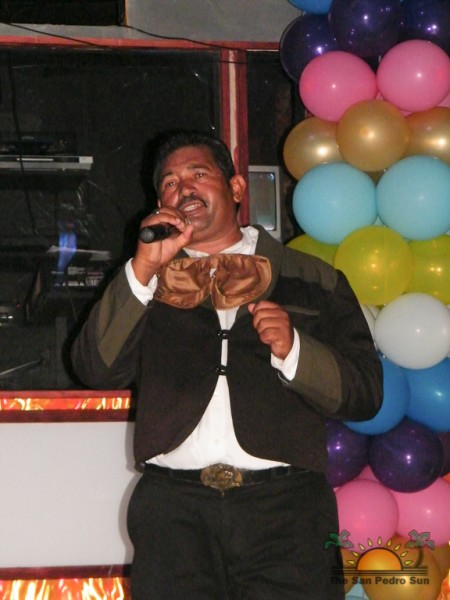 Between performances there were songs by Councilor Wally Nuñez, Councilor Carlos Barrientos, Natalie Arceo, Julianie Ferguson, and visiting from the United States, Christina offered a song by Shakira while a group visiting from Minnesota did their rendition of Cindy Lauper’s ‘Girls Just Wanna Have Fun!’

At 1am, the polls were closed for voting and the winners were announced as follows: in fourth place and receiving $250.00 was Joel Andino; third place receiving $500.00 was Carlos Montejo; in second place receiving $,1000.00, Claudia Handal and the King of King’s Karaoke Champion taking home $2,000.00 is none other than Mr. Javier Castillo.