The night of Saturday, May 31st was one of beauty, poise and elegance as four lovely young ladies competed to be the new beauty ambassador for San Pedro High School (SPHS) at the 2014-2015 Miss SPHS Pageant. The pageant started shortly after 8PM at the Angel Nuñez Auditorium with the singing of the National Anthem followed by the introduction of the three judges tasked to determine who would walk away with the crown. Judges were Councilor in charge of Community Beautification Carlos Barrientos, San Pedro AIDS Commission President Felix Ayuso and the face of Kubuli Beer in Belize, Jasmine Baiza.

After the formalities, Master of Ceremonies Angel Nuñez invited the contestants, Ezra Jailene Jacobs, Erica Bodden, Sheila Chi and Marisha Jamel Thompson on to the stage. The crowd cheered for their favorite girls as they performed an opening dance and introduced themselves. It was a dynamic dance presentation to Daddy Yankee’s hit song “Limbo”. When the girls headed backstage to change, the San Pedro Dance Academy and the SPHS Band took over the entertainment.

Next up was beach wear! Wearing gorgeous swimsuits, colorful wraps and a beach ball, the girls sure brought the beach atmosphere to the stage! As judges deliberated on the second segment, the girls changed and once again, a series of dance performances and songs kept the crowd entertained. SPHS Band’s rendition of “Let Her Go” by Passenger was a definite hit. 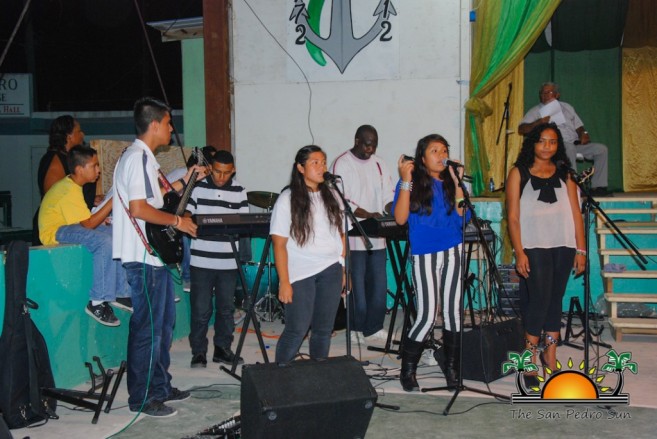 The third segment of the show was career wear and each contestant was tasked to dress according to their dream profession. Ezra came out as a flight attendant as her dream is to travel the world. Wanting to discover the hidden gems in Belize, Erica opted to be an archeologist. Sheila chose to be a pediatrician, with hopes of nurturing the future generation. Marisha dreamed beyond our atmosphere, as she posed as an astronaut. It was a most intriguing round, and it was clear that the judges had a hard task ahead. 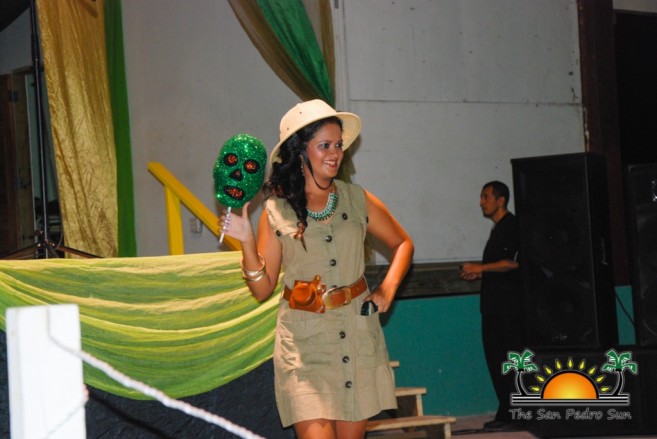 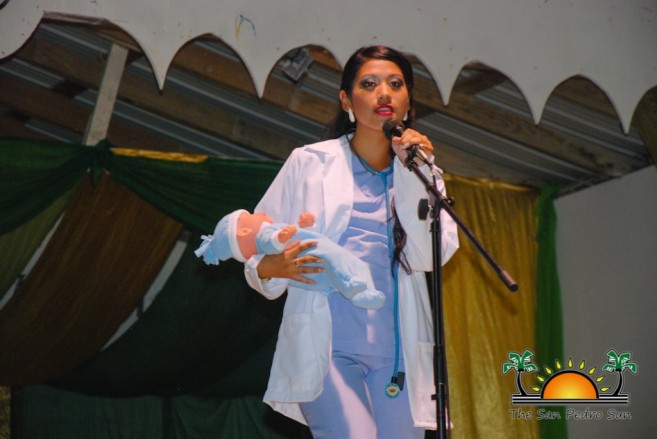 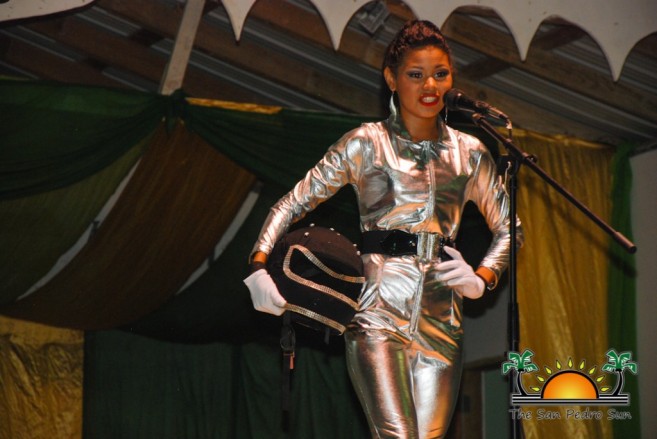 Outgoing Miss SPHS Chelsea Muñoz delighted the crowd with a unique dance performance while the contestants prepared for fantasy wear. In the fantasy wear segment the girls wore elaborate costumes representing four of the national symbols of Belize. Ezra was the magnificent Keel-billed Toucan; Erica was regal as the Black Orchid; Sheila was the majestic Mahogany and Marisha was the patriotic Belizean Flag. 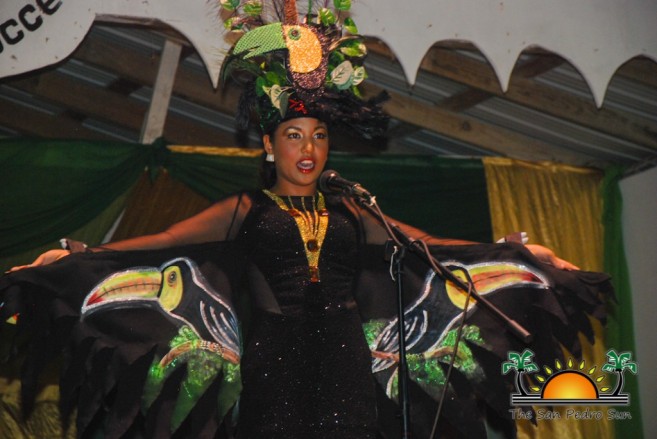 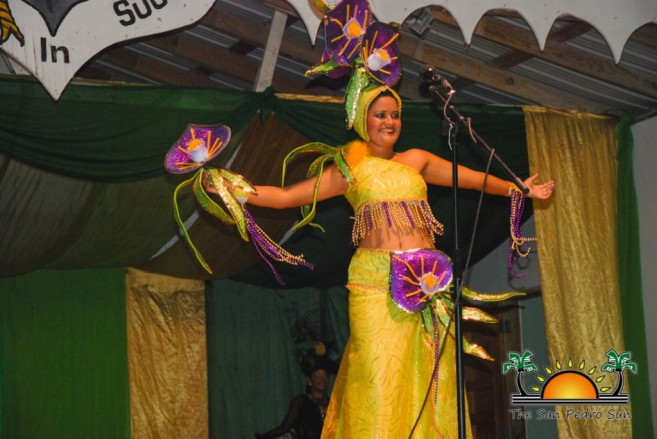 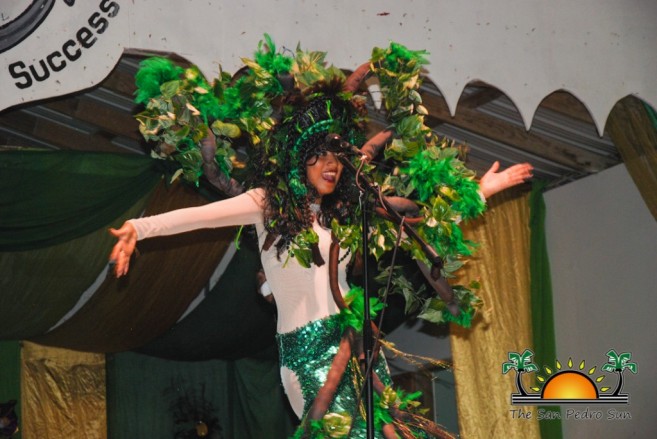 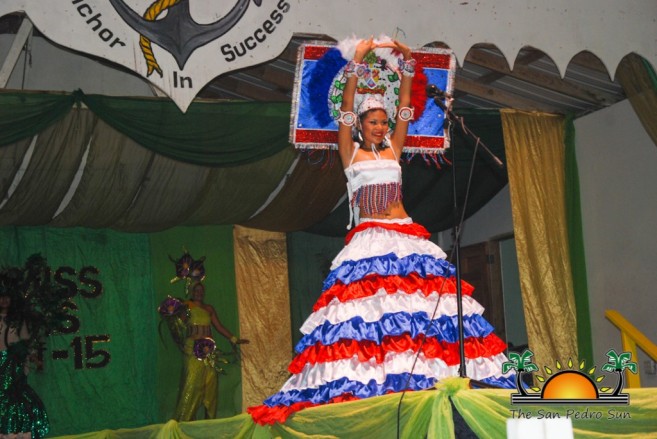 After one last dance performance, the girls came back onstage dressed in beautiful evening wear, ready for the question and answer segment. All four contestants had the arduous task of answering randomly selected questions based on community and social issues. Each girl answered her question with poise and intellect, after which the final scores were handed over to be tabulated. As that happened, Chelsea took her final walk as Miss SPHS giving an emotional farewell speech. 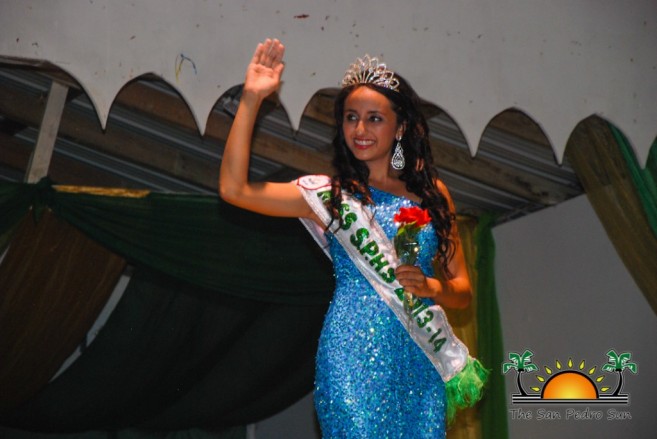 Tension was high as the time came to announce the winner. But before announcing the winner of Miss SPHS 2014-2015, MC Nuñez announced the winner for the side categories. Winning Miss Popularity and Miss Photogenic was Sheila Chi. Miss Amity went to Marisha Thompson, and she was also named first runner up. The crowd erupted in cheers as Miss SPHS 2014-2015 was announced: Sheila Chi! 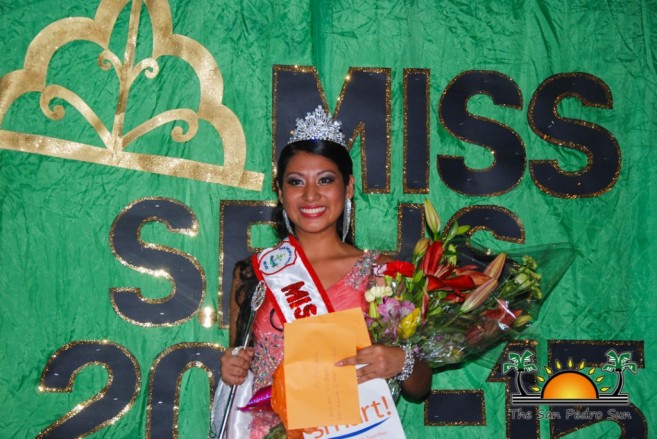 Congratulations to Sheila and the three other contestants on a great job.