Comedy Nights for a Cause raises much needed charity funds


Laughter resonated across the grounds of Sandbar Beachfront Hostel and restaurant, as for two nights, “Comedy Nights for a Cause” brought the jokes. Held on Friday, April 8th and Saturday, April 9th, the event offered amusing entertainment to the island. With world-renowned comedic storyteller, Australian Jon Bennett headlining the show, the event was huge success, raising close to $5,000 for charity.
Organized by owner of SandBar and community activist, Brittney O’Daniel, “Comedy Nights for a Cause” benefited San Pedro Food Bank, Saga Humane Society and Ambergris Caye Elementary School’s special needs program. During both nights, patrons donated towards the charities via admission fees. General admission was at a minimum $10 donation, bar seating was at a minimum $15 donation, while VIP seating was at a minimum $25 donation.

Bennett was not the only one that brought laughter to SandBar, as both shows were opened by Olde English Comedian and owner of The Truck Stop, Ben Popik. With the assistance of Joe Chung, Popik’s humorous performance set the stage for a very entertaining show each night. 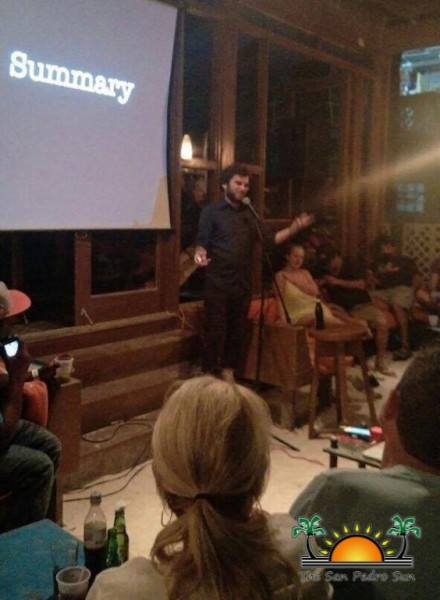 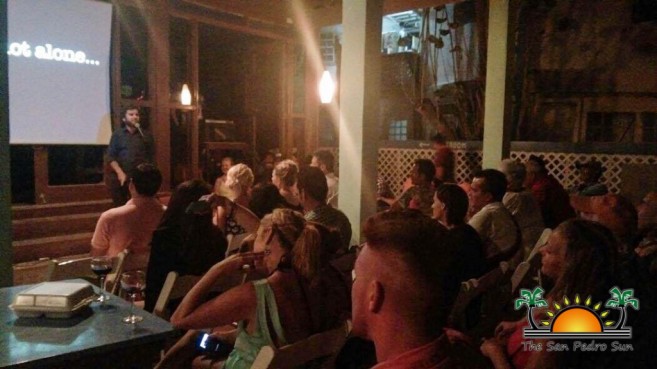 Bennet was pleased to be part of the comedy show in San Pedro. “Well, what a trip this has been! Thanks to ComedyAbroad for organising an amazing tour of Central America. All of the staff at Sandbar were so accommodating and people I’ve met in San Pedro are the most generous and lovely humans!” he said. Bennett thanked Brittney O’Daniel and Dawn Locascio for organizing a great time. “Thanks Ben Popik, Joe Chung, and Matt Hoy for all your help and for totally outdoing me in the funny department. Thanks to Jasmine and Andrew for letting me stay in their awesome place! I leave Belize with a heavy heart and a perforated ear drum from diving. My lack of hearing will remind me of what a great bunch you guys are! Thank you all so much! I hope to be back very soon!” commented Bennett on his experience in Belize.
Organizers would also like to thank everyone who came out and supported the show. 100% of the proceeds were divided between the three charities.