Prior to the prom, the grand red carpet arrival event attracted hundreds of onlookers. From around 8PM, couples made their debut down the carpet, dressed in elegant gowns and well-tailored suits and tuxedos. Some couples went all out, making grand entrances with Gang Suppression Unit (GSU) escorts, dancers, and even a fire juggler made an appearance.

While mingling with friends, the graduates enjoyed delicious food, and drinks. Tunes were provided by DJ Jago and the graduates were not shy to hit the dancefloor. From the latest in dancehall music to even the “Cha Cha Slide”—the graduates made sure their prom was a memorable one. 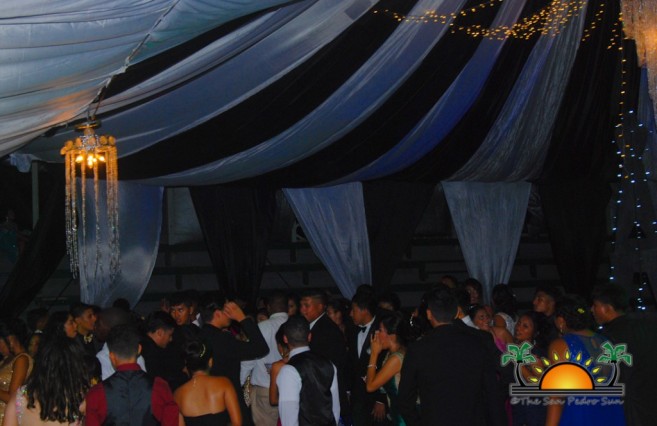 As usual, the best was saved for last, and the highly anticipated honors of SPHS Prom King and Queen 2017 went to: Manuel Flores and Rosalina Fuentez. As confetti fell from the ceiling, the King and Queen took center stage for their celebratory dance. SPHS teachers toasted to the Class of 2017, congratulating them for achieving another milestone in their academic career.

The graduates will be marching down the aisle to the tune of Pomp and Circumstance on Saturday, June 10th at the Auditorium. The San Pedro Sun congratulates SPHS’ Class of 2017!