In commemoration of the 36th anniversary of Belize’s Independence, a series of activities were held on Wednesday evening, September 20th at the Honourable Louis Sylvestre Sporting Complex. Under the theme ‘Belize: Confronting Challenges! Celebrating Triumphs! Renewing our Resolve!’ activities included an official Independence Eve ceremony, followed by the midnight flag raising ceremony and a spectacular fireworks display. 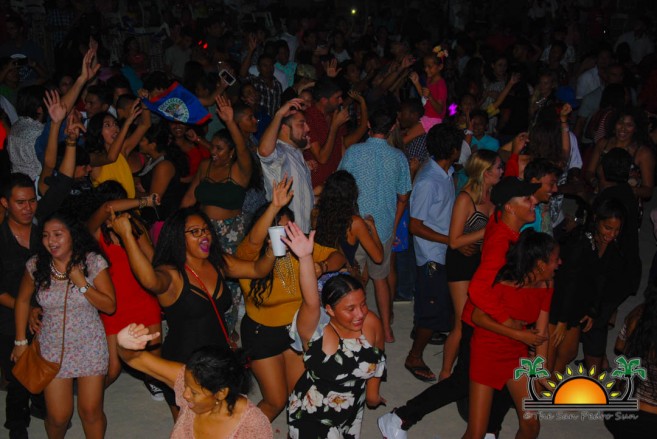 It all concluded with a fun after-party featuring Walshy Fire of Major Lazer and the Caribbean Kings, right through the early hours of September 21st. The night’s official ceremonies began shortly after 10PM as hundreds of attendees gathered for the patriotic activities. Master of Ceremonies Eiden Salazar Jr., invited Mayor Daniel Guerrero to give his speech, which highlighted the importance of the occasion. 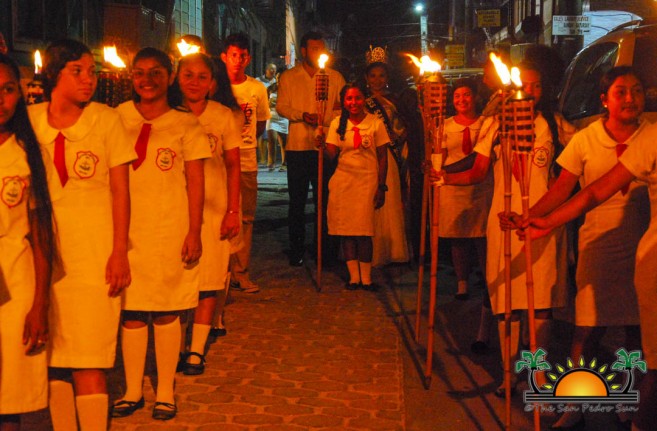 Guerrero started his address saying that he hopes this would not be his last Independence Day address, giving the fact that municipal elections are scheduled for March 2018. “I hope that with God’s will, this may not be my last Independence speech, as I am looking forward to continue serving this town as your Mayor,” he said. Guerrero also touched on what Belizeans need to do in order to contribute to the growth and success of the country. “Nation building is not about the wishful thinking or sitting down and hoping for the best. It’s about dedication, hard work, commitment, participation, conviction, and unselfish love for the country,” said Guerrero. “As children of this country, we have the obligation to engage in the development of this country.” He also added that Belize is one nation, one people and everyone must remain united to build a strong society in which hope and opportunity abounds for everyone. 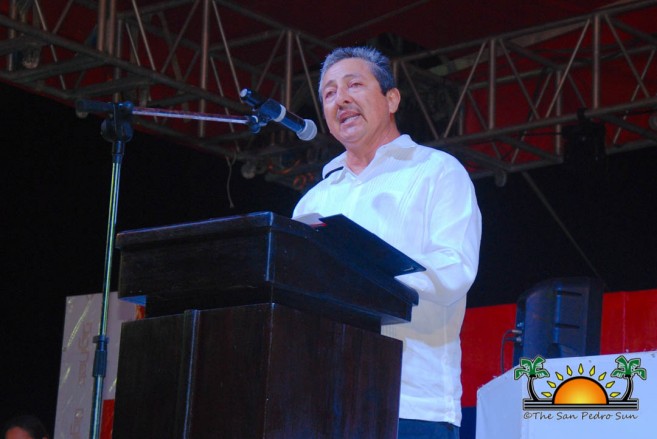 Mayor Guerrero highlighted accomplishments like the completion of a road connecting San Pedrito to San Pablo, which he says has helped to divert heavy vehicles from the downtown area. “The San Pedro Town Council will also be pedestrianizing portions of the downtown area and restricting traffic on the beach. This will ensure that we can reclaim eroded beaches and make them more friendly for all to enjoy,” he said. Guerrero also indicated that under the present government administration, they managed to deliver one of their main goals…the construction and completion of the Ambergris Stadium. Mayor Guerrero considers this to be a significant contribution to the area of sports and youth on the island. 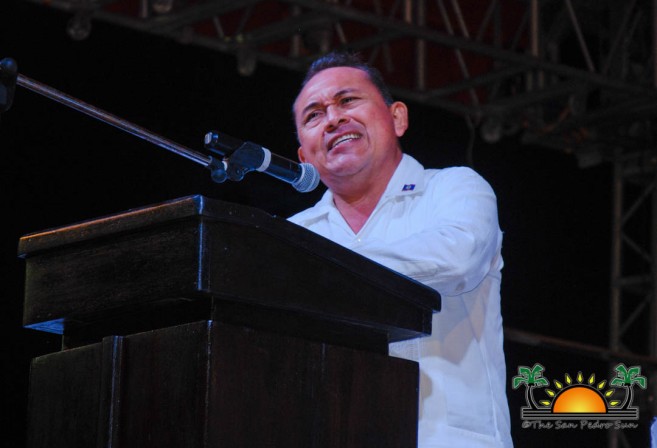 Following the Mayor’s remarks, the representative of the Opposition People’s United Party (PUP), Andre Perez delivered a few words to the attendees regarding the challenges of the nation. “Here in our municipality we are not immune, and we to have serious challenges to confront. Crime is something that we cannot ignore and it continues to haunt our community. Another challenger is the inadequate medical facility on the island. When it comes to school space, it is getting worse, as children are out of school because of the lack of space. These are real challenges on the island that continue to happen year after year,” said Perez. He stated that to build a better nation, the best way to start is with a leadership that will take a proactive approach. According to him, it should be a leadership that will be ready to accept the challenges and commit to take action through a strong partnership and alliance with the community. 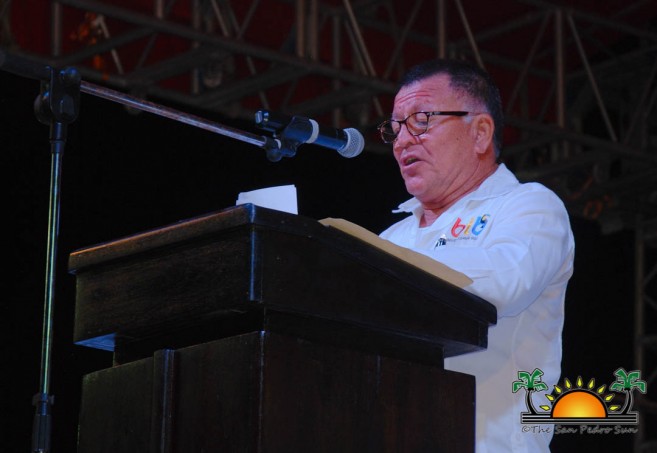 Next to speak was the Area Representative and Minister of Tourism and Civil Aviation Honourable Manuel Heredia Jr., who responded to Perez’ remarks. “Belize is a blessed country, because we are united and we are good people. Yes, I know that we have challenges in our health and education sector. But we have come a long way when it comes to medical services on the island. We now have a full 24-hour service. I guarantee you all, that by the end of my term, a hospital will be built on the island. We are also working on having three schools as well to address the lack of space in the current schools,” said. He ended by wishing everyone a happy Independence Day, and to continue working together for a better Belize.

Activities for the evening continued, leading to the midnight Flag Raising Ceremony. Members of the National Coast Guard led the ceremony, while Mayor Guerrero and Heredia did the inspection of the Guard of Honour. As the clock approached midnight, the Belize National Anthem resonated as everyone joined in the singing. 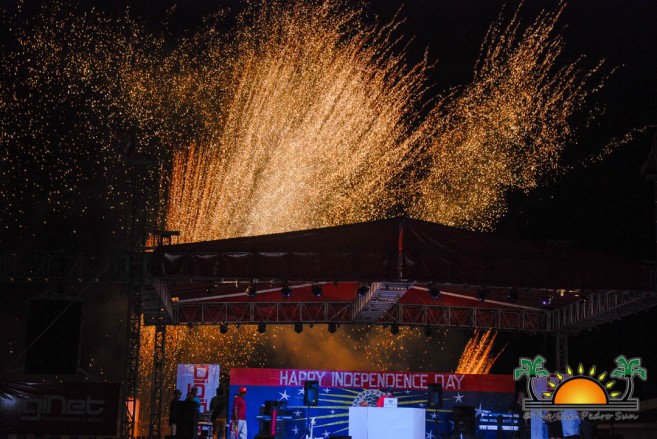 This was followed by the tradition ‘Grito’ (shout) of Independence, while the Coast Guard gave a 21 gun salute. A spectacular fireworks display followed, and then everyone was invited to dance the night away until the wee hours of the morning, when the much anticipated J’ouvert took place. 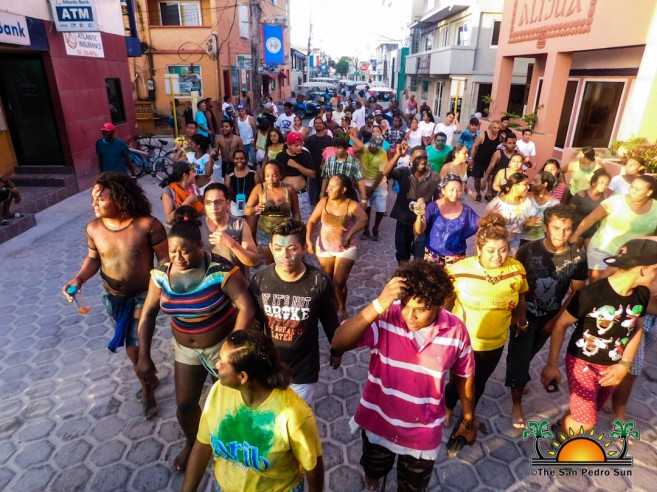 J’ouvert is a street party that starts before dawn and ends a few hours after sunrise. It originated in Trinidad, when slaves were banned from the masquerade balls of the French. Slaves would stage their own mini-carnivals in their backyards — using their own rituals and folklore, but also imitating and sometimes mocking their masters’ behaviour at the masquerade balls. After emancipation from slavery in 1838, the celebration took to the streets, but its dark origins keep the J’ouvert tradition to dawn to daybreak, while the bigger, more festive celebration is held during the peak of daytime.

San Pedro J’ouvert commenced at 5am from the Central Park, a music truck leading the way for a large crowd of revellers. Armed with coloured powder and water paint, merry islanders headed from the park up to Pescador Drive to the San Juan Roundabout. They took a turn up Sandpiper Street, then left on Seagull Street and Spider Lily Street. Once back on Laguna Drive, the J’ouvert crowd made their way past the roundabout and back into town through Pescador Drive and Tarpon Street, then back to Barrier Reef Drive and the Central Park. Covered in a multitude of colors, the participants were beyond excited to witness the sunrise on Belize’s 36th Independence Day. 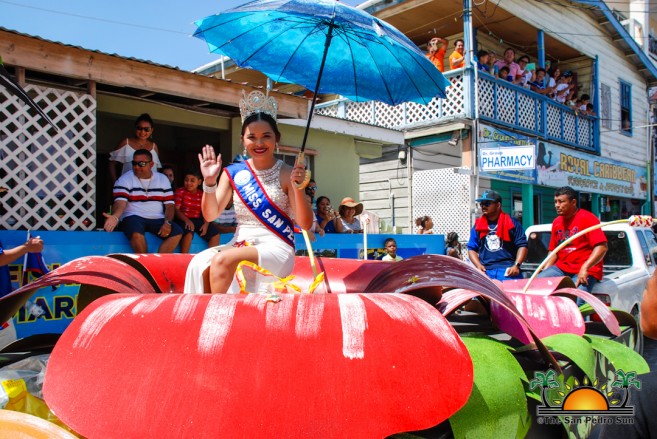 The full celebration kicked into high gear at the annual Jump-up Parade. Close to noon, the crowd of participants and their respective floats gathered at the Boca del Rio Park before making their way down Laguna Drive and onto Pescador Drive before ending at the Central Park. Crowds of onlookers eagerly gathered along the parade route, excited to see the various floats, and catching candy that was tossed throughout the parade. 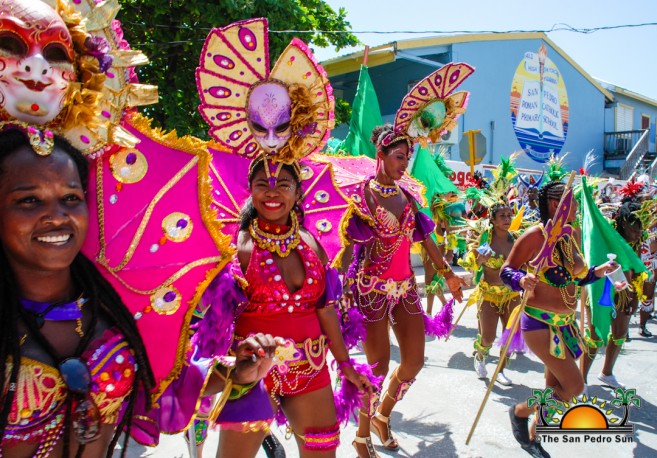 Leading the parade was The San Pedro Traffic Department along with the San Pedro Fire Department, followed closely by the San Pedro Police Department proudly carrying a large Belizean Flag. Just behind them was Miss San Pedro Virginia Vasquez, who greeted the crowd from her beautifully decorated float that represented the native flora of Belize. During the parade, both Mayor Daniel Guerrero and Area Representative Honourable Manuel Heredia Jr., along with members of The San Pedro Town Council handed out candy to the children and spectators on both sides of the parade route. Several businesses had patriotically-designed golf carts, and to amp up the celebratory vibes, DJ Debbie kept a group of revellers dancing to the tunes of Soca hits all through the parade. Just behind the revellers were different carnival bands, including the winners of this year’s Belize City’s grand carnival road march- Titans Mas Band. Sandy Toes Beach Bar had its own ‘big truck’ crowd as well, with tons of happy friends dancing behind. Following behind was the People’s United Party (PUP) with their white and blue flag and happy supporters under the theme “Belize First”. Behind them came the island’s Mystic Mas band, sponsored by the PUP. The costumed dancers had their choreographed routine, and they danced enthusiastically behind their ‘big truck’ as well.

Judges were stationed at key locations tasked with deciding a winner of the parade. While there was a lot of celebration and festive vibes, there could be only one, and at the end of the day, the winning title went to Mystic Mas Band. 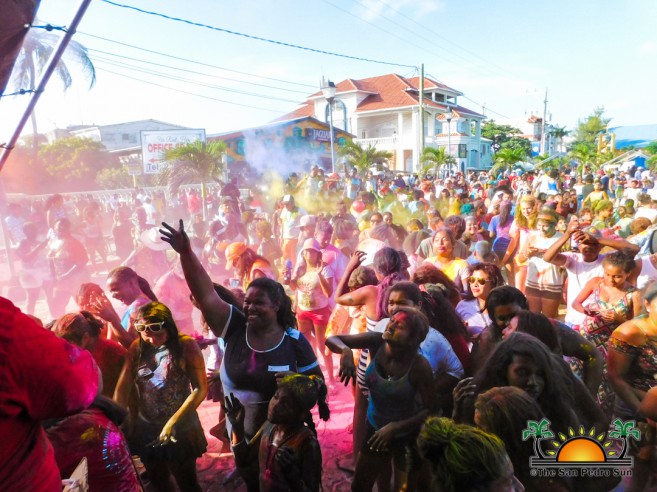 The parade ended at Central Park, where participants and spectators joined in waiting for the flying piñata. A new tradition started by Mayor Daniel Guerrero, a helicopter flew overhead, dropping treats to the waiting crowd below. After the ‘piñata’ flew off, a spectacular powder after-party began. Full of vibrant, colourful powder, the party surely gave the September celebrations a spectacular finish.

Another Halloween to remember at Holiday Hotel