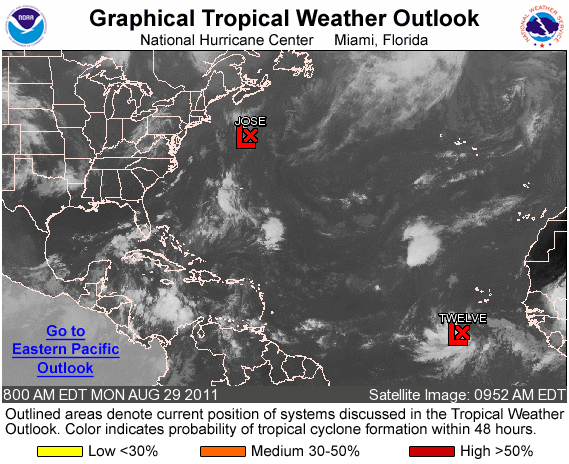 Feature(s) of Interest: Tropical storm Jose in the NW Atlantic north of Bermuda is dissipating as it heads northward over colder waters (Fig. 1). Meanwhile, the newly formed tropical depression Twelve was located in the eastern tropical Atlantic SW of the Cape Verde Islands around 9:00 am local time, near latitude 9.8N and longitude 27.5 W, and was moving westward at 15 mph. A turn toward the WNW with some increase in forward speed is expected during the next 48 hours. Maximum sustained winds are 35 mph, with higher gusts. Some strengthening is expected during the next couple of days and the depression could become a tropical storm by tonight. The extended model projections have this tropical disturbance heading west at first then veering to the WNW and NW as it nears the Lesser Antilles. By Tuesday of next week the forecast track takes the tropical cyclone north of the northernmost Leeward Islands.

Meanwhile, over the Caribbean Sea, extensive tropical moisture is evident south of Jamaica, associated with a divergent pattern aloft west of a weak upper level trough extending into the central Caribbean. This feature will move little and eventually dissipate by mid week. Precipitable water will remain in excess of 50 mm over northern Central America and the western Caribbean today, while low pressures will dominate the lower layers of the atmosphere over the NW Caribbean this working week. We can therefore expect more outbreaks of showers and thunderstorms this week, especially inland during the afternoon and evening, and over the sea and coast during the morning. The activity will diminish on Saturday and Sunday.

Daily rainfall totals will range from 0.25 – 0.50 of-an-inch in the heavier showers or thunderstorms over the hilly areas of the interior during the afternoon hours and along some areas of the coast and the sea in the morning. Otherwise, it will be partly cloudy, hot and muggy across the nation this week, typical of September climate in Belize…FULL REPORT

Letter to the Editor: Feed Crocodiles is Illegal