Home » Environment » How to Vote in The People’s Referendum

How to Vote in The People’s Referendum 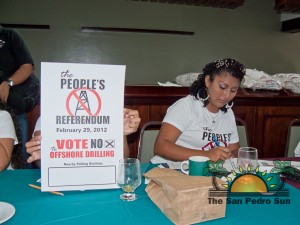 Wednesday, February 29, 2012 is the day when all registered voters of Belize will be able to go to the polls to vote on the issue of offshore oil exploration and drilling as the Belize Coalition to Save our Natural Heritage will be carrying out a national People’s Referendum allowing all registered Belizeans to vote on the issue. The Coalition is aiming at capturing the opinion of at least 10% of the registered voters.

The People’s Referendum gives voice to the thousands of Belizeans who never got a chance to vote when the offshore referendum triggered under the Referendum Act and was derailed on the basis of unverifiable signatures. The unverified signatures were largely based on inconsistencies between signatures on the record cards at the Election and Boundaries Office and the signatures on the petition forms.

On Saturday, February 25, a meeting was held to update leaders and volunteers from around the country on the voting process. Polling stations around the country will be open for voters to cast their vote on the people’s referendum regarding offshore oil drilling.

Central Park is the Ambergris Caye polling station, and will be open from 6AM through 8PM. There, voters will be able to cast their vote on this pressing national issue, which, according to Oceana and the Belize Coalition, could determine the future of Belize on the issue of offshore drilling.

Once the polling station is closed, the full ballot box is taken to the counting station, accompanied by the attending Justice of the Peace. Ballots are counted, and the final tally is called in to Oceana. The Belize Coalition to Save our Natural Heritage remains committed to achieving a ban on oil exploration in Belize’s offshore and in the protected areas, and all its member organizations remain united in the fight to achieve a ban.