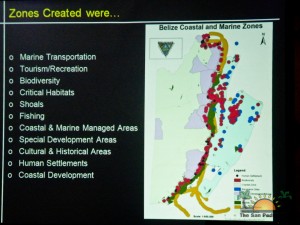 The Integrated Management plan is divided into ten areas and looks at three scenarios of development over a 15 year period. One of the ten areas is Ambergris Caye and encompasses the entire island and flats around, mangroves swamps, inland lagoons, the reef directly in front of the island and the seabed around the caye. According to the Chief Executive Officer of CZMAI Vincent Gillett, Ambergris Caye is a little ahead of other areas since the San Pedro Master Plan will be integrated into the Belize Integrated Coastal Zone Management Plan. According to Gillett, there are important factors for Ambergris Caye being considered in terms of development, tourism inflows, increase in population, impacts of development, degradation of critical habitat, plan of resource use and available infrastructure and planned development.

With the use of a computer module and the introduction of indicators, the management plan looks at three scenarios of development over the 15-year plan. The module being used is the Marine InVEST which incorporates ecosystem services and valuation approaches into planning. It can inform a variety of policy, managed and conservation approaches when the scientifically proven variables are put into the module. In developing the integrated plan for Belize, since there is limited scientifically proven data available, data from similar Caribbean countries is used when building the module. Once the scientific variables and data are inputted into the computer, stress indicators are placed into the computer module and indicate three different module scenarios. The three module scenarios look at is a complete conservation approach, heavy development approach or a compromised/middle of the road also referred as preferred approach.

Gillette explained that once the stress indicators are placed into the module, it paints an idea as to how the given area looks over a certain period of time. With the explanation of technicians, hopefully the community will be better informed and will consider what type of development and management plan the community wants to adopt.

The purpose of the consultation was to present, listen to issues raised and document recommendation from stakeholders. The consultations that are being held in various parts of the country are seeing the participation of various government agencies, private sector representatives and other key players in various coastal communities. Despite the low turnout, it is the hope of CZMAI that when the final draft is completed, that will be a larger public participation.

From El Divino to Pineapples- In pursuit of delicious lobster26 Photos