« Older: The San Pedro Sun partners with Oceana on International Beach Cleanup Day
Newer: » Residents are encouraged to start the sorting of garbage

In an effort to beat the heat we aimed at starting at 8AM, and more than half of our 13 volunteers were teenaged members of the Leo’s Club. The day offered many insights and threads of hope for not only the youth of today but the island as well. After all, since when do teenagers get up on a Saturday morning to pick up trash? Not only were they cheerful and willing to work, but they wore their Leo t-shirts and vests with pride…if they are the future of our San Pedro Lions Club then we are in for exemplary leadership and focused commitment to the community…we are in good hands! 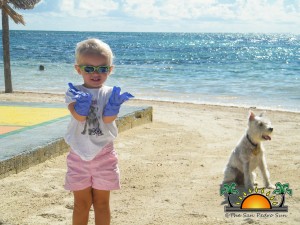 Starting at even a younger age was one mommy volunteer with her toddler daughter who donned latex gloves three times too big for her tiny hands and walked the beach in search of trash. Of course this exercise lost its fun in a short amount of time but what a great way to start teaching your babies the importance of keeping it clean while protecting the beaches we love to play on. I used to drag my young son to the same kind of things, from picking up garbage to counting endangered frogs in Wyoming, and as he grew older the louder his protests were, but now as a young man he thanks me often for the experiences that gave him a view of the world that he would have never considered or appreciated before.

As a part of the International Coastal Cleanup campaign our job was also to inventory the types of trash we were collecting. By doing so the Ocean Conservancy can then compile the data and get a global picture of what types of trash is washing up on our beaches. With this knowledge they can identify the source of many of these items and work with stakeholders in remedying the problem. During the cleanup I could not help but think of an interview The San Pedro Sun conducted a few weeks ago when covering the story of artifacts being found while excavating the Saca Chispas field. According to archaeologist Silvia Batty part of the area was filled with community garbage in its early stage of development and as such one of the best places to search for evidence of the way people lived in certain areas. Trash can tell you what they consumed and gain an understanding of how people lived years ago. But to me it doesn’t have to be ancient trash to tell the story of how we are living right now.

While we scoured the beach with our biodegradable garbage bags and latex gloves generously provided by Oceana, it did not take long to determine that many of our bad habits are boldly reflected in our trash…candy wrappers, ‘ideal’ pouches, plastic soda and juice bottles, rum bottles and tops, Styrofoam food containers and plastic forks to name a few, but the two most abundant items were cigarette butts and Belikin beer caps…by the hundreds. How ironic that our less than healthy behavior of drinking and smoking not only pollutes our bodies but our planet as well? Now that’s something to ponder….

Far be it from me to say I do not partake in such vices, and I am sure I am not the only one who does so without regarding the health consequences, but sometimes you just don’t give a damn, and that is our right as an individual. What isn’t our right is to inflict our bad habits on others, such as irresponsibly disposing of cigarette butts and bottle tops. You may think it is a small thing but when you spend a couple hours bent over picking them out of the sand you soon realize that all those little things DO add up. Our bad habits should only belong to us, not the community we live in as well.

Everyone should spend a couple hours combing the beach for garbage. It is an eye-opening experience that provides plenty food for thought, and picking up after someone else can really irk you after a while. After all, who really LIKES picking up garbage? Fueled with a new resolve I can tell you one thing, the remnants of my bad behavior will come home with me in the pocket of my shorts, not on the beach. How about you?