Residents are encouraged to start the sorting of garbage 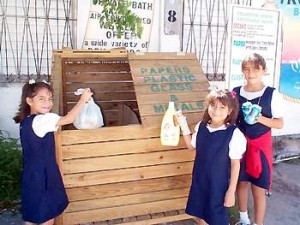 After Hurricane Keith, the Environmental Restoration Program attempted to introduce the idea of sorting garbage as part of its campaign.

Residents on Ambergris Caye are being encouraged to begin the sorting of garbage ahead of the implementation of the national Solid Waste Management Project (SWMP) of which Ambergris Caye is a part of. The announcement was made by the San Pedro Town Council (SPTC) via a press release last week. The sorting of garbage at this point is aimed to have the residents trained in garbage classification, which will be required when the SWMP comes into full effect.
Speaking to Kenrick Brackett, San Pedro Town Councilor responsible for Waste Management and Sanitation on the island, he said that residents are being asked to sort out garbage into two main groups, biodegradable and non-biodegradable. “We want the residents to classify the garbage and bag them into biodegradable and non-biodegradable. How this will work is that we are asking them to use red ribbons or an old piece of red cloth for non-biodegradable and a green ribbon or old green cloth for the biodegradable garbage,” said Brackett. The classification of the garbage into two separate groups said Brackett will “teach residents from now and [will be] practice for when the projects kicks in.”
Biodegradable waste is considered anything that will eventually break down and become part of the earth and soil, like food scraps and paper. Non-biodegradable waste will NOT break down (or won’t for many, many years). Examples are plastics, metal and glass. Some dangerous chemicals and toxins are also non-biodegradable. Plastic grocery bags, Styrofoam (polystyrene) and other similar materials will eventually break down over (a very long) time.
The preliminary site layout for the SWMP on Ambergris Caye includes an administrative building with ample parking area and suitable access to the site. There will also be a transfer/loading building in which the collection trucks will discharge the garbage onto a tipping floor. It will be at that stage that waste pickers will identify recyclables for baling. A storage area will also be constructed to store the baled recyclables recovered from the transfer loading building. There will also be a Material Drop-off Facility. Once sorted, residual garbage (garbage left after sorting) will then be barged to the mainland and hauled to mile 24 on the Western Highway at the Regional Sanitary Landfill for final disposal. Upon completion the SWMP transfer station in San Pedro Town will sit on a total of 2.5 acres of land.
It is expected that this year alone, Ambergris Caye will generate some 3,480 short tons of solid waste from commercial and residential usage. One short ton is equivalent to about 2,000 pounds, so 3,480 short tons will be approximately seven million pounds. It is projected that by the year 2030 the island would be generating approximately 8,173 short tons of garbage per year or 37.5 million pounds per year.
Brackett said that there will be a media campaign to educate the residents what is considered biodegradable and non-biodegradable. In addition, residents will be demonstrated how to separate the garbage. There was no indication as to when the campaign will start but Brackett said “very shortly.’ For the time being, residents are also advised to discontinue dumping garbage in empty lots. The SWMP is expected to be fully functional in early 2013.