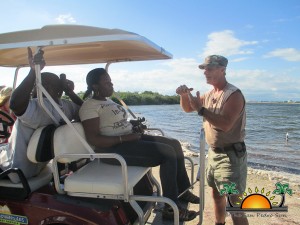 American Crocodile Education Sanctuary (ACES) provided crash-course training for the Belize Forest and Fisheries Department (BFD) officers on Wednesday January 16th. Hampton Gamboa, Rasheeda Garcia, Judene Tingling and Jose Baki were taught proper methods of safely trapping and snaring crocodiles in the wild to remove them from populated areas. The American Crocodile is protected under the constitution of Belize and therefore it is considered illegal to feed, capture, or disturb crocodiles. It is also illegal to sell their remains or crocodile products. American crocodiles are endangered species with less than 10,000 still remaining and numbers dwindling due to poaching activity.

With the large scale developments on Ambergris Caye, the crocodiles’ natural habitats are ever-shrinking, and the end result is crocodiles coming in close proximity to humans. The more humans interact with these animals, especially by feeding them (whether directly or indirectly), the more the crocodiles lose their fear of humans, and that can lead to unfortunate attacks on people. The fact is that many islanders continue to tamper with the remaining island crocodiles, in the process, placing themselves in danger and disturbing the life of the crocodile. No 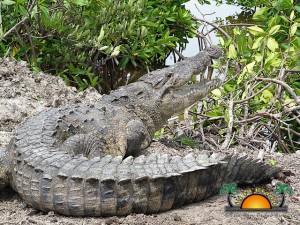 matter how used to humans a crocodile is, it is scientifically proven that these animals are apex predators and never lose their instinct to attack. As such, the training provided by ACES was invaluable, teaching the officers the proper method of the species’ removal while avoiding harm to the animal.

Wildlife Officer Rasheda Garcia stated that her department is more than happy for any sort of training from ACES when it comes to dealing with the crocodile, and she found the training most beneficial. The BFD is also planning for more in-depth course training from ACES in the near future. The San Pedro Sun also spoke to Vincent Rose, co-founder of ACES, to get insight on what the training entailed and he told us that ACES’ mission is to safely relocate troublesome crocodiles in order to conserve the species. “It is a necessity to educate persons on the proper ways to deal with crocodiles,” said Rose. Following proper procedure ensures the safety of the public and the animal. Rose also shared disturbing news with The San Pedro Sun on the recent discovery of many headless crocodiles – a clear indication of poachers on the island. This unsettling report is particularly disheartening as ACES is working hard to preserve this ancient species through education and conservation, always stressing the importance of the crocodiles in creating a stable environment. Rose ended his interview stating that Ambergris Caye is in desperate need of a stationed wildlife ranger to look after irregularities of the law and to ensure that proper protocol is followed when dealing with law-breakers. 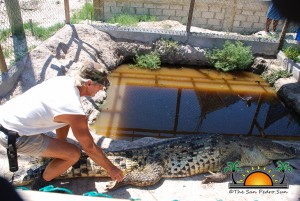 Due to an under-resourced and under-staffed Fisheries and Forest Department, it is difficult to ensure that the laws on the proper conservation of this animal are being upheld. As such, it was quite disappointing that the community of San Pedro did not show up to the public meeting scheduled on Thursday January 17th. Garcia expressed her disappointment at the non-attendance, as the meeting was to be part of a public awareness effort on the role and responsibilities of the Forest Department and to discuss changes and issues encountered in the island. Despite constant complaints about the lack of laws and regulations, or the lack of enforcement, the community did not show up to the meeting, demonstrating very poor community effort from the public.

Both Garcia and Rose agree that the only way the issue with wildlife can be solved is by community awareness and support, which is not as present as desired. Rose would like to remind the public that any crocodile related issue should be reported to ACES (631-6366/666-3871) and that it is illegal to interfere with these animals.