The San Pedro Town Council (SPTC) along with the United Nation International Children’s Fund (UNICEF) continues their cleanup efforts. A previous clean-up campaign was held in the area of San Mateo, where the SPTC and UNICEF invited all residents to participate in the campaign by picking up garbage off the streets and cleaning up their yards. The initiative in San Mateo sparked interest that generated a movement to promote sanitation and cleanliness. 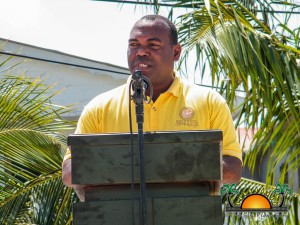 On Tuesday March 19th, the clean-up campaign moved to a new territory, the San Pedrito Area. Heading the movement is Councilor Kenrick Bracket,whose portfolio deals with waste management and traffic. The “Don’t mess with San Pedrito” campaign is just another chapter in the SPTC’s beautification project for the island.

The event took place at the San Pedrito Park shortly after 9AM. The event started with an opening ceremony led by Master of Ceremonies, Angel Nuñez. Even though very few residents attended the ceremonies, the event still went through.

After a short prayer by Clive Welch, Mayor Daniel Guerrero addressed the crowd explaining the purpose of such events. Mayor Guerrero stated that the poor attendance will not stop the clean-up campaign. Guerrero explained future development plans for the area and asked for the continued support from the public. Guest Speaker Christine Norton, UNICEF representative 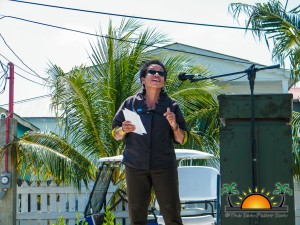 for Belize, added to what Mayor Guerrero stated, saying that San Pedrito is a “learning community… where children are raised not only by parents but by the entire neighborhood.” Norton also ensured Mayor Guerrero and the public of San Pedro that as long as there are means, UNICEF will continue supporting and advocating the clean-up campaign.

Both Miriam Codd, Representative for the Ministry of Education, and Lisa Tillett, Representative for the Ministry of Health, added that the clean-up campaign is intermingled with both education and health. Tillett pointed out that cleanliness is derived from habits at home and went on to state that we should “treat your home as your castle.” Good hygiene and cleanliness can act as preventative methods for various diseases and virus such as dengue fever or malaria.

Councilor Brackett thanked all those that took the time to come out and support the cause. Bracket along with the SPTC will be visiting homes in the San Pedrito Area where they will embark on educating families on proper garbage disposal methods.

The next step for SPTC’s clean-up campaign in the coming months will be the DFC area. Brackett asks that all residents of San Pedro Town properly sort garbage for disposal and not to litter. Let’s keep La Isla Bonita clean!