« Older: Letter to the Editor: VIP on the littering of garbage
Newer: » US Embassy Celebrates Earth with Reusable Bags program in San Pedro


Oceana Belize and the Belize Coalition to Protect Our National Heritage have called for a complete moratorium on any offshore oil exploration in Belize territorial waters. The Non-government Organizations (NGO) resoundingly rejected the Government of Belize’s draft guidelines for petroleum exploration, which was first issued in September 2013 but unknown to the NGO’s until January 19, 2015. 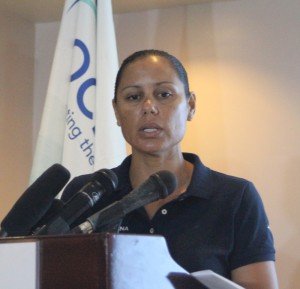 In a letter penned by Oceana Belize Vice President Janelle Chanona and addressed to the Minister, Hon. Senator Joy Grant on March 2, the NGO also called on the Ministry of Energy, Science Technology and Public Utilities to reassess the potential risks and benefits of oil exploration, pointing out the many flaws in the guidelines. Chanona and the Coalition’s Tanya Williams shared their concerns at a press briefing at the Belize Best Western Biltmore Hotel in Belize City last Thursday, April 23.
Oceana’s complete response to the Government of Belize’s (GOB) draft guidelines is a volume four inches thick, but the 18-page executive summary made the point that Belize’s marine resources presently contribute over $600 million annually to the Belizean economy, and the draft guidelines make no effort to balance this existing bounty against the potential risks and dangers of any offshore oil exploration and/or exploitation.
In addition to the present economic contribution, Belize’s pristine marine areas are attracting many new Foreign Direct Investments (FDI’s) which Prime Minister Hon. Dean Barrow often refers to in his budget speeches and other national addresses. These new FDI’s include Norwegian’s proposed cruise ship port on Harvest Caye, Leonardo Di Caprio’s proposed development on Blackadore Caye, the proposed Stake Bank cruise ship port and resort, and the luxurious 8-star Puerto Azul development proposed for Northern Two Cayes. Yet all of these developments would be endangered by any oil exploration/ exploitation, with the possible risk of an oil spill, which GOB and the Department of the Environment (DOE) admits they are completely unprepared and ill-equipped to manage. This was made clear when DOE presented their draft Oil Spill Contingency Plan to the media and NGO’s at the Biltmore the week before.
The guidelines’ map of proposed exploration areas would make it appear that Prime Minister Barrow is paying only lip service to marine conservationists’ concerns. GOB had hosted a delegation from the World Heritage Center (WHC) and the International Union for Conservation of Nature (IUCN) in January this year, coincidentally when Oceana and other NGO’s received a copy of the oil exploration guidelines. The WHC delegation’s visit was an effort to have some of Belize’s sites removed from the WHC danger list, and PM Barrow reportedly expressed willingness to chart a course forward and confirmed government’s policy of prohibiting oil exploration within and adjacent to protected areas in the Belize Barrier reef system. The main reason Belize was on UNESCO’s “Sites in Danger” list was the proposed oil exploration and exploitation.
Falling oil prices and the Belize’s need for energy independence have driven the country’s energy experts in Joy Grant’s ministry to seek and encourage new energy projects from sustainable sources and low-carbon technologies, in keeping with the national plan to make Belize more resilient and adapted to climate change. Giving out oil exploration concessions that would endanger a major driver of Belize’s economy is incongruent with a sustainable energy plan.
While Belize’s Barrier Reef system is the second largest in the world and the largest in the western hemisphere, it is already under threat from climate change and its evil twin, ocean acidification. Warmer temperatures and more acid seas are already causing coral bleaching as the coral polyps die, leaving a whitened graveyard; to add oil exploration would only exacerbate the problem.
Chanona’s letter also lamented that the guidelines do not follow Belizean law, nor are they in line with Government’s obligation to manage Belize’s marine resources for the good of the Belizean people. They also ignore public opinion; as 90 percent of the 30,000 Belizeans who participated in a public referendum organized by Oceana and other NGO’s a couple years ago voted against offshore oil exploration.
In terms of legality, Oceana cites the Supreme Court judgment of April 2013 in which Justice Legall ruled that to allow oil exploration in any offshore area without a prior Environmental Impact Assessment, as required by the Environmental Protection Act, would be illegal, “irresponsible” and “reckless”
The Oceana statement goes on to extol Belize’s World Heritage sites internationally recognized by UNESCO, such as the famous Blue Hole atoll; and how Belize’s barrier reef already serves the nation with wealth untold: providing clean air and water, food, jobs, medicines, a wide variety of wildlife which have all become a part of our cultural identity. 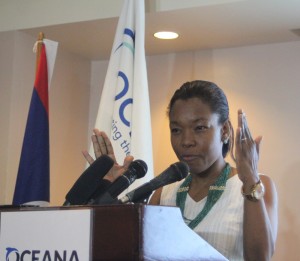 Oceana points out that the proposed petroleum exploration zones being offered for license straddle much of the Belize Barrier Reef System, which includes seven protected areas: Bacalar Chico National Park and Marine Reserve, the Blue Hole Natural Monument, the Half Moon Caye Natural Monument, the South Water Caye Marine Reserves, the Glovers Reef Marine Reserve, the Laughing Bird Caye National Park and the Sapodilla Cayes Marine Reserves. Belize’s waters also enclose five marine protected areas which the Fisheries and Forest Departments co-manage along with NGO’s like the Belize Audubon Society and the Toledo Institute for Sustainable Development.
Not only would giving out oil exploration permits compromise our World Heritage site status with UNESCO, but Belize’s marine eco-systems form an important habitat for a number of threatened species already targeted for conservation efforts such as the West Indian manatee, three species of turtles – green, hawksbill and loggerheads, the American crocodile, as well as many bird species.
It’s hard to put a dollar value on things of such intrinsic value, but a study by the World Resources Institute in 2008 estimated that the value of the reef in fisheries, tourism and shoreline protection contributed $700 million to Belize, higher estimates peg the value of the reef closer to one billion dollars annually. All of which would be put at risk by ill-considered issuance of oil-exploration contracts with the inherent risk of an oil spill.
Tourism alone brings in $680 million annually and by far the biggest and most popular attractions for visitors are the marine protected areas, and this is according to the government’s own statistics, as compiled by the Belize Tourism Board.
Commercial fisheries bring in only about US$14 – $16 million annually for a about 4,500 licensed fishermen and their families, but sport fishing already provides 2,000 jobs, and the Bonefish Tarpon Trust estimates sport fishing contributes about $100 million annually to the Belize economy.
Oceana’s statement went on to itemize the many impacts of any future oil exploration, even seismic studies and the already existing risk of an oil spill just from tankers transporting fuel to Belize’s ports and the exportation of Belize’s petroleum. No one in the oil industry can forget the Deepwater Horizon accident in April 2010 which leaked almost 500,000 barrels of oil (National Geographic estimated the spill at 200 million gallons of oil) into the Gulf of Mexico and cost the owners of the oil rig, British Petroleum BP, over US$20 billion in clean-up and damage compensation costs. Such a scenario is the stuff of nightmares for the tourism sector when they consider any oil exploration in Belizean waters.
The statement also points out how woefully ill-equipped Belize is to adequately monitor and police the oil exploration companies who have come “wildcatting” in Belize, and the ludicrous ways they have improvised to drill for oil; for example the Island Oil company which strapped together 40-foot containers filled with Styrofoam as a jerry-rigged way to float their drilling rig. This rig capsized while being towed to port in 2007, killing a Belizean worker.

Injured crocodile Phineas fully recovered and back in the wild