The Department of Environment (DOE) and Belize Fisheries Department are currently conducting an environmental damage assessment at Glover’s Reef Atoll where a Guatemalan Navy Ship ran aground into the reef. The incident occurred sometime in the late hour of Wednesday, June 10th, but a report was not made until on Thursday, June 11th. Apparently, the 65-foot vessel, bearing the marking GC-651 Tecum Uman, and enroute Isla Mujeres, Mexico, experienced mechanical problems and drifted into the crest of the reef. The grounding occurred about 500 meters north of Middle Caye. The vessel was removed on Saturday, June 13th. 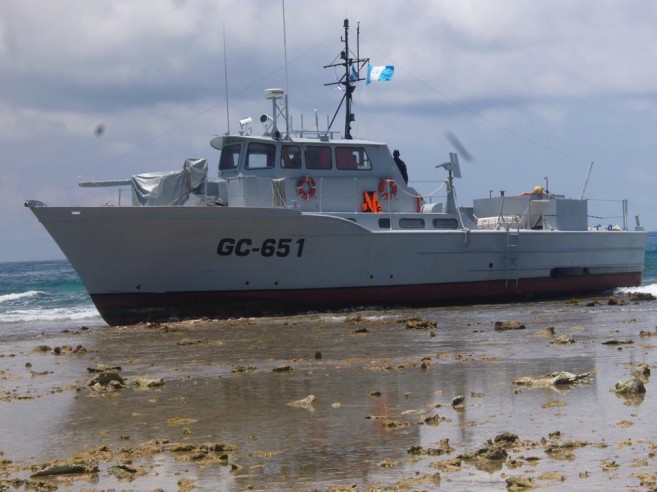 Personnel from the Fisheries Department, the Belize National Coast Guard and the Belize Port Authority were immediately dispatched to the area after the news broke of the grounding. The priority was to remove the vessel at the earliest convenience to avoid further damage to the reef. The team supervised initial efforts to remove the vessel from the reef, taking into consideration the safety protocols for both human life and the environment, as well as the integrity of the vessel. At about 5AM on Friday, June 12th a tug boat from Guatemala arrived to remove the vessel from the reef crest. However after several attempts, it was determined that additional ropes were necessary to safely remove the vessel because the ropes the tug boat was using kept breaking, and as such, additional ropes needed brought in from Guatemala. The ropes did not arrive until Saturday, June 13th and by 11:40AM the vessel was finally successfully removed.
But many citizens are concerned as to why the Guatemalan vessel was even in Belizean waters. According Chief Executive Officer of the Ministry of National Security, Retired Colonel George Lovell, “They were within the international waters. There’s a 12 mile limit and they were in the international waters when they experienced difficulties and they drifted into our reef.” Lovell continued by stating that Mexican authorities had confirmed that vessel were supposed to dock at a port in Isla Mujeres for a training seminar. “Belize Coast Guard were able to confirm with Mexico that the Guatemalans had a port of call. So, it would appear that it was a legitimate passage. In addition, our coast guard that were on the ground had an opportunity to speak to the crew of the vessel and they confirmed that they had lost steering and that’s how they drifted onto the reef. They were heading from Puerto Barrios, Guatemala to Isla Mujeres, Mexico as part of a training exercise,” said Lovell.
It was further confirmed that it wasn’t just one Guatemalan vessel travelling to Isla Mujeres but two. After one of the vessels grounded, the other remained within Belizean waters to provide assistance. “In our dialog with Guatemalan officials we confirmed that there were two military vessels travelling from Puerto Barrios,” said Belize Coast Guard Commander, Elton Bennett. He explained that both vessels claimed ‘Innocent Passage’. “Naval vessels from other countries are allowed to pass through Belize’s territorial waters under something called Innocent Passage, which allows military vessels to traverse outside of the baseline of the country, as long as that transit is continuous and expeditious. Since this was an accident, we could not hold them liable for being there without authority. On board the two vessels were officer cadets from the Guatemalan Naval Academy, along with their instructors who were on the exercise, so this confirms that they were not here on a military operation but just passing by,” said Bennett.
While the level of damage caused to the reef is still uncertain, a preliminary assessment of the incident has indicated that the grounding occurred in an area comprised of ‘bear rocks’ with only two coral species, Fire Coral and Elkhorn Coral. “The design of the vessel, having jet propulsion and a flat bottom, has been attributed to the reason for minimal damage observed during the preliminary assessment,” said DOE. A claim has been lodged to the Guatemalan Government and, once the environmental damage assessment is complete, they will have to compensate for the damage to the reef.
The vessel along with those on board has been returned to Puerto Barrios.
Once completed, the Environmental Damage Assessment Report will be forwarded to the Ministries of National Security and of Foreign Affairs.