The annual turtle nesting season begins in May and runs through November, and with the 2016 Turtle Nesting Season officially commenced, biologists at the Ambergris Caye Marine Turtle Program went on a quest to discover turtle nests in Robles Point on Monday, May 9th. After the group’s first trip, there were no visible observations of turtle nests, but the group knew that turtles would soon start to lay their eggs. A second trip was made on Tuesday, May 20th, where the group discovered three loggerhead sea turtle nests; two in Basil Jones, and one in Rocky Point Beach.
Marine life is synonymous to Ambergris Caye, and the three varieties of sea turtles: the Loggerhead, the Green turtle, and the Hawksbill, are all endangered species. When it’s time to lay eggs, sea turtles return to the sandy beaches in search of a well-protected nesting area. Depending on the species, a mature female turtle can lay from 70 to 190 eggs, and it takes a span of six to ten weeks for the hatchlings to emerge. After the eggs hatch, the young turtles must make their way the sea, in hopes of reaching maturity. 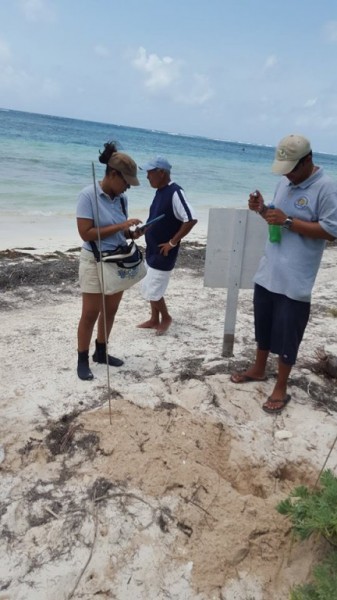 Just as other reptiles, amphibians, and mammals, many threats contribute to the extinction of their species. Human activity is the most prominent threat to the sea turtles, and the public is encouraged to be mindful. According to Kirah Foreman Castillo at the Hol Chan Marine Reserve, “golf carts are known to run over turtle nests and compact the sand. We advise everyone to respect the signs, and be careful when traveling across the beach, especially at night.”
The other threats to animals are predators. In the case of the sea turtles, raccoons are the culprits who raid their nests and eat the turtle eggs. Beach erosion and excessive trash are also major conflicts that Roble Point is experiencing, as receding coastlines are filled with trash. This becomes a hazard for female turtles who travel ashore to choose their nesting area. Since plastic is the main source of trash on the beach, it breaks down into tiny fragments, which pose a threat to hatchlings that are just starting their journey. Garbage can easily be mistaken for food by many different marine animals, not just sea turtles. 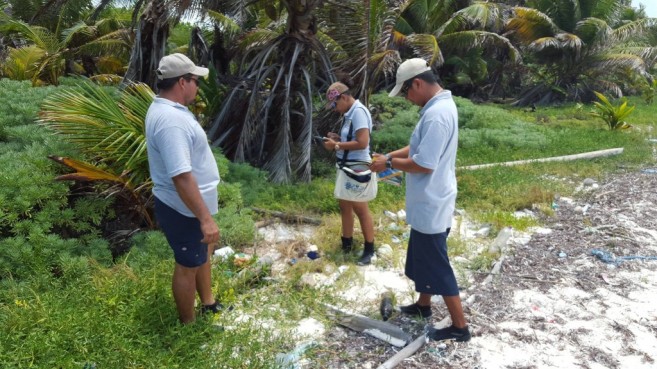 Artificial lighting is also detrimental to turtle nesting. “As development spreads further up the coast, artificial lighting directs the hatchlings to the pools instead of the ocean, causing the turtles to become disoriented,” said Foreman Castillo. Hatchlings usually have the tendency to follow the brightest direction which is the sea reflecting light from the moon.
Although the number of turtle nests fluctuates each year, the Ambergris Caye Marine Turtle Program hopes to have a busy year. The public is reminded that poaching turtle nests or sea turtles is illegal. A person could face criminal charges if caught having turtle products, including the carapace, eggs or hatchlings. Everyone is encouraged to practice caution when traveling the beach, as well as report stranded hatchlings, suspected turtle nests or turtle crawls along the beach to the Hol Chan Marine Reserve Office at 226-2247.