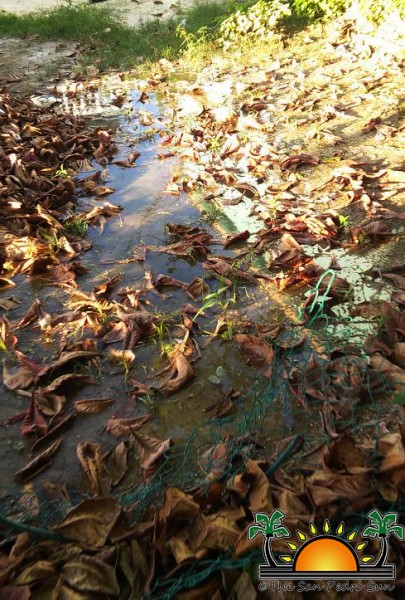 Reports have surfaced from residents in the San Juan Area of San Pedro Town that an apartment building, in the same area, was dumping raw sewage on the lagoon side. Those being directly affected are concerned about the effect it has on the environment and their health. The San Pedro Sun has since contacted the relevant authorities to find out what is happening and what they are doing to address the situation.
Initial complaints were that almost every weekend, the management releases the building’s black water onto the street. Residents believe that the intention is for the waste water to drain into the lagoon. However, every time this is done, it floods neighbouring yards and streets. They report that huge puddles accumulate, with an unbearable stench that lingers for hours until the waste is soaked into the soil. Neighbours are equally concerned about the health issues such a practice can cause, especially to the children who play in the yards where the waters settle. To make things worse, some claim that the huge puddles sometimes last up to a week on the street before drying out.
Residents claim they informed the island’s Health Inspector, who upon visiting, told them he would provide an order for the complex to cease business operations until the problem was fixed. Weeks passed, and there was no sign of the order being issued, with the apartment complex continuing to improperly dispose of its sewage.
Health Inspector, Horris Patten stated that they are working with the building’s proprietors finding a temporary solution until the building is connected to a new sewage system currently being installed in San Pedro Town by Belize Water Services Limited (BWSL). “We have discussed with the owners of the apartment building to dispose of their waste appropriately and regularly. The construction of another septic is not recommended, and so far the situation is being contained,” said Patten. He mentioned that the main problem is the building’s septic reservoir, which does not have the capacity to hold all the waste generated by the apartment complex.

The Ambergris Caye Local Building Authority (ACLBA) is aware of the situation and weighed in on the matter. According to Fidel Ancona from the ACLBA, some people build differently from their approved building plans. In this particular incident, he believes that there was no follow-up in ensuring the apartment complex was built according to its original plan. “Monitoring is an essential part of the process, and I believe that this is where the weakness lies,” said Ancona. “We are working to address such procedure.” He added that both the health inspector and building inspector should constantly check on construction projects. “While the Health Inspector is working with the proprietors of the building, we are also trying to get the situation fixed. We will have our building inspector check on it and at the end of our investigation we will decide how to proceed with this issue,” he said. According to Ancona, it is possible to close down a business if there is proof of building violations.

The proprietor of the building told The San Pedro Sun that they are doing their best to address the issue, which has many neighbours concerned. They are aware of the hazard the situation causes, and have come up with an alternative until they are connected to the town’s new sewage system. “We are transferring some of the waste into a larger septic tank that is in the same property and it has been working fine without any overflowing. When they are both full, we will have to pump them out.” According to him, they have been informed that they will be one of the first establishments to be connected to the new sewage system as early as September.
Mayor Daniel Guerrero is equally concerned. “It has been a problem from some time now and I will be discussing with the health inspector how best we can address the issue,” He said. “The Town Council will not tolerate anyone damaging the environment.” The Mayor refrained from any further comments until he personally looks into the matter along with the personnel from the Health Department.
Currently, the only identified regulatory body for sewage disposal in the country is the Department of Environment, (DOE). According to DOE, BWSL is the only authorized agent in San Pedro to dispose of sewage. BWSL counts with ponds south of town where raw sewage can be dumped with the company’s permission.
BWSL commenced work on a sewer expansion construction project on Laguna Drive on March of this year. The project is scheduled to take approximately six months to complete, and is expected to benefit 62 residents/businesses, primarily in the San Juan and Boca del Rio area of town.