Congressman Eliot Engel (D-NY) visited the Bronx Zoo-based Wildlife Conservation Society (WCS) research station at Glover’s Reef Marine Reserve on a Congressional delegation to Belize last month. The focus of the trip was to survey the impact of U.S. foreign assistance programs on livelihoods and conservation in one of the world’s most biodiverse areas. Congressman Engel is the first member of Congress to make an official visit to Belize since its independence in 1981, and the first ever to visit Glover’s Reef. 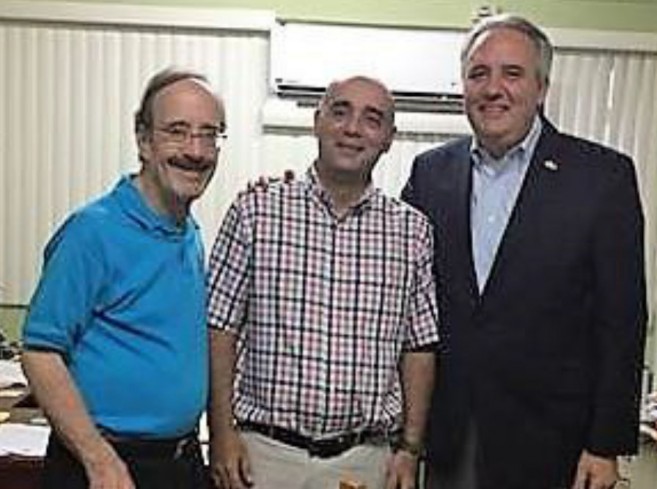 Congressman Engel, who is a leader in the U.S. House of Representatives on foreign affairs issues, was joined by WCS Executive Vice President of Public Affairs John Calvelli, WCS Belize Program Director Nicole Auil Gomez, and other Belize-based staff. The group traveled by boat to Glover’s Reef Marine Reserve (GRMR), an atoll 45 km offshore which is 86,654 acres in area. The atoll is a marine protected area (MPA), one of seven in Belize that makes up the UNESCO World Heritage
Site, the Belize Barrier Reef Reserve System.
At the atoll, the delegation toured WCS’s Research Station on Middle Caye, an island owned by WCS. The group boarded WCS’s vessel to learn about the sustainable fishing practices within the protected area and view demonstrations on how staff collect catch data information. They discussed biodiversity on land and sea, and the links between the activities on land and impacts to the sea, including the impacts of nutrient pollution from land based sources. Congressman Engel said, “Visiting the Research Station on Glover’s Reef gave me a window into the excellent work WCS has been doing in Belize for many years. I watched as WCS experts collected data on marine conservation, fisheries protection, and the increasing pollution of the waters off the Belizean coast. This is very important work and is deserving of continued USAID support.”
WCS work at Glover’s Reef, supported by the U.S. Agency for International Development and other federal agencies, has led to sustainable fisheries management decisions that are important for the livelihoods of the local population, including the implementation of the rights-based fishing system called managed access. WCS is combatting wildlife trafficking by working with the Belizean immigration, fisheries, forestry, and justice agencies with the support of the U.S. Department of State’s Bureau of International Narcotics and Law Enforcement Affairs (INL) and the U.S Fish and Wildlife Service. The program has also successfully introduced the Spatial Monitoring and Reporting Tool (SMART) to the Belizean government (primarily the Forest and Fisheries Departments) and protected area managers as a tool for helping to secure and manage the country’s natural resources. John Calvelli, WCS Executive Vice President of Public Affairs, said: “We are lucky to have a champion in Congress who understands how U.S. support for these programs advances U.S. national interests including food security and economic security. We thank Congressman Engel for his commitment to conservation and I hope his visit to Glover’s Reef was illuminating as well as enjoyable.” The group was lucky enough to view the abundant wildlife of the reef on the trip, including sharks, marine turtles, rays, and corals. Before returning to the mainland, the group encountered a pod
of bottlenose dolphins.