Hol Chan Marine Reserve management is planning to set up new regulations for filmmakers and underwater photographers at the Reserve. The new rules seek to prevent any potential damage that may be caused to the reef and marine life within the said protected area during such activities. This decision comes after a social media post by a local tour operator alleges that on November 3rd, while filming at Hol Chan, a film crew hired by Royal Caribbean Cruise Line behaved carelessly and caused damage to the Belize Barrier Reef. 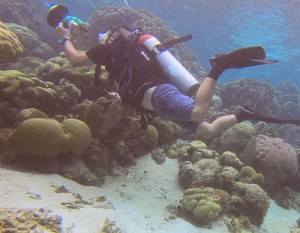 The accusations state that the film crew was touching, kicking and even standing on the delicate corals. The local guide, who was hired by the crew as a safety diver alleges that he kept advising them against these actions. However, they paid little attention to his instructions. “When I was hired as a safety diver, I was not aware that it was for the filming of a commercial until we got there,” says the tour guide. “The person, who asked me to go along, said they just needed me to watch over the divers in the water in case something happened.”
According to him, he kept an eye on the videographers in the water. “As soon as we got in I noticed that snorkeling videographers were kicking the coral, I popped my head up and told them they need to watch how they’re kicking as they can’t be doing that,” the tour guide explained. “Despite my warnings, the ill-actions continued. I became frustrated and left the site prior to the completion of the filming.” He adds that one of the videographers is an avid diver living on the island who kept resting on corals for extended periods. 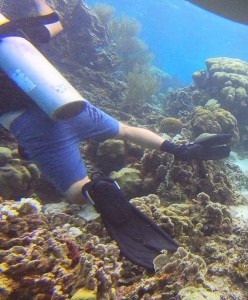 Hol Chan management investigated, and according to the Reserve’s manager Miguel Alamilla, it is too early to say how much damage was done. “We are still working on it, trying to measure the damage that may have been done,” he said. “We are also trying to inspect all of the areas where this activity occurred in order to come up with some conclusions.”
However, Alamilla indicated that the film crew had all the legal permits to be onsite and that the safety diver should have played a bigger role in monitoring the situation. “The safety diver is the person in charge of overseeing the activity and make sure everything goes well,” Alamilla explained. “At any given point, if he noticed that for some reason the crew was not complying with his instructions, he had the authority to stop the dive immediately,” Alamilla added that at times they cannot be onsite due to limited human resources, however, in such cases, the tour guide is in charge and responsible for the divers and the environment.
Alamilla further explained that in order to avoid any future incidents, film crews will now have to apply directly to Hol Chan for approval. “We are working on that service so they can make all the arrangements with us,” he said. “In the case of underwater photographers and videographers, we will do a background check on them to find out if they have the sufficient experience and responsibility to carry on these types of activities.” In addition, he said that for future groups of this kind, when approved, they will try to have a member of their staff onsite to monitor such activities. A date was not given when the new regulation will be implemented.
Hol Chan Marine Reserve takes this opportunity once again to remind the general public and visitors that marine life, including corals, should not be tampered with. Divers and snorkelers should avoid touching the coral, by all means, possible, as the simplest of touch can destroy the organism. To report any misconduct within the marine reserve, contact 226-2247.