The Department of the Environment (DOE) has temporarily shut down construction of an over-the-water structure in the Boca del Rio area as of Friday, November 17th. According to DOE, the proprietors did not obtain an Environmental Clearance permit prior to starting the construction. As such, they must apply for one in order to resume work.
DOE representatives indicated that they were not aware of the project until they were on the island conducting environmental inspections. After noticing the shell of the over-the-water structure, they proceeded to inspect it. They immediately found that it had not been granted the appropriate permissions from DOE. As such, the persons responsible for the construction were ordered to stand by until an Environmental Clearance was granted. DOE indicated that the project seemed to have consent from the local authorities, and perhaps other entities such as the Central Building Authority (CBA). However, by law, any over-the-water-building needs environmental clearance as well. 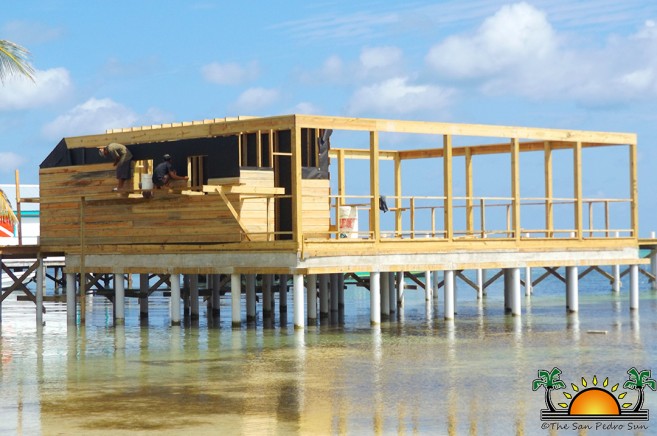 In San Pedro, local authorities confirmed that they were fully aware of the project and added that the structure will serve as the new location for one of the beach bars in the area. This relocation is expected to give way to The San Pedro Town Council’s (SPTC) beach reclamation project expected to start in 2018.
Fidel Ancona from the Ambergris Caye Local Building Authority (ACLBA) says that while over-the-water structures are still allowed by law, their responsibility is to only approve the architectural plan of the project. In regards to this specific building, Ancona indicated that the permission was not granted by the ACLBA, but most likely by the CBA.
Mayor Daniel Guerrero further stated that they had come to an agreement with the business owner to relocate the bar in order for them to start clearing the beach. “When tourists come to the island, they want to see beaches. So we decided to have that bar moved, and then we can start planning for the beach reclamation project,” said Guerrero, who indicated he was unaware of the stop order. “I recently found out about it, but as far as I know, an application to get the approval has already been submitted,” Guerrero said.
In regards to the expected beach reclamation project, Guerrero said that they have added several loads of sand along the Boca del Rio beach. “All that stretch from the Palapa Bar to the basketball court at the Bocal del Rio Park will be leveled with sand and turned into a real beach,” he said. “We are starting little by little, and when that happens, no vehicles will be allowed,” Guerrero explained that with the relocation of said bar, the final steps to create an ideal beach for San Pedro can commence.
On the other hand, DOE stated that if and when the Environmental Clearance is granted, they will be visiting the island to monitor the over-the-water structure construction. The SPTC is expecting to start with their beach reclamation project sometime after March 2018, which is the same month municipal elections will be held.