The Caye Chapel Development Group has proposed a US$250 Million 5-star resort to be built on the island over the next four years. They invited input from interested parties when they presented their Environmental Impact Assessment for the project at a public community consultation at the University of the West Indies School of Continuing Studies in Belize City last Thursday evening, November 30.

The project is expected to create as many as 500 new jobs during its construction phase and hundreds more once it is operational, explained Allan Herrera, who prepared the EIA. This included a social impact assessment, which Herrera noted had taken into consideration the traditional territorial fishing rights enjoyed by many Caye Caulker fishermen around the island, and that many tour guides also use the site for fly-fishing and picnicking. But he suggested that it would be a win-win situation, as he hoped many Caye Caulker residents would seek employment with the project, as the group is an equal opportunity employer. He said the project promised to bring many economic benefits to the area, and to the country, as a new market for goods and services. This should increase the revenues of the local restaurants and bars, as well as handicraft vendors, tour guides, and fishermen who will be able to sell their catch to the resort’s kitchens. 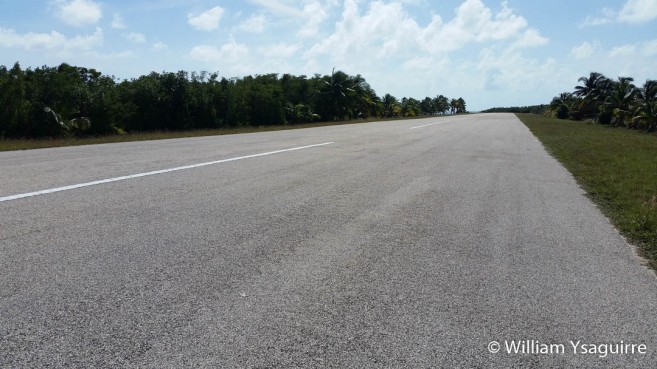 One major concern raised was the amount of dredging which would be required to extend the airstrip, which is presently 1,000 meters (1km) long. The developers want to lengthen the runway to accommodate small jet aircraft, and this will require lengthening the runway by another 1,600m (1 mile) south. This did not sit well with two Caye Caulker fishermen who expressed their reservations about how silt from the dredging would impact their catch, saying they had fished the seas around the island for years, and this is where they set their lobster pots. They argued that they each presently harvest as much as 1,000 pounds of lobster per year from the area, of which they sell 1,000 lbs. to the Northern Fishermen’s Cooperative and another 1,000 lbs. to local restaurants at a US$20,000 value. They gloomily predicted that their production would drop significantly when the dredging starts, as this had been their experience with the previous development on the island; even though that developer had used a silt curtain to retard sedimentation. 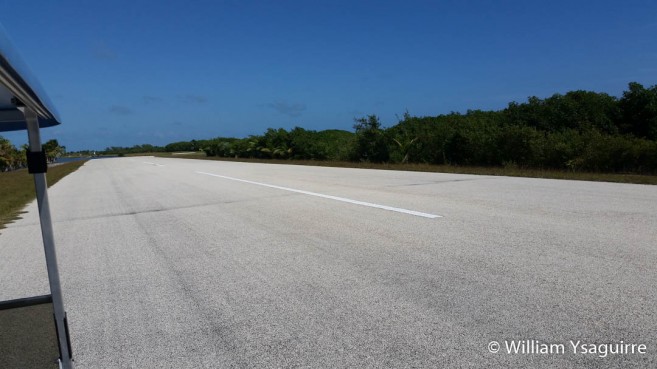 Dionne Chamberlain, the public relations consultant for the project, responded that the precise site, from which the project would mine landfill, had not yet been determined, but that they would welcome the fishermen’s input, and that they would be allowed to visit the proposed dredging site. She promised they would also test the turbidity of the water, which would be monitored when dredging commenced so as not to negatively impact the water quality of surrounding waters. She added that the type of dredge used would also minimize the impact on the sea floor, as they would not be using a bucket dredge, but a suction-type dredge, and they really could not compare to previous dredging operations in the area, since that previous operator did not use silt curtains while dredging.

She also countered that the jobs provided by the project would offer alternative livelihoods to help reduce the local community’s dependence on fishing and to help them use the area’s natural resources in a more sustainable manner.
Chamberlain also introduced the project group’s principals who were at the meeting: project manager Kenneth Retana – representing ThorUrbana, the company building the project, Gerardo Pietrobelli – the project design architect, Katia Montenegro Hoare – the local translator for that evening’s consultation, and Enrique Alvarez, the developers’ representative.

Herrera quite unabashedly listed the major concerns. The project expects to build as many as 33 bungalows or guest villas over the water – of major concern for environmentalists, due to the possible damage to the seabed and obstruction of water traffic. Conservationists have also expressed concern about how the development may disturb the local manatees and turtle population, and how pesticides and fertilizers used on the nine-hole golf course may leach into the groundwater and out to sea.
The project has enlisted the services of two well-known pro golfers – Lorena Ochoa and Greg Norman, to promote the resort’s golf course, which Herrera said had been built on an environmentally friendly design, using a hardy species of grass which can thrive with minimal water irrigation, so as to minimize water consumption, using environmentally friendly pesticides and fertilizers, to reduce runoff to offshore waters and to reduce sediment runoff. 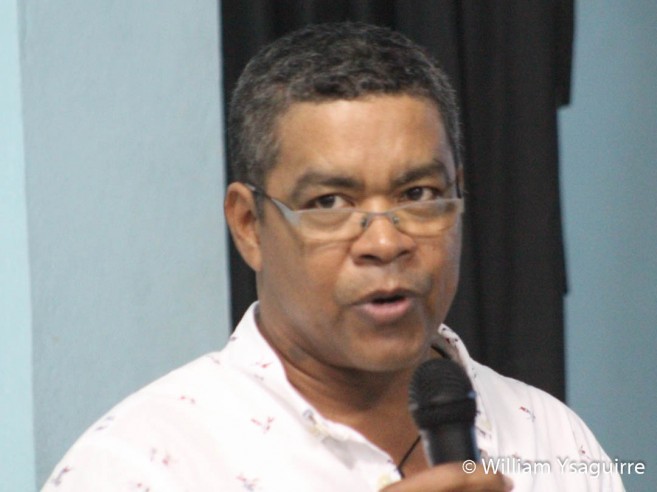 Erosion of the beaches was another concern for both conservationists and the developers; as mangroves have been Mother Nature’s coastal protection solution for centuries before the arrival of Europeans in the New World, but they would like to have sandy beaches for their guests. Concrete sea walls are not only unattractive, they don’t work, as many storm events have shown, and other developers in Caye Caulker have learned from experience. Chamberlain said they have been replanting mangroves in some areas to secure the shoreline, but it is a compromise, as the guests will want a beach. 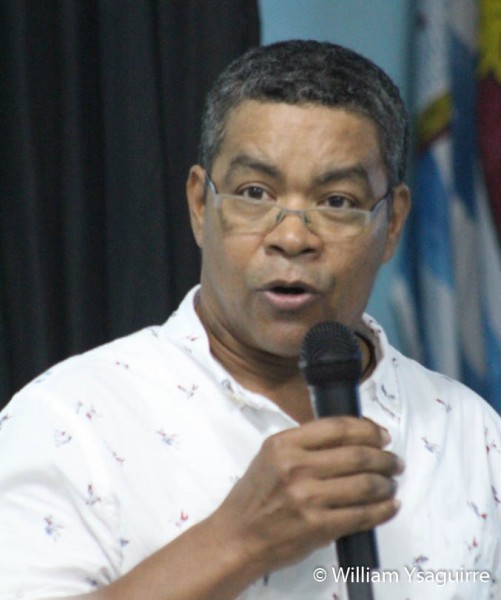 Herrera said the resort will seek to install state of the art solid and liquid waste management systems and energy systems to meet international standards for ISO ‘green certification’. This means that much of the organic solid waste generated would be incinerated, possibly converting the heat to energy through a power plant. This will mean phasing out or replacing the island’s present diesel generators, as they seek an environmentally friendly solution that complies with 2030 Sustainable Development Goals (SDG’s) on Climate Change. Chamberlain added that the island would be getting an undersea cable link to the Belize Electricity Ltd.’s national power grid. 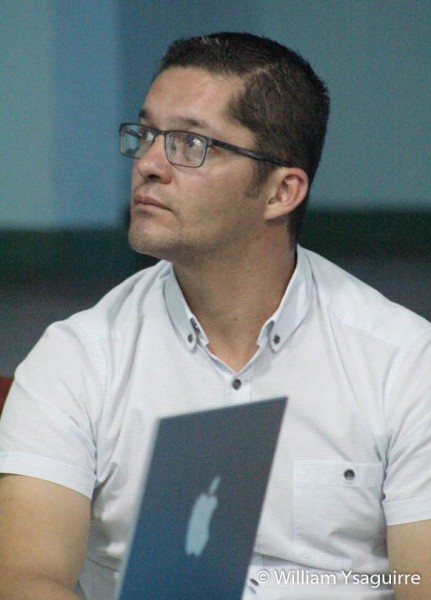 Community response has been very favorable so far, Herrera said, showing a graph of responses to a public survey, with 40% strongly agreeing to the project and another 55% agreeing to project. Only a tiny minority of about two percent disagreed with the development, with three percent expressing no position.
To each possible impact, Herrera explained the project’s mitigation plan, including hurricane preparedness, fuel spill contingency plan, medical emergency response, and their fire prevention and response plan. 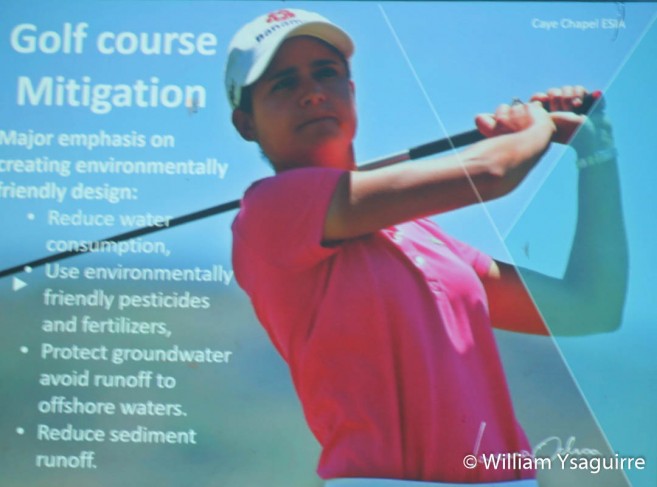 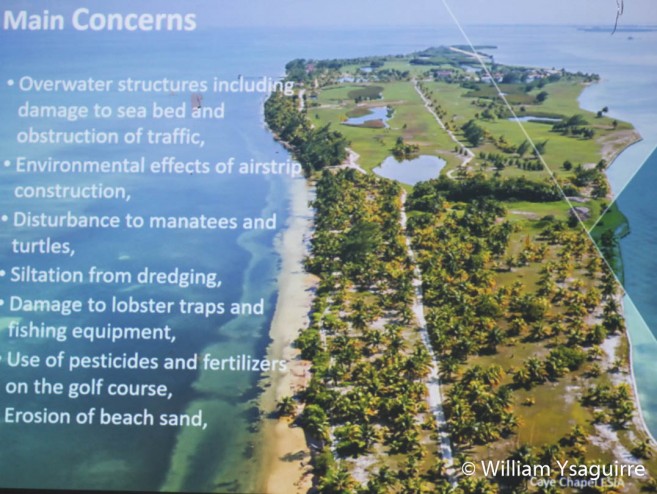 A further visit to the island revealed the luxury of the fittings on the existing guest accommodations, with a huge state of the art kitchen, walk-in freezers, and many other amenities where no cost had been spared. Unfortunately, the existing structures do not fit in with the architect’s grand design and will be torn down. The site manager said he hoped to recycle and reuse much of the interior fittings. Presently the buildings are being used to house the staff and demolition crew.