« Older: Sargassum study around Caye Caulker encourages further human intervention to address this environmental issue
Newer: » Stagnation of the New River: What is Being Done and the Prospect for Improvement


Many island residents are concerned about the clearing of mangroves that is happening south of San Pedro Town as it plays a negative impact on the environment and the tourism industry. The area is west of the Mosquito Coast area, near the WASA Lagoon, and the mangrove clearing is being conducted because it is intended to be a new sub-division. Not only are residents concerned about the wildlife being dispersed in the area but are also concerned with the health hazards that come with the illegal dumping of trash as landfill that can affect the environment and people living nearby. 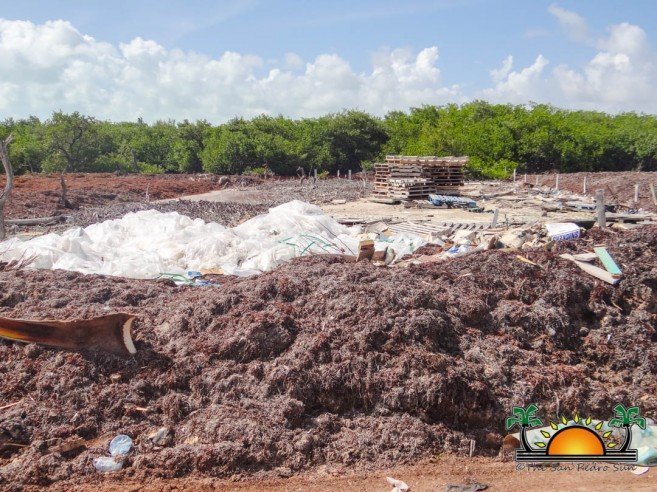 Area Representative and Minister and Tourism and Civil Aviation Honorable Manuel Heredia Jr. stated that the reason for mangrove clearing is to make space for more residences. According to him, the choice had to be made to accommodate more people. He further alleges that he is not using garbage and claims that clearance permits are not required because he only removed a small amount of mangrove. “There are 22 lots that, over there. San Pedro is growing and there is not much solid land anymore on the island, so we have to make use of whatever is available that is best suited for residential that we can find today. These are 22 lots that were issued over there. Yes, sargassum is in the abundance through-out the coast of Belize and that is being used as fill to try to build it up to a certain height. After that they will probably put sand or white marl or other materials to make it more livable. So, yes, that part I can tell you because it was an initiative for myself, together with the permission of the government, to issue these 22 lots over there. The first seven that were issued, with the sargassum and you, will see shortly that it will be filled with a cap of white lime or marl,” he said. Minister Heredia shared that the mangrove clearing that he is conducting will not have a negative effect on the environment. “Well, you know, for a small subdivision like that, I do not consider, as a past fisherman and a person who has sponsored and worked with a lot of reserves in San Pedro, I don’t consider that massive or anything. , lots is not a huge amount over there. So, whenever you will do massive things, then that is when you will do an EIA or when you will do huge projects like hotels, then there is a need for these types of things. But for something small to be able to assist your poor residents and people like that, there has to be some kind of flexibility. If we are going to do massive, then we will need it. But, again, in life, life is real, they say. As a country grows; as a community grows, there is a need for expansion. Rent in the islands is expensive, so we must try and accommodate our residents in low-income residential lots. There has to be balance in everything, so we have to sacrifice a little for your people.” He further alleged that they are two projects happening in the same area, the government one run by him and a private one, which he doesn’t know if the developer has done mangrove clearance (Excerpted from Channel5Belize.com). 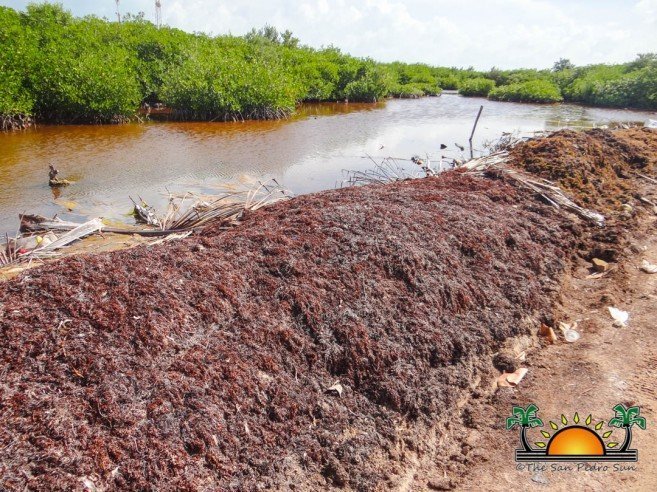 Despite the environmental value that these ecosystems provide, mangrove forests are continuing to be destroyed and degraded as a result of land-use change, exploitation, coastal development, and climate change. According to Global Mangrove Alliance Organization, at this rate, mangroves may all but functionally disappear by the year 2100 unless we take action now to protect and restore them. Mangrove trees are found in the intertidal zone of coastlines, or that area between the coastal environment and the terrestrial environment. These florae are well-adapted to living in saline (salty) and brackish environments, which is one of the reasons that they are so unique. There are about 70 species of mangroves found along tropical and subtropical coastlines. Mangroves are essential and important to our environment because they are equipped with impressive filtration systems that allow them to filter out or exclude salt altogether, despite their twice-daily inundation by saltwater due to changing tides. Perhaps their most notable feature, mangroves have complex root systems that extend above and below the waterline. These roots allow mangroves to stabilize themselves and prevent erosion to the coastline, and also provide habitat, nurseries, and feeding grounds for a vast array of fish and other organisms.
Here on Ambergris Caye, mangroves also play an essential role as they serve as a nursery ground for many species of juvenile fish and commercially important species who later locate to the ocean or the Barrier Reef. With the World’s Second Largest Barrier Reef located in front of San Pedro, it is important to protect and preserve it; therefore, mangrove trees maintain water quality and clarity, while filtering pollutants and trapping sediments originating from land that might have ended up in the reef. They further protect the island’s shorelines from storms, hurricane winds, waves, and floods.
The San Pedro Sun reached out to environmentalists, marine biologists and island residents about their concerns on the mangrove clearing occurring on the south side of Ambergris Caye. American Crocodile Education Sanctuary Field Biologist Chris Summers shared that mangroves, like any wetland habitat, are crucial to the environment. As well as providing home and shelter to numerous species of native wildlife, wetlands all over the planet provide filtration for the water, preventing toxins from entering the water and creating an imbalance. “This is particularly important with the mangrove on Ambergris Caye given how close we are to the reef and how as a community we’re struggling with garbage and pollution. Without the mangrove, unfiltered toxins could be devastating to the reef, and a dead reef will absolutely destroy the economy and livelihood of everyone on Ambergris. The mangrove and reef ecosystems are intricately linked, and we wouldn’t have one without the other. 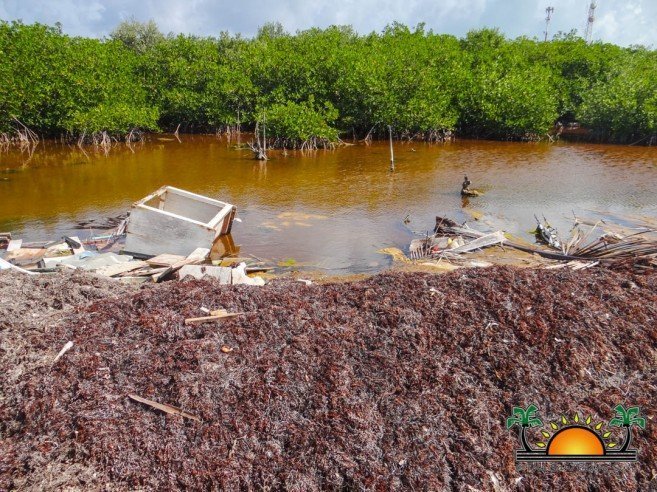 Mangroves provide nesting ground for birds, hunting ground for predators, and just as important, a nursery for countless species of fish, including many found at the reef. According to the World Wildlife Foundation, a recent study on the Meso-American reef showed that there was up to 25 times more fish of certain species in areas close to mangroves than in areas where mangrove had been cut down. This makes mangrove vitally important to the health of the reef, tourism, and commercial fishing,” he said. Summer’s further added that mangrove also helps in filtering the air as they can remove up to five times more carbon from the atmosphere than a similar-sized terrestrial forest. “Seeing as how the Amazon Forest is burning, which is generally considered the lungs of the planet, we need all the help mangrove forests can provide. The coastal protection mangrove offers cannot be overlooked. The dense root systems trap sediments, holding the sand and soil together, preventing erosion in the long term. In the short term, the same root system offers a buffer fighting flooding, dispersing wave energy and tidal forces during storms and hurricanes, and preventing sediments being dispersed by turbulent waters that might otherwise suffocate the reef and seagrass. In areas where mangrove have been cleared, hurricane damage is more severe without the protection they offer. In 2005, New Orleans suffered greatly at the hands of Katrina after the levees they relied on for protection failed and as such, research into restoring mangrove all over the southern states is being conducted. Louisiana has even experimented with using crop dusters and spreading thousands of seeds from the air to rebuild and protect their wetlands before it’s too late. With the intensity of storms predicted to increase, we need the protection of the mangrove now more than ever,” said Summers. 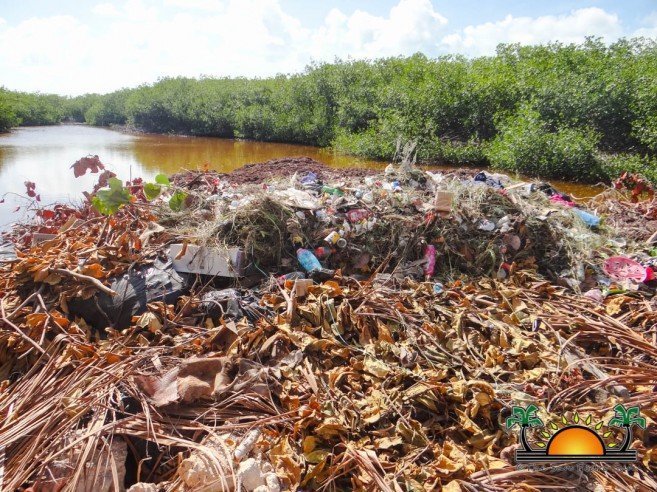 The San Pedro Sun also reached to well-known Biologist Valentine Rosado who commented that massive mangroves clearing is happening across the island, not only at the area in question, and everyone seems to turn a blind eye. “I fear that we begin to accept bad development as a normal thing. After they clear the mangroves and alter the land, we enjoy their amenities and help to label their developments as eco-friendly,” he said. An island tour guide also commented on the situation and stated that they are many other areas on the island that do not have mangrove that could have been used for a new sub-division. “Why clear an area that is full of mangrove to make into a new sub-division when we all know the importance of those ecosystems in our island. They are many parts on the island that don’t have mangroves that could have been used to make the new sub-division. As times goes by, we see more and more unsustainable development being covered with excuses,” said an island tour guide.
Despite the crucial role mangrove play in our society and Ambergris Caye, the clearing south of the island is expected to continue until they have enough space for 22 lots.