The Mesoamerican Barrier Reef System (MBRS) is of inestimable value to the Belize tourist industry and a healthy reef is vital to the Belize economy, so the recent report that the overall health of the reef has deteriorated 18% in the two year period 2016 to 2018 is major cause for concern to both the tourism and fisheries sector. Experts agree that an increase in Marine Protected Areas (MPAs) and introducing another herbivorous species, the Caribbean King Crab, can further control the growth of algae.
Belize’s section of the reef was the only part that showed a 7% with its Reef Health Index (RHI) increasing from 2.8 to 3.0, according to the 2020 MBRS reef health report presented by Healthy Reefs for Healthy People Initiative (HRI). HRI director Melanie Mcfield, Ph.D., is a marine scientist with the Smithsonian Institution, and she presented their findings at the Best Western Biltmore Plaza Hotel in Belize City last Thursday morning, February 13th  Elsewhere in Mexico, Guatemala and Honduras which share the MBRS, reef health had declined so that the overall reef health index for all four countries fell from 2.8 in 2016, to 2.5 in 2018, an 18% drop. 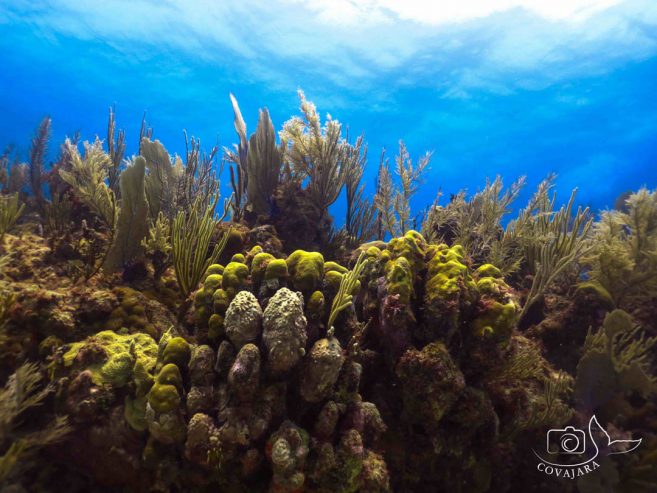 Fisheries administrator Beverly Wade attributes Belize’s improvement in reef health to sustainable management of fishing practices, such as the managed access to fishing areas policy introduced in 2016, and implemented in partnership with Belize’s almost 4,000 fisherfolk. After the first Healthy Reefs Report Card was presented in 2008, the Government of Belize passed key laws to protect herbivorous species in 2009, such Belize’s unprecedented and complete ban on fishing parrotfish. The reef health has benefited from parrotfish grazing on the reef and controlling the growth of algae, which might otherwise smother the coral polyps. As a consequence, Belize now has the highest herbivorous fish biomass in the region (2,744 g/100m2), and Lighthouse Reef Atoll has the lowest fleshy macroalgal cover (11%) in the MBRS. 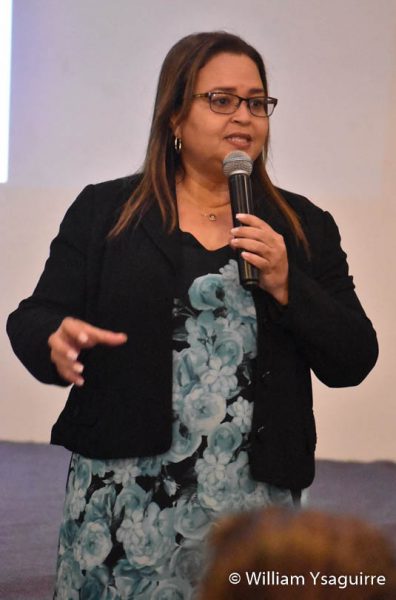 Wade proposes to assist Belizean reef health even further by the introduction of another herbivorous species, the Caribbean King Crab. This innovative project is still in its pilot phase, but the objective is for Belize to develop a healthy population of a valuable commercial species, the Caribbean King Crab, which will also help to keep the reef clean of algae. Nicole Craig, Belize’s Country Coordinator for Healthy Reefs for Healthy People, said: “The project also has the potential to engage fishermen in reef stewardship as well as diversifying their income.” 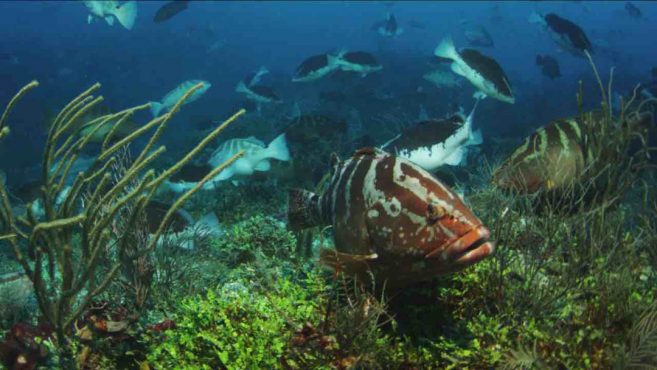 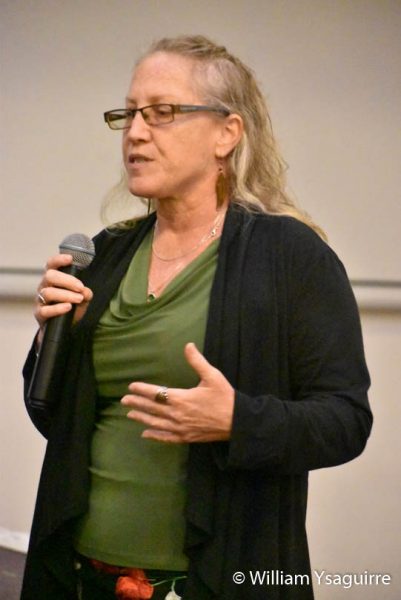 Lisa Carne of the Fragments of Hope coral restoration project in Placencia also reported on her success in replanting climate-resilient species of elkhorn and staghorn coral, which have shown an 85% survival rate over the last decade. Marine science director Leandra Cho-Ricketts Ph.D. at the Environmental Research Institute at the University of Belize also reported on spawning aggregations and how it affects fish populations. 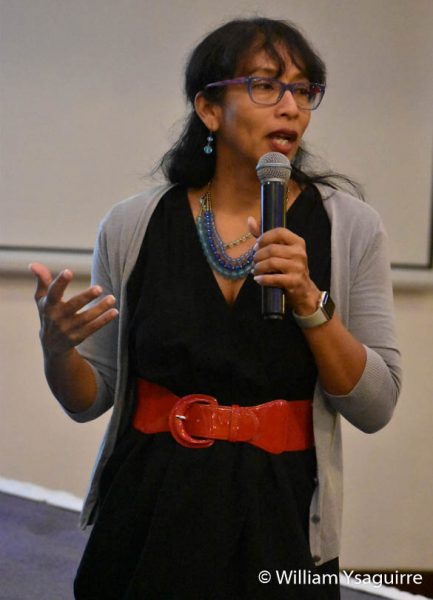 Marine Scientist Nadia Bood of the World Wildlife Fund reported on how coastal development and clearing of mangroves are affecting fish populations and the marine environment.
Outside Belize, the news is not good, as the HRI reports the overall health of this vital ecosystem has deteriorated, for the first time in the 12 years they have been tracking the health of this important barrier reef, since 2008. The only good news is that despite this recent decline, MBRS reef health is still better than it was in 2006 when the HRI first began monitoring the reef. Australia’s Great Barrier Reef has also suffered a dramatic decline in reef health, according to a report released last summer. These indicators are worrisome, in that these are the world’s two largest and most important reef systems, though in different hemispheres, and the outlook is not good. Both reefs are under threat from disease, and the many changing conditions brought by Climate change: warmer oceans, rising sea levels, and ocean acidification. 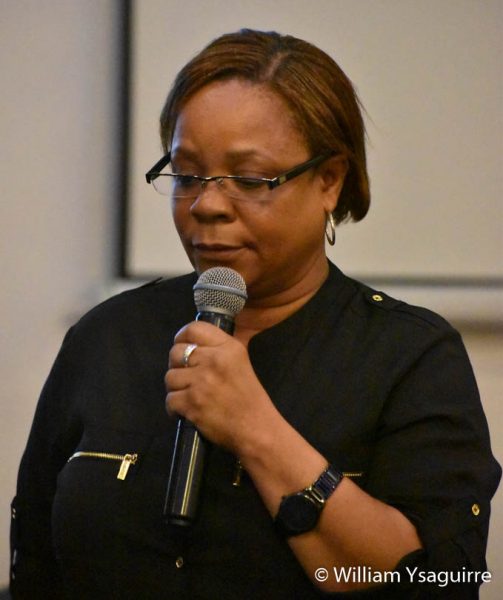 McField said the MBRS has been slowly recovering over the past decade, “but this recent decline highlights the need to step up local actions to improve water quality and increase fish populations and accelerate international commitments to reduce carbon emissions and halt climate change impacts on reefs.” 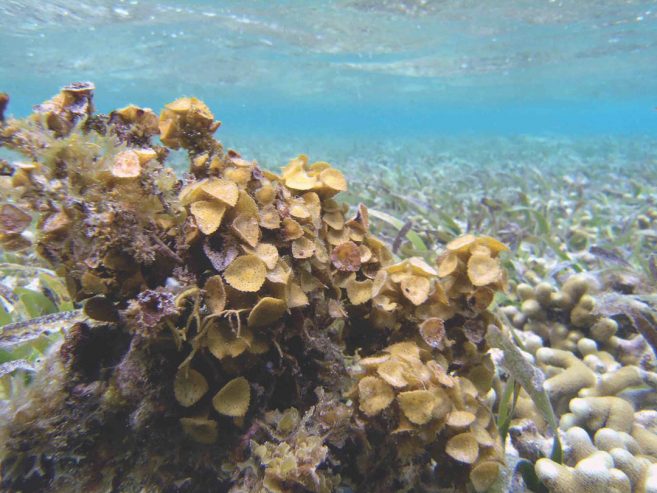 The HRI report is based on evidence collected at 286 coral reef sites, which the Initiative monitors along 625 miles of Caribbean coastline of Belize, Guatemala, Honduras, and Mexico. The fishing ban to protect parrotfish and the recovery of the population of this species was a key factor in the recovery of some reefs. Encouraged by Belize’s success, the other countries followed Belize’s example and today parrotfish are now protected throughout the region including Quintana Roo, Mexico, Belize, Guatemala, and the Bay Islands of Honduras. 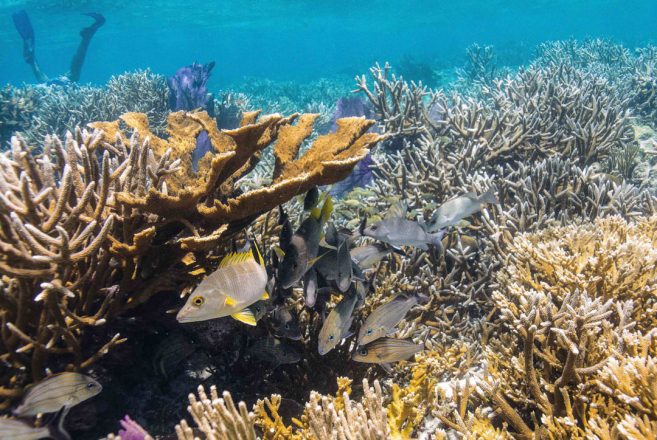 But there are other problems, as the tiny coral polyps which build the reef are now threatened by a new lethal disease, the stony coral tissue loss disease. Florida has already suffered a devastating loss of corals to this new coral disease, and the latest outbreak has migrated south along the 450 km of reefs along the Mexican-Caribbean coast in 2018 and reached Belize’s northernmost reefs last summer.

The disease has not migrated further south yet, but little is known about the cause of the disease. Researchers believe bacterial pathogen may play a role, and our neighbors have partnered to treat the corals to slow the spread of the disease. They are examing new ways to rescue corals, and developing plans to increase their efforts at coral restoration. 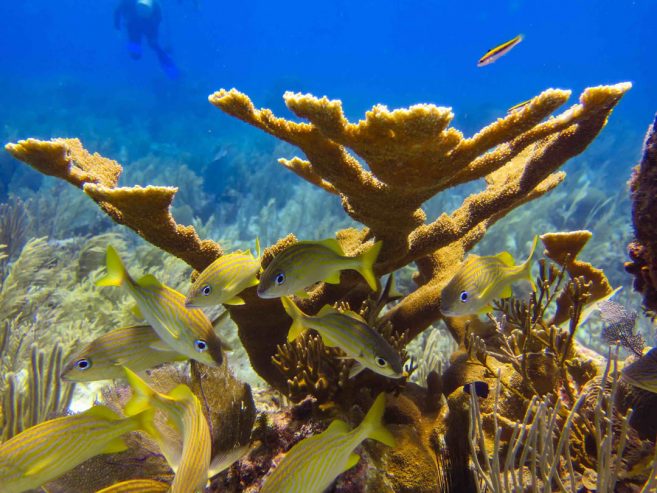 Belize built its first sewage treatment plant on San Pedro as part of a $25 Million project in 1995, and improving sewage treatment is a key part of the solution. Urban wastewaters contain disease-causing micro-organisms and other pollutants, which can both cause disease and encourage the growth of algae, which would reduce coral growth, recruitment, and survival.
“We are at an environmental emergency level where wastewater treatment must be a matter of national security, especially in regions where the only source of freshwater comes from the aquifer and discharges into our Mesoamerican Reef System,” said Alejandro López Tamayo, Director at Centinelas del Agua. “Wastewater treatment becomes an international emergency to save the Meso-American Reef and to achieve Sustainable Development Goal 6 by 2030.” 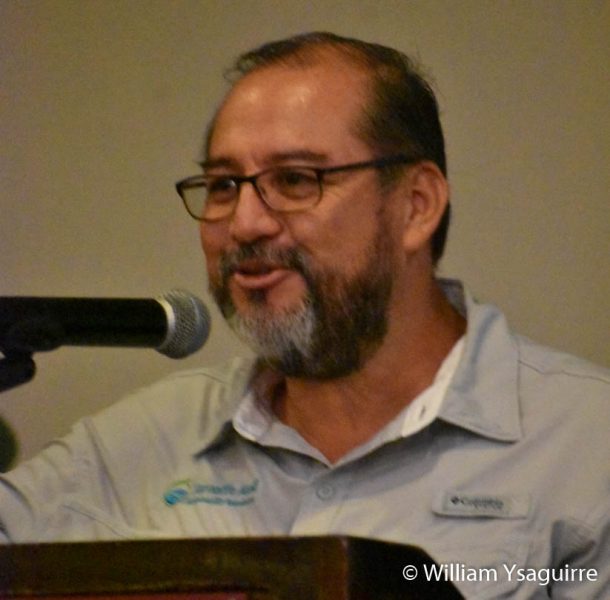 Unsustainable fishing practices among our three neighbors, particularly overfishing in Honduras, has sharply reduced the fish populations for both commercial and herbivorous fish and is largely responsible for the decline in reef health. In Honduras, the RHI went from 3.0 to 2.5. The fully protected areas in these countries are not enough, and their present fishing regulations are not adequately enforced. 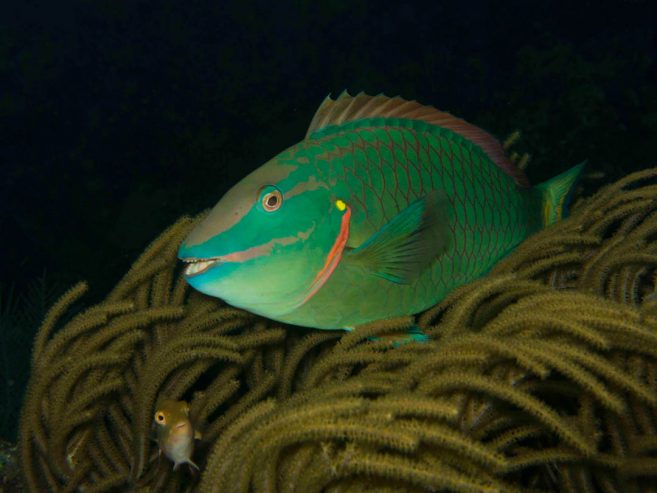 It’s both a social and ecological crisis,” says said Jenny Myton, Associate Program Director at the Coral Reef Alliance. Overfishing has so depleted fish stocks in Honduran waters that will greatly impact the income of millions of Hondurans, increasing their poverty, which may cause them to migrate to other countries. “There has always been a struggle to manage fisheries in Honduras, and the results of this 2020 Report Card are a call to urgent action!”
Our neighbors agree on one thing, that the solution may be to follow Belize’s example and increase the amount of fully protected areas. More than half the area of the Reef lies within Marine Protected Areas; however, only 3% is fully protected from fishing. The last reef health report in 2018 showed that fully protected replenishment zones had doubled the commercial fish population in the last 10 years. 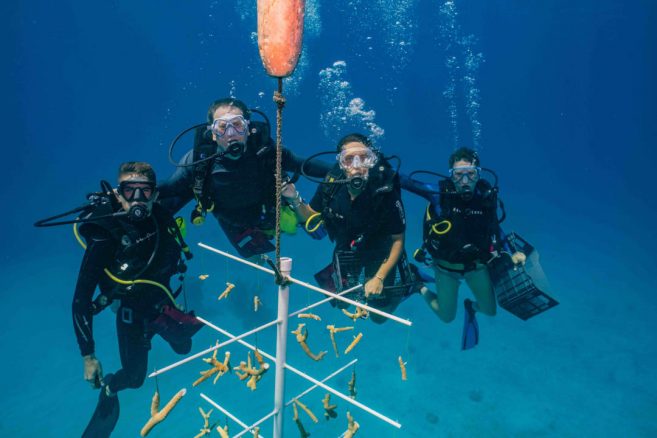 This year’s report also reflects this trend, as the several coral reefs in Cozumel and southern Belize which have abundant fish populations also have effective fisheries management. The fully protected areas need to be expanded to include fish spawning sites, and fishing regulations must be more rigidly enforced if our neighbors hope to rebuild their fish populations.