Home » Government » H.E. Alexis Rosado Presents Credentials to the President of the Republic of Costa Rica

H.E. Alexis Rosado Presents Credentials to the President of the Republic of Costa Rica


Belmopan. July 9, 2015. The Ministry of Foreign Affairs is pleased to announce that his Excellency Luis Guillermo Solis Rivera, President of the Republic of Costa Rica, received H.E. Alexis Rosado in a solemn ceremony on Wednesday, 8th July 2015, on the occasion of the presentation of credentials accrediting Mr. Rosado as Belize’s Ambassador Extraordinary and Plenipotentiary to the Republic of Costa Rica. 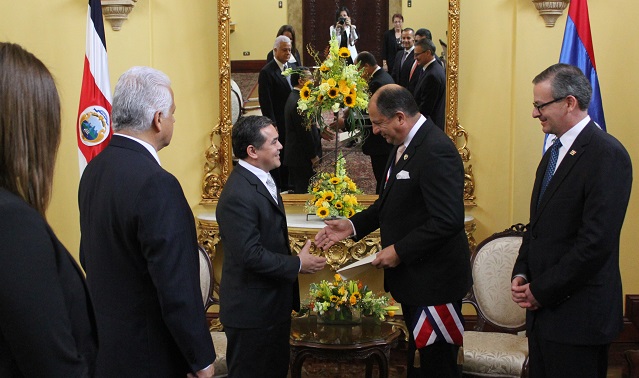 Belize and Costa Rica have enjoyed relations of friendship and cooperation since Belize became an independent country. Both countries have a tradition of peace, democracy, and the respect for human rights and the rule of law. There are several agreements in the areas of trade and cooperation that we now must activate. Both countries are members of the Central American Integration Process (SICA) and the Association of Caribbean States (ACS) which allows us to engage in dialogue and functional cooperation with other sister countries in the region. Costa Rica and Belize have equally given priority to international concerns regarding climate change, deforestation and to the inadequacy of graduating middle income countries through standard international measurements.

During his visit Ambassador Rosado paid a courtesy call on the Foreign Minister H.E. Manuel Gonzalez Sanz. He also made arrangements for the opening of a new Consulate of Belize in Costa Rica. Mr. Rosado will serve as non-resident Ambassador.