Amidst the impending referendum to determine whether the Belize- Guatemala territorial dispute should be settled once and for all by the International Court of Justice (ICJ), turmoil between both nations continues to grow. With several recent issues, including the grounding of a Guatemalan vessel and an altercation between Guatemala’s Navy and Belize Coast Guard (BCG) personnel, both in Belizean waters, Guatemala continues to assert its claim over Belize and threaten the sovereignty of the nation. The most recent issue involves the construction of the BCG’s Forward Operating Base (FOB) on Sarstoon Island which the Guatemalan Government is now opposing. 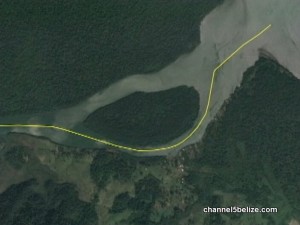 According to reports, the Guatemalan Government does not want the base to be constructed until the territorial dispute is settled. The construction of the FOB in Sartstoon Island had already been delayed for several years, but the Government of Belize (GOB) had taken steps to start the project this year in order to maintain territorial integrity and security in an area so close to Guatemala. But, Guatemalans do not want this to happen and as such have made several attempts to assert their claim in the area. These attempts include the incident of Thursday, May 28th when Guatemala officials demanded BCG to move from an area they were working on in the Sarstoon Area.
Minister of Foreign Affairs, Honorable Wilfred Elrington has indicated that GOB is in communication with Guatemalan authorities discussing as to why the construction of FOB is an issue. “Whenever we want to do anything that touches on the border, we communicate with them and we get their views on it. Depending on the views that they expressed and how strongly we feel about it, we take those actions which we deemed are in our best interest. When we told them about the base, they suggested we discuss the matter at the Organization of American States (OAS). We certainly have intentions of doing it before we take any further steps with respect to the matter, given the fact that we are on our way to the ICJ,” said Elrington.
Elrington went on to state that GOB will make a final decision on the construction of the FOB after consulting with OAS. “We don’t take any decision that is not in the best interest of the country, both at the National Security Council and at the Cabinet level. We make the determination that we think are in the best interest of Belize, security, integrity and sovereignty. I can’t explain the attitude and the position taken by the Guatemalans. I know very forcefully and clearly what is our position. We must do what is in our best interest. Guatemalans are making an issue with respect to it, because they are claiming the entire territory. This is not unusual and it is not unusual in relation to border matters. It’s a kind of push and pull whenever there is a border dispute,” said Elrington. The main purpose for the base would be to act as a bumper for illegal fishing and logging in the area which is, again, caused by Guatemalan intrusion.
But Chief Executive Officer of the Ministry of National Security, Retired Colonel George Lovell believes that GOB should be the one to have the ultimate decision on the construction, as they are not obligated to consult with Guatemala over development plans. “We had informed the Guatemalans that we had plans of having a temporary facility placed on the mouth of the Sarstoon and that we had intentions of frequenting the area. We wanted to be clear whenever we go into that area because of the sensitivity of the dispute. At no point were we asking them permission or approval for what we do, but we do it simply because there is a diplomatic process and we wouldn’t want to do anything from a military standpoint to put that in jeopardy. We believe that the place where we want to place our temporary FOB, which is primarily for law enforcement purposes- we want to ensure that we keep our border safe, our people who operate in that border safe- is something that we do not need to go to any country and get permission from in order to do so. And what our BCG and GOB has planned on doing is clearly in line with us maintaining sovereignty and maintaining law and order. We are having problems in the past in that and so we are trying to ensure that we carry out with the mandate that our security forces have and the Ministry of National Security has,” said Lovell. He also indicated that Sarstoon Island is not in the Adjacency Zone and therefore Guatemala has no right to oppose to the construction of the FOB (the Adjacency Zone is an area spanning one kilometer on either side of the western border between Belize and Guatemala, administered by the OAS, which acts as a broker between the two countries in respect of a territorial dispute).
Until the discussion with OAS occurs, the construction for the FOB is on hold and BCG will have to continue patrolling the area as usual.

Approved Flights to Belize in July

URGENT: Ministry of Health cautions the Public on Dengue Outbreaks in the Region