Tensions between Belize and Guatemala are at an all-time high and the territorial dispute continues to cause issues. The most recent and widely disputed issue is that of Sarstoon Island, which Guatemala openly claims and even has military personnel patrolling. But Belize remains adamant that the island forms part of the country of Belize, and that Guatemala has no claim over any Belizean land.
In the most recent controversy, the Government of Guatemala opposed to the construction of the Belize Coast Guard Forward Operating Base (FOB) on Sarstoon Island. This issue had escalated to an altercation between Guatemala’s Navy and Belize Coast Guard (BCG) personnel, who were working in the Sarstoon Area. 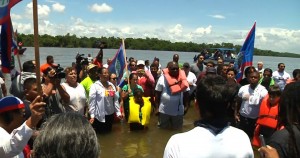 As a result of this growing issue, the Belize Territorial Volunteers (BTV) led an expedition to Sarstoon Island on Sunday, August 16th, where Belizeans had a patriotic day. The aim of the expedition was to assert the sovereignty of the nation and demonstrate that Sarstoon Island is in fact, Belizean territory. But the expedition faced disapproval from both the Government of Belize (GOB) and Guatemala. GOB denounced the expedition and did not provide any form of security escort. In a press release sent out before the expedition set off, GOB stated, “The Government takes the opportunity to caution and reiterate its position that has been expressed to the Belize Territorial Volunteers that it is imprudent and potentially dangerous for the organizers of this type of excursion to expose innocent Belizeans to the risk of inadvertently entering into Guatemala territory.”
Even without the support of GOB, the trip went on, and upon reaching the Sarstoon Island, the 130 participants were accosted by Guatemalan Military, claiming they were trespassing and demanded that they evacuate the area. Nevertheless, BTV carried out their itinerary, raising the Belizean flag in Sarstoon and singing the National Anthem. Among the attendees was Senator Lisa Shoman and a vessel with Organization of American States (OAS) observers. 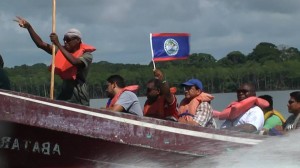 Three days after the excursion, Prime Minister of Belize Dean Barrow addressed the public on the BTV actions during a press conference on Wednesday, August 19th. He stated that while he believes the BTV sentiments were commendable, their actions were uncalled for. “Now I want to make clear that I perfectly understand and indeed applaud the sentiment that motivated the Territorial Volunteers. Their decision arose from feelings of patriotism that are not just commendable but inspirational. Nevertheless, theirs was an incomplete grasp of the facts (a situation for which Government is perhaps at least partly to blame). As a result their actions, though well-intended, were wrong. For it cannot be right to insert any Belizean, especially children, into a situation so fraught with danger. Danger arising both from the presence of the Guatemalan Navy and other conditions, including overcrowded expedition boats,” said Barrow.
Barrow indicated to the people that the GOB action of not supporting the BTV was not due to Guatemala’s intimidation, but because they do not believe the already sensitive situation should be further provoked. He then reassured that Belize is not making exceptions for Guatemala, and that at no point is GOB relinquishing any land to them, especially Sarstoon Island. “Every Tuesday the Belize Defense Force takes a replacement contingent of soldiers to our side of the Sarstoon River to our military outpost at Cadenas, and brings back down the River the troops being rotated out from Cadenas. In doing this, and consistent with our assertion of sovereignty, we ask neither leave nor license from the Guatemalans. Indeed our BDF are routinely challenged by the Guatemalans and frequently told to turn back. Our soldiers never retreat and are never deterred by these standoffs. They always complete their mission, even when they are threatened by the Guatemalan Navy with the ramming of their boat and/or a firefight. So the fact is that our security forces protect and defend our Sarstoon River sovereignty on a continuing basis, operationally demonstrated every Tuesday of every week of every year without fail. But, arising no doubt from a lack of information and a great deal of misunderstanding, the Territorial Volunteers came to the opposite, and patently wrong, conclusion. Then, proceeding from this mistaken premise, they decided to show that they could fill what in reality was a non-existent void; that they should assert a sovereignty that, albeit seemingly unknown to them, was already being asserted by those both charged with, and capable of, doing the job: our Belizean military. That is how, as I see it, last Sunday’s expedition came about,” explained Barrow. 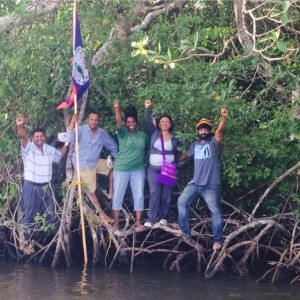 Another issue discussed was the report made by the OAS observers. OAS Chief observed Magdalena Talamas was present for the entire of the expedition in a Belizean boat as things were unfolding. “Four of the Territorial Volunteer boats made it through to the Sarstoon Island, and circled the island. They entered the River by the North Channel and exited by the south channel. At least one other, the bigger boat was prevented by the Guatemalan Navy vessel from attempting to do the same thing. The question that at once arises is whether those four boats that transited the two channels at any point went over into what we consider the Guatemalan side of the river, and whether at any point the Guatemalan Navy came over into our, Belizean side of the river. The OAS reports that even the four small Belizean boats were at first intercepted by the Guatemalans before they were able to proceed towards the island. And both that temporary interception of the small boats and the permanent interception of the bigger boat took place, as I understand Ms. Talamas, at the mouth of the Sarstoon River. It is my belief that what the OAS describes as the mouth of the Sarstoon River, is clearly in Belizean waters, and that the Guatemalan Navy committed an incursion when they intercepted our boats at that spot. The Territorial Volunteers, and the Belizean media, confirm the fact of this incursion, and General Jones and Admiral Borland-after viewing video footage-fully concur. Now whether our four Volunteer boats also went into Guatemala during the course of entering, circling and exiting the area of the island, must remain unanswered for now. The Volunteers say no, and the OAS doesn’t say yes. But regardless of what may later be established on that score, the Guatemalan incursion certainly happened first. And any unwitting Belizean entry into Guatemala by unarmed, civilian boats is of a different order completely from the deliberate violation committed against us by a presumably well- armed Guatemalan Navy. An extremely strong protest note has therefore been prepared by our Ministry of Foreign Affairs, and was approved just now by National Security Council for immediate dispatch to the Guatemalan Foreign Ministry with a copy to the OAS,” stated Barrow.

PM Barrow stated that while all Belizeans are free to travel anywhere within Belizean territory, it is recommended for safety reasons to stay away from heavily disputed areas. “Your courage and patriotism were on display for all of Belize and the world to see. And no one was hurt. Let that be enough now and for the sake of all, but especially the children, do not let us tempt fate a second time,” ended Barrow. BTV did not take Barrow’s recommendation, as they carried out another smaller excursion to Sarstoon Island on Tuesday, August 25th.
While the GOB hopes to calm the tension through diplomatic means, the people of both countries remain heated about the course of the territorial dispute. The tension has even reached Melchor de Mencos, Guatemala, a common shopping area for Belizeans. Reports are that a Belizean family was attacked by several Guatemalan men while visiting the area on Sunday, August 23rd. The incident occurred after one of the men allegedly touched a 12-year-old girl from the group inappropriately. The family is now asking Belizeans to boycott Melchor de Mencos due to their hostility toward Belizeans.
GOB hopes the tension between both countries will be solved through a referendum to decide whether the territorial dispute should be brought before the International Court of Justice (ICJ) for a final decision.