Belize is once again benefiting from the Central America Regional Security Initiative (CARSI). The country has received over $US35 million in programs and grants from the initiative since 2008. On Thursday, April 7th, United States Ambassador to Belize His Excellency Carlos Moreno, and the Right Honorable Prime Minister Dean Barrow, signed the 16th Amendment to the Letter of Agreement implementing the International Narcotics and Law Enforcement Affairs (INL) program.
The signing of the document, which will also provide Belize with $US1.4 million to the ‘Justice Sector Reform,’ took place at the Cabinet Room. This new stream of financial aid, to be disbursed over a period of five years, has the aim to take a holistic approach on the justice system in Belize. 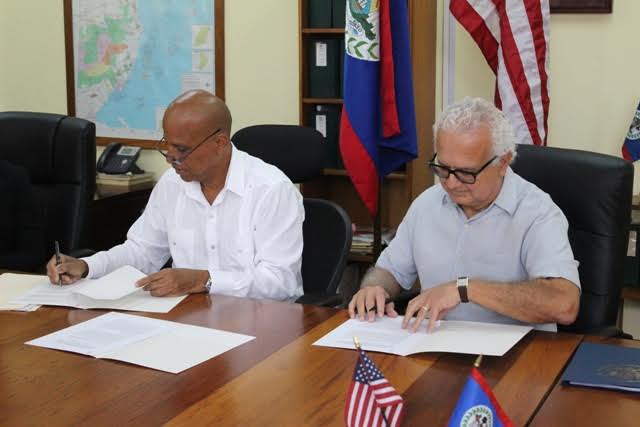 According to Ambassador Moreno, the particular amendment dealing with the Belizean justice sector is designed to enhance the country’s capacity to fairly and effectively investigate, as well as process criminal cases in a timely manner. “We hope that this will build Belize’s capacity to investigate and prosecute illicit drug trafficking, money laundering, corruption and other crime,” said Moreno. “This project will also assist the justice system to review, draft, and implement, as well as enforce new and current legislation and regulations.”
The U.S Government, through the CARSI program, has been providing Belize with financial support on a yearly basis. During 2015, $US6.4 million were made available to Belize through the INL and were targeted for the use of improving border inspection, vetted units, capacity enhancement and community policing. To date, the U.S. Government, through INL, has committed a total of USD $28.4 million since 2008 to these programs in Belize.
At the signing session of the agreement, Prime Minister Barrow welcomed the assistance from the U.S Government and commented on the relationship between Belize and the United States regarding security collaboration. “This is a welcome development. The additional funds and expanded uses to which we have agreed must be put to work, so the program becomes more comprehensive and presumably more efficient as well,” said Barrow.
In addition to INL programs, the U.S. Embassy has also provided over USD $6 million in CARSI Economic Support Fund grants to local and international NGOs operating in Belize. Programs have included entrepreneurship, vocational training and job placement. These also included after school activities, educational assistance, skills training, and arts and culture. Another $1.2 million will be issued as grants again this year on these areas.
In recent years, one of the government departments that has greatly benefited from these programs funded through CARSI is the Belize Police Department (BPD). The impact has been seen nationwide with training and equipment provided to this security body. The BPD has dramatically improved mobility and taken major steps toward modernization, including case management and evidence handling.
The programs have also focused on the concept of community policing, both with the police and local communities.
According to data collected by the INL from local police station, areas with active, U.S.-funded neighborhood watches and community policing programs, have reported decreases in burglaries and other crimes.
The INL, in conjunction with CARSI, will continue to support safer streets and more resilient communities in Belize. The programs will enhance on-going efforts in greater capacity throughout Belize with programs in forensics, prosecution, and the judiciary system.