The news of eight Belizeans detained by the Guatemalan Navy on Thursday, May 26th put Belizean officials at the Embassy of Belize in Guatemala City on high alert. The group of Belizeans were taken to Guatemala City where they were processed for illegal entry by immigration officials. The eight Belizean nationals, all fishermen, have been identified as Jeffery Gongora, Manuel Flores, Antonio Pop, Simeon Batun, Isidro Tamai, Jorge Tamai, Bartolo Jimenez, and Ernesto Meighan.
According to the Guatemalan Navy, they were detained when they were found disembarking from their vessel at the Punta Manabique Beach in the department of Izabal in Guatemalan territory. The report adds that seven of the eight individuals had in their possession Belizean fishing licenses, but no boat registration to navigate in Guatemalan waters. 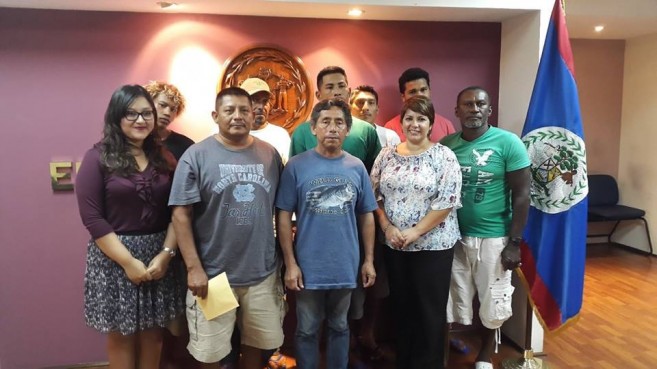 The Ministry of Foreign Affairs confirmed the reports on Friday, May 27th through a press release where it briefly described the chain of events and the condition of the detainees. The Ministry indicated it had been in touch with the group of fishermen and that they were in good health, meanwhile the Government of Belize stated that it would continue engaging with Guatemala and representatives of the Organization of American States (OAS) in regards to the incident.
On Monday, May 30th, the Belize Ministry of Foreign Affairs reported that the group of Belizean fishermen visited the Belize Embassy in Guatemala in order to process their travel documents prior to their deportation back to Belize. It is expected that their transfer back to Belize will be smooth, since in Guatemala the charge of illegal entry in an administrative one which does not require a court process.
Following this event, the Opposition, the People’s United Party (PUP) issued a very strong response demanding the government to re-establish full sovereignty and control over the Belizean internal waters, particularly in the Sarstoon area. PUP representative Senator Eamon Courtenay, who is also part of the Belizean team holding talks with Guatemala, stated that Guatemala is illegally and blatantly exercising control on Belizean territorial waters. “So far as the PUP is concerned, there are two things that need to be addressed as soon as possible. First, there is the need for an urgent and structured approach to this problem by Belize, and I say Belize because I mean by that the government, the opposition and any other relevant social partner,” said Courtenay. “Secondly, it requires our people to understand that this is a matter that is extremely serious and it requires all parties to come together to have a singularity of purpose. This is not time for politics.”
The PUP also made a call for the appointment of a national team to competently manage the issue of Belize and Guatemala. “I think the Belizean people want all the persons who have relevant expertise in this matter, who are prepared and able to join a national effort, to be part of this initiative. Guatemala has claimed the whole country, half of the country and a part of the country at varying times. However, we have never had a situation where they are in fact exercising control and for quite some time now,” said Courtenay.
In the meantime, while the group of Belizeans detained in Guatemala are on their way back to Belize, the PUP insists on the recall of Belize’s Ambassador to Guatemala Alexis Rosado. Guatemala recalled their ambassador to Belize over two weeks ago, in the wake of the shooting death of a Guatemalan minor within Belize territory.