« Older: Presentation of Credentials
Newer: » Fifth Summit of The Heads of State and Government of the Community of Latin America and Caribbean States


On January 18th, the Senate Special Select Committee resumed its Senate hearings on the Immigration Department in Belmopan. Although the newly-elected 13th Senator Osmany Salas did not attend the first hearing, the meeting proceeded with its agenda to investigate the findings of Auditor General Dorothy Bradley’s Special Audit into the Passport, Visa and Nationality Department for 2011-2013. Former Immigration Director, Ruth Meighan, was interrogated by the Senate Select Committee for approving applications for permanent residency, passports, and visa issuance.
When the immigration scandal came to light, Auditor Bradley revealed that a list of 15 foreigners received a passport without meeting the requirements. Meighan was questioned about the passports approved for foreigners. One of the requirements for permanent residency is to reside in Belize for one year, and these foreigners did not meet legal requirements. 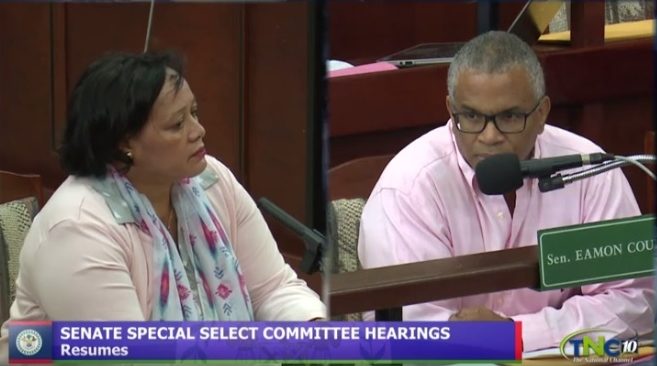 At the beginning of the hearing, Meighan explained that her involvement in passport and visa approvals was very limited. She claimed that when she was approving the applications, she did not see the visas, and believes that the stamp that accompanied the permanent residency application was a forgery. However, she claimed she was not aware that a scheme was taking place.
Senator Aldo Salazar questioned why foreigners were granted permanent residency. “When I was approving the permanent residency, I did not have the visa application or information on the visa in front of me…What I had was a file that is a permanent residency file that indicated to me that the person has been living in Belize for over a year…The application for permanent residency comes in a file that has photocopy records of the applicant, and on that file, the indication from the officer says that the person has been living in Belize for the one year period as specified, and within that you would have the passport of that individual with the stamp of entry and other permits that were issued. Based on that information that is presented, that is what we use to give approval,” said Meighan.
Senator Salazar also questioned Meighan on passport approvals. “There was no point when the passport had to get direct approval from me, as a matter of fact, my involvement with the processing of passports was very limited except, and it’s something that I had met there, where there were requests for emergency passports and the officer in charge thought it necessary for them to refer the person to me, then I would then maybe take some decision on an application for a passport; for emergencies only.
The issue of foreigners obtaining nationality was addressed to Meighan, where she admitted that she made the recommendations. “The process was with an application and a recommendation from the officers that all the set requirements were met, I make recommendation to the minister as the director and the minister approves,” said Meighan.
The Senate Inquiry continued on Wednesday, January 25th. Before in-depth questioning, Senator Eamon Courtenay asked Meighan if she reviewed the Audit for 2011-2013. She stated that she did, but did not go into detail. “I browsed through the report, and I saw some of the findings that relates to work that I have done. Like I said to this committee, whatever I did while I was at the Immigration Department was within my authority. It was also done based on recommendations that was given to me to either make a decision on or not make a decision,” said Meighan.
A list of minister recommendations from United Democratic Party (UDP) officials, including Minister Elvin Penner, Minister Manuel Heredia Jr., Minister Edmond Castro, Minister John Saldivar, Minister Erwin Contreras, were brought up in the Senate hearing. The Senate was revealed that the General Elections in 2012 had a major influence of approving nationalities for those who did not qualify. Senator Courtenay questioned Meighan the reason a minister would write on behalf of individuals they did not know. “My impression was that the minister was writing on behalf of a person that he knows to say that he is supporting somebody from his constituency. The applications were processed and approved by my desk even with the minister’s recommendation based on the information that is presented to me by the officer to say that the person meets the requirements for a visa,” said Meighan. She also admitted that she never verified if the minister knew the people he was recommending.
The hearing also touched base on passport approvals, including a situation where a duplicate copy of Meighan’s signature was saved on the electronic passport system. As an Immigration Director, once a passport was approved, Meighan would have placed her electronic signature on it. However, the Senate revealed that her signature was used to approve passports, even after she left the department.
Meighan testified that the use of her signature was probably used without her knowledge.
“I am not certain, because my understanding from getting there and up to leaving is that, with my signature on the system as the Director, that that is the Director’s approval. So, the processing of the passport can be done without my knowledge, but with my signature on the passport, I believe that it was a genuine approved passport,” said Meighan.
Salazar then questioned her about the culture of irregularity and illegality in the department. “After I browsed through the report and some of the findings that came up, even I as the director didn’t expect that some of the things that happened did happen so I must state that clearly because the expectations were that when the file is presented the information that is presented is accurate, relevant, what we ask for. Obviously I don’t know if changing the people or putting more control or putting a better system in place would make a difference. Obviously the department requires people within the department you can trust with the information they are presenting with, because at the end of the day, what you get is what you make your decision on,” said Meighan.
The next meeting is scheduled for next Wednesday, February 1st, where the Senate intends to call forward all of the senior immigration officers and commanders that were mentioned by Meighan.