Secretary General of the Commonwealth, the Right Honourable Patricia Scotland, reaffirmed the organization’s staunch support of Belize’s sovereignty and territorial integrity during her two-day visit to the country on October 1st and 2nd. The Secretary-General indicated that Belize and the Commonwealth continue to enjoy excellent relations, as the Jewel is very important to the organization. Scotland also spoke of the position of the Commonwealth on the upcoming referendum on whether Belize should head to the International Court of Justice (ICJ) to end the Guatemalan territorial claim. While she did not encourage a yes or no vote, Scotland was clear on the Commonwealth’s point of view that there is no legality in the Guatemalan claim. 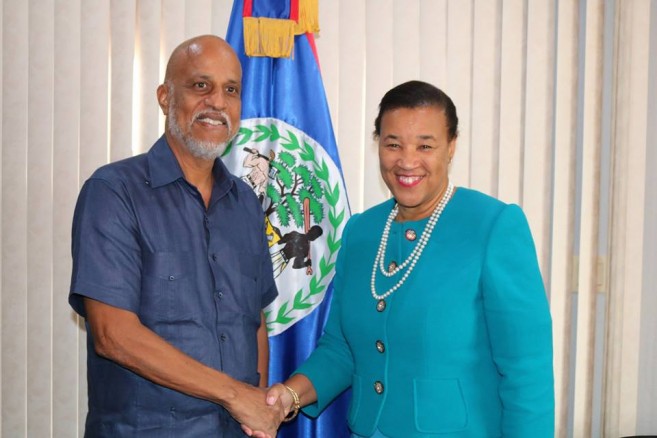 Belize is one of the 53 nations that make up the Commonwealth, which supports the country in preserving its sovereignty and integrity. According to Scotland, the Commonwealth family consists of approximately 2.4 billion people who stand together. In the case of Belize’s territorial issue with Guatemala, she mentioned that the whole Commonwealth family reaffirmed its support to Belize once again during their annual of Heads of Government in April of this year. “Heads expressed their support for Belize’s efforts to implement a Special Agreement and submit Guatemala’s territorial, insular and maritime claims to the ICJ for a final determination,” said Scotland. She added that after looking at the legal structure regarding the Guatemalan claim, the Commonwealth believes that Belize is entitled to the whole of its territory. “We will stand with Belize against anyone who says otherwise,” said Scotland. According to her, this decision is not because Belize is a member of the Commonwealth, but because the body has looked at the situation from the point of view of the international law. She stressed the fact that Guatemala has never exercised any territorial authority over Belize. “It is very clear from the Commonwealth point of view that there is no lawful claim,” she said. “What the United Kingdom and the Commonwealth can do is stand with Belize to say we have a look at the legal position, and Guatemala had no right over Belize before and after 1981 when Belize became independent. You cannot claim you own it; it is not going to happen based on international law.”
The Secretary-General mentioned that the Commonwealth had been urging both countries to bring an end to the ongoing issue to get a final determination. She did not advocate a vote for or against the referendum, as in her opinion that decision is entirely a matter for the Belize electorate. Scotland indicated that the referendum is not about Belize’s integrity, but about what to do with the Guatemalan claim. Scotland questioned that if the ICJ is not used to resolve the issue, then how can the territorial dispute be resolved. She explained that this international arbitration is a guaranteed peaceful way to end with this claim, a legal solution that will see Guatemala never again bringing the topic to the table. However, Scotland reiterated that agreeing to head to the ICJ by voting at the referendum next year in April, is the entire responsibility of the Belizean people.
This marks the second visit of Secretary-General Scotland to Belize in a mission to continue amplifying the voice of small countries at the international level. During past years, the Commonwealth has provided technical assistance and capacity building support in areas such as trade, legislative drafting, public sector policy, and climate change.
During Scotland’s visit to the Jewel, she held meetings with the Governor General Sir Colville Young, Prime Minister Right Honourable Dean Barrow, the Leader of the Opposition, Honourable John Briceño, Minister of Foreign Affairs, Honourable Wilfred Elrignton and other governmental officials. The Referendum Commission and some of the beneficiaries of the Commonwealth Girls Education Fund, a registered charity in England which sponsored capable females in their endeavors, were also honored to meet with her.
Scotland and her delegation left Belize on Wednesday, October 3rd to London, England, where she is based.