The 2019-2020 National Budget was approved by the Senate shortly after 5PM on Thursday, March 28th inside the National Assembly in the Capital City of Belmopan. The proposed $1.25-billion-dollar budget by the ruling United Democratic Party (UDP) was heavily criticized by the Opposition, the People’s United Party (PUP) during its initial debate from Monday, March 25th through the 26th in the House of Representatives. The Opposition pointed out that the government was focusing mainly on infrastructure spending and was short on people-oriented programs. One detail that caught the attention of the Belize Rural South (BRS) constituency, particularly Ambergris Caye, was the minuscule budget designated for the number one tourism destination in the country and top revenue earner.

Islanders were hoping the national budget would include a much-needed hospital, additional schools, and proper road infrastructure. BRS Area Representative and Minister of Tourism and Civil Aviation Honorable Manuel Heredia Jr., delivered a presentation on the second day of the Budget debate, speaking at length about the achievements in his ministry. He claimed an increase in tourism and highlighted the addition of two international airlines (AeroMexico and Sun Country Airlines) that have added Belize to their destination choices. After promising an even greater growth in the tourism and travel industries, Heredia spoke of what is in store for BRS. He spoke of a brand new Police Barracks, a new pre-school, a high school, health center and an artisan market for Caye Caulker. As for Ambergris Caye, Heredia only spoke about the beach expansion at the Boca del Rio Area, which will be a park as well. He said that it would be a state-of-the-art recreational area for islanders and visitors alike to enjoy. At no point did the Area Representative mention the much-needed new schools or a medical center for San Pedro, as had been promised in the past. 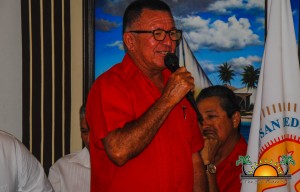 The idea of a hospital was a promise made in the ruling United Democratic Party manifesto before the general elections in 2015. Back then, it was revealed that a $20 million investment would be needed to erect the hospital, and Heredia stated that Central Government was one more step closer to completing a loan application to fund the project. However, after winning the general elections in 2015, the medical facility for Ambergris Caye has never made it on the UDP’s annual budget presentations. 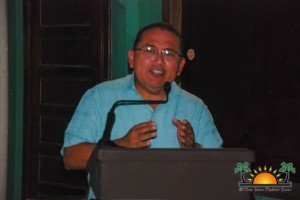 Heredia was questioned the same day the budget was approved, and the minister was quick to share with The San Pedro Sun that a multi-educational facility will be built north of San Pedro Town. He indicated that in May of this year, construction is expected to begin for a pre-school, primary and high school. When it comes to the medical facility for San Pedro, Heredia said that perhaps it would be included in the 2020-2021 national budget, and as for road infrastructure, this is a responsibility that mainly lies on the local government of each municipality across the country.
PUP standard bearer for BRS Andre Perez is not happy with what is being offered to the cayes and called out Heredia. He reiterated what his party said during the budget’s debate, pointing out that most of the spending for this new fiscal year will focus on building highways on the mainland, calling them ‘dead end projects’ which will take more tax monies from Belizeans. Perez said via a video posted on social media that more should have been allocated for the islands from 2019 to 2020. “A much –needed sewage system for Caye Caulker, expanding the sewage system for Ambergris Caye, and more important, no housing plan for Belize Rural South,” he said. “For the next twelve months, expect nothing to happen in our constituency other than just more empty promises and rhetoric from your UDP Area Representative.” Perez described Heredia as an uninspired Minister in Cabinet, who is unable to fight and justly claim what should be allocated for BRS.
The $1.25 billion 2019-2020 budget came into effect on Monday, April 1st.