The Government of Belize (GOB) continues its legal battle with the Opposition People’s United Party (PUP) regarding the holding of the national referendum on whether to settle the territorial dispute with Guatemala at the International Court of Justice (ICJ). The referendum was to take place on April 10, 2019 but was halted after Chief Justice Benjamin granted the PUP an interim injunction questioning its process. GOB made its first attempts to discharge it during the first hearing on April 15th, but after hearing arguments from both sides, Chief Justice Benjamin adjourned the case till Monday, April 29th, when a decision will be taken on whether the injunction will be discharged. 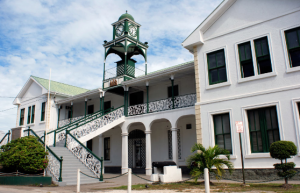 Senior Counsel Lisa Shoman continues to represent GOB, and after the case was adjourned she explained what the application to discharge the injunction is all about. Shoman said that the injunction was placed on specific writs and it enjoined the proposed referendum. “It was meant specifically to stop the holding of the April 10th referendum. Thus, we believe that the injunction should be discharged,” said Shoman. The Senior Counsel further stated that the injunction was given based on a technical defect in the writ of the referendum, which did not propose a settlement. However, those writs were date-specific and were meant for specific writs. “Those writs are no longer in existence, they are expired,” Shoman told the media. According to her, that will be their focus during the court hearing on April 29th. 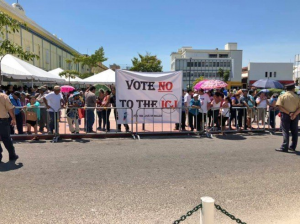 Following the aftermath of the injunction, GOB created a Territorial Dispute Referendum Bill, which was debated in the House of Representatives and the Senate. Both governmental entities passed the Bill into law and GOB set May 8, 2019, as the new referendum date. The PUP will still try to bring about another legal case before then, this time regarding the Special Agreement signed in 2008 between Belize and Guatemala to take the territorial dispute to the ICJ, which is part of this new referendum law.
Attorney-at-law and PUP Area Representative for Caribbean Shores, Kareem Musa shared with the media that the injunction order by the Chief Justice was based on two grounds for which they had applied. Musa said that one of them was in regards to the unconstitutionality of the Special Agreement, and the second referred to the defective writs. According to Musa, the PUP will file a new claim against Section Three of the new Territorial Dispute Referendum law, which refers to the Special Agreement. The Opposition continues to argue that this agreement must be taken before the House of Representatives for the required debate and earn the two-thirds majority vote for its approval. “The Special Agreement would give power to the ICJ judges to adjust the borders of Belize, which are defined in Schedule One of the Constitution of Belize,” said Musa.
While both parties prepare for the upcoming court case on the injunction, GOB continues to accuse the Opposition of being ‘obstructionist,’ and for politicizing the issue. The government believes that every Belizean should not be deprived of his/her right to vote on this matter of national interest.