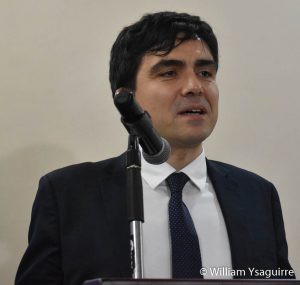 The Belize tourism industry stands to benefit greatly by having its electronic payments infrastructure secured by Belize’s first cybercrime law. The Council of Europe and the Forum of Presidents of Legislative Assemblies (FOPREL) of Central America and the Caribbean are helping to draft the law at a four-day workshop hosted by the Ministry of National Security at the Best Western Biltmore Plaza Hotel from Monday through Thursday, February 13th.
Global Action on Cybercrime Extended (GLACY) Project leader Matteo Lucchetti for the Council of Europe’s GLACY and FOPREL’s executive director Dr. Santiago Rivas LeClair joined Belize’s representative to FOPREL, Speaker of the House Hon. Laura Tucker-Longsworth and other Belizean legislators in tweaking Belize’s draft legislation on cybercrime to harmonize with the Budapest Convention.
The Ministry of National Security’s Chief Executive Officer Col. George Lovell (retired) explained that Belize got on board with the GLACY project for Central America and the Caribbean last summer, and last November, Belize invited the Council of Europe to help Belize revise the draft law against cybercrime to the international standard which 40 other countries have already adopted.
With most tourists making flight and hotel reservations, paying for tours, meals, and other services with their credit cards, it is vital for the tourism industry and Belize’s banking sector to secure all their customer’s digital information.
Recent cases of rogue South American visitors stealing data from Scotiabank’s Automatic Teller 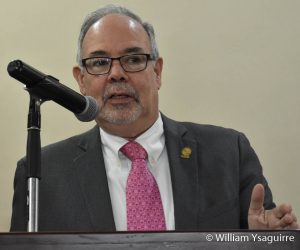 Machines (ATM) only serve to highlight this need. Recently Belize police arrested three suspects, two of which walked with one resulted in a conviction, for which the culprit paid a $6,000 fine and was released. The ongoing U.S. Federal Court case in Utah, USA, further serves to highlight the need to update Belize’s laws so that electronic evidence may be introduced and used to punish offenders. Director of Public Prosecutions Cheryl-Lynn Vidal was part of the legal draft team, and the Special Envoy for Women and Children Mrs. Kim Simplis-Barrow also took an interest as the recent spate of Internet bullying young girls and the online sexual exploitation of children in Belize is very much her concern. Other participants included bankers, law enforcement officials and information technology and communications professionals, internet service providers, and representatives of broadcasting companies and civil societies to ensure the new law has no loopholes. 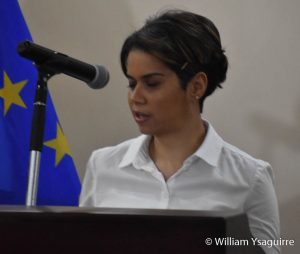 Lucchetti explained the very nature of cyber-crime means the stolen data or funds are usually stored on a computer server in another country or jurisdiction from where the crime is committed. It is important to have global cooperation in tracking down these cyber-criminals, who hide in the Dark Web, ready to ambush the unwary victims intent on online shopping, Internet gaming, and adult entertainment, who get sucked in by Internet scams.
Bitcoin and other virtual currencies make following the money trail difficult, often untraceable, and finding a cybercriminal’s internet server address would be impossible without international cooperation. Even when the criminal is caught, recovering the stolen funds is not guaranteed, Lucchetti allowed. The victim may get back half, maybe, but there’s hardly every 100% recovery of the stolen goods. It is important that the language of the law define cybercrime in the same way as the international standard, Lucchetti emphasized the same as Europe and the rest of the world. Or else they may not be able to cooperate in sharing evidence to convict the thief.
The GLACY Project is the largest single project that the Council of Europe has ever handled, and he has been involved since 2016. Donors have contributed €19 million (USD$20 Million) to the budget, and more funds have been offered to extend the project until 2024.