The inaugural visit of Dr. Gene Leon, President of the Caribbean Development Bank (CDB), and his delegation to Belize included discussions with the Prime Minister and Cabinet, the Central Bank of Belize, engagement with private sector entities including the Belize Chamber of Commerce and Industry and the Citrus Growers Association, and meetings with entities executing projects with CDB support. Team members met with several agencies to identify new areas for CDB partnership and support in the private sector space and called on CARICOM sister institution, the Caribbean Community Climate Change Center. 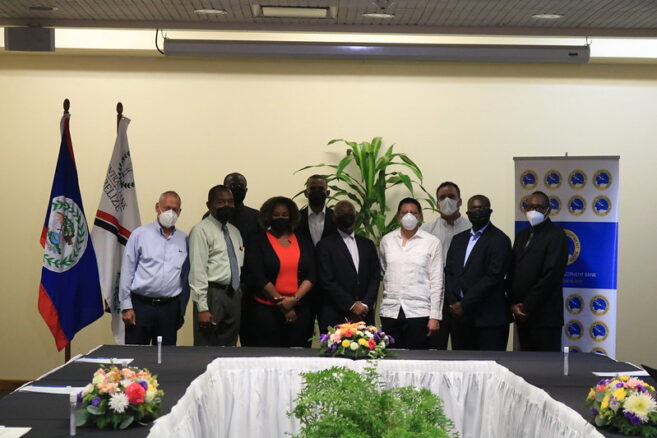 Notably, members of the delegation visited The Hub in Belize City, a community resource center constructed in the Lake Independence Area under the bank-funded Youth and Community Transformation Project; the Coastal Road Highway Upgrading Project; the Belmopan Polyclinic being constructed through the Social Investment Fund; and a display of equipment acquired under the first and second Road Safety projects. President Leon and Mr. Daniel Best, Director of Projects, also made appearances on the Business Perspective and SunUp on 7 shows, respectively, discussing ongoing work of the bank and plans for further engagement intended to benefit Belizeans. 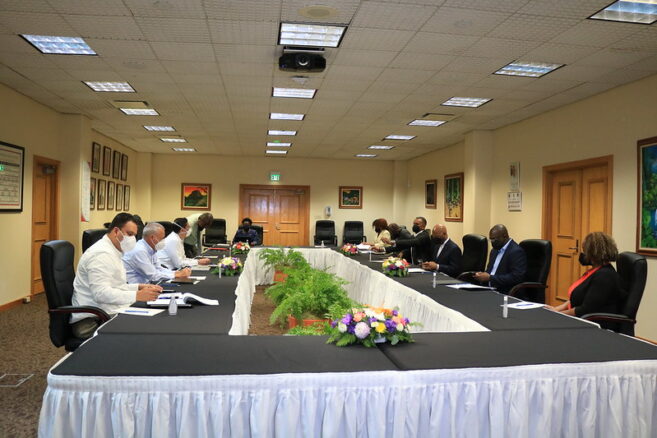 A highlight of the mission was the launch of four projects aimed at enhancing trade. Two projects are financed by CDB and two are financed through the European Union-funded Economic Partnership Agreement & CARICOM Single Market and Economy Standby Facility with co-funding from the bank. The projects focus on improving Belize’s trade competitiveness with a view to improve trade facilitation. The first project will enhance Belize’s capacity to facilitate trade and will involve a study on the time taken for goods to be processed through the Customs and Excise Department, and the feasibility of establishing an electronic single window for trade in Belize. The second project involves the enhancement of the national quality infrastructure by improving the processes undertaken by the Belize Bureau of Standards (BBS). The Belize Agricultural Health Authority will benefit from the third project which will develop a risk-based sanitary and phytosanitary import and export control system; and the final project, a grant to the Toledo Cacao Growers Association (TCGA) will assist the entity in the development of its capacity to participate in the cacao-chocolate global value chain. A tour of the BBS laboratories followed the launch. 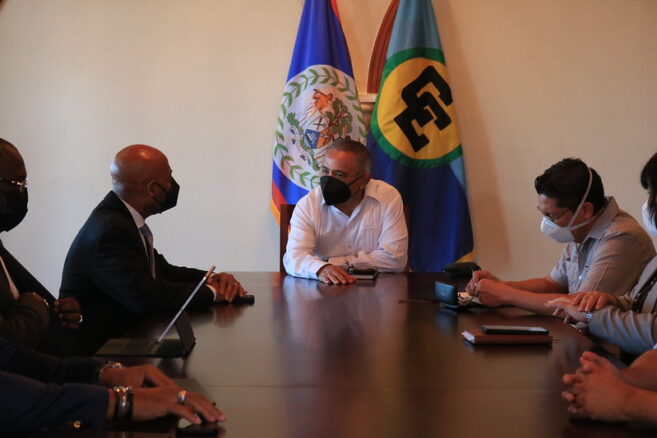 The mission extended to the Toledo District where the president and his team visited project beneficiaries, the Sarstoon Temash Institute for Indigenous Management (SATIIM) and TGCA. At SATIIM, presentations were delivered by women involved in the creation of the Xe’il clothing line, developed through a project financed by the CDB and targeting women’s economic empowerment. As guests of the TCGA, the delegation toured Mr. Justino Peck’s cacao farm in San Jose Village and the facilities at the Maya House of Cacao.
The president expressed satisfaction with the visit, highlighting the alignment that exists between the vision of the new administration and the vision of the CDB. He spoke to the transformative potential of the Coastal Highway Upgrading Project in mobilising trade and impacting lives and emphasized the importance of transferring valuable skills such as those employed in the creation of the Xe’il clothing line to children and youth from a sustainability perspective. 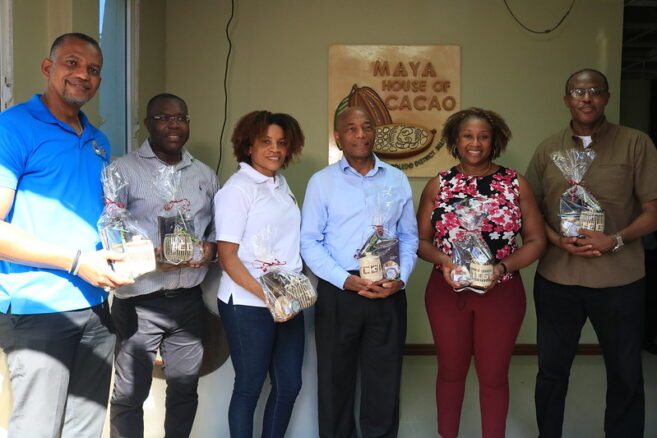 “We are buoyed and encouraged as the Bank’s strategic partnerships were strengthened and potential new projects identified on a successful and rewarding mission to a founding member of the Caribbean Development Bank,” said Dr. Leon.
The Government of Belize continues to view the CDB as an able and valuable partner in the pursuit of economic recovery and further national development to the benefit of all Belizeans.
See photos of the inaugural visit: https://flic.kr/s/aHBqjzBJWT