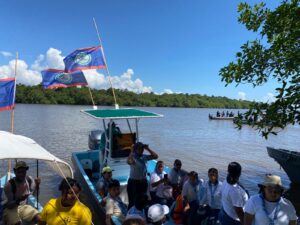 The Guatemalan armed forces took down Belizean flags planted on the Sarstoon Island by Belize Territorial Volunteers (BTV) members claiming they were on their territory. According to maps, this island is within Belizean territory; however, Guatemala claims it is on its side. BTV leader Wil Maheia denounced the Guatemalan soldiers for confiscating the Belizean flags. Even though Belizean security personnel asked them to turn them over, they refused and kept the flags. While it was unknown what they would do with the flags, on Independence Day, Prime Minister Honourable Dr. John Briceño informed the nation that the flags were returned to the Belize Embassy in Guatemala City, Guatemala.
The incident outraged many Belizeans, and the Government of Belize issued a statement on Sunday, September 18th, the same day as the incident. The official note came from the Ministry of National Defence and Border Security, saying that Belizean forces informed Guatemalans that they were on Belizean waters and should leave. The report ends by saying that all parties left as the sea conditions started to get choppy. The Belizean flags were not returned to the BTV.
According to BTV leader Wil Maheia, who led the expedition to Sarstoon, the trip was to show pride and patriotism. They headed out in five boats taking Belizean flags and including children scouts. According to reports, when they arrived at the mouth of the Sarstoon river, there were about five boats with Guatemalan soldiers trying to impede their access to the river and the island. Maheia continued, and they managed to plant two Belizean flags on Sarstoon Island. The proud Belizeans then sang the national anthem and left when they observed the Guatemalan soldiers removing the Belizean flags from what is considered Belize territory. 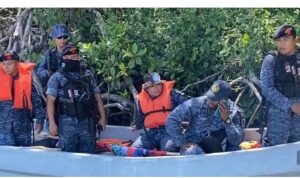 Maheia said that a patrol consisting of the Belize Coast Guard and the Belize Defence Force made their presence. 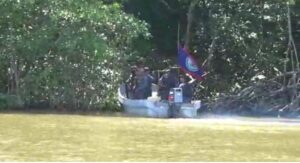 The BTV leader approached them and informed the joint patrol that members of the Guatemalan armed forces had removed two Belizean flags from the Sarstoon island. There was an exchange between Maheia and a member of the Guatemalan troops who kept telling them to leave. The Guatemalan commander told Maheia he would not return the Belizean flags because they were erected on Guatemalan soil. In other words, they made it clear that the entire area of that part of the river belongs to Guatemala.
The BTV said on Tuesday, September 20th, that the situation is dire, and the government should do something immediately. They demand the government put a military presence around that area to deter Guatemalan incursions. The Sarstoon Forward Operating Base is not operating now, and soldiers were relocated to the village of Barranco. The government hopes to start repairs on the base and have the BDF presence back in the area.
In the meantime, the Ministry of National Defence and Border Security said that the joint deployment continues to conduct regular patrols from Barranco to Sarstoon Island.