Belize’s largest and most used public medical center, the Karl Heusner Memorial Hospital (KHMH) has been operating at 50% capacity since Monday, March 19th due to the dire infrastructural conditions at the installation. It was reported on Friday, March 16th that debris started falling off the hospital’s ceilings in certain sections of the building, forcing management to cancel all clinics and switching to an emergency management mode. As assessments are being done to start the necessary repairs, the situation at the hospital is worse than expected and according to engineers, it will take a long period of time to complete the urgent renovations. However, even under these conditions, the Public Relations (PR) Office at KHMH has indicated that the hospital will still accept emergencies patients, including those from Ambergris Caye.

The hospital’s Board of Directors called an emergency meeting that same Friday to seek a solution to the urgent matter. Hospital management has met with private sector facilities where patients can be transferred and treated while construction work starts at the hospital. Even though clinics were canceled and the performance of the institution reduced significantly, a PR representative told The San Pedro Sun that KHMH will not close their doors to patients who require emergency services. KHMH did advise that for minor cases residents should refer to their local clinic.
The damages to the ceiling, believed to have been compounded by the January earthquake off the coasts of Honduras, has been affecting the day to day activities at the KHMH to the point that several key areas cannot function properly. The KHMH issued a press release on Monday, March 19th indicating that the areas affected include the Operating Theatre, Central Sterilization Unit, Imaging Department, Specialists Clinics, Pharmacy and Dietary Service. The released also stressed on the cancellation of elective services and that visiting hour were also reduced. 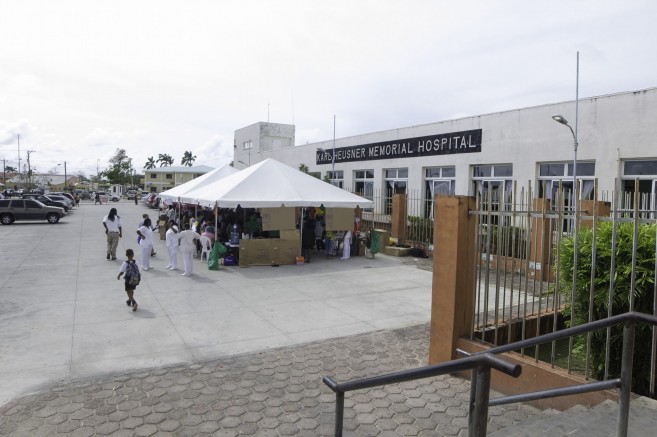 On Tuesday, March 20th officials from the Ministry of Health (MOH) met with the management at KHMH to try to find a stable solution and ensure that elective surgeries and clinical services resume as soon as possible. According to the Director of Health Services at KHMH, Dr. Marvin Manzanero if those services take long to resume they have other options. “In terms of elective surgeries, another option for patients is to go to Western Regional Hospital or the Northern Regional Hospital, we have operating theatres,” said Manzanero. “If we feel that there’s not going to be an option to use those in Belize City we can use the ones at these other hospitals.” In the meeting, the reinforcement of the affected beams was also discussed and an in-depth assessment of the entire structure was recommended. Assisting the Belizean team comprised of the Government of Belize, Pan American Health Organization (PAHO), and engineers from National Engineering and Maintenance Centre (NEMC), with the task of conducting damage assessment is a Mexican team of engineers who are expected to arrive in the country in coming days.
On the heels of this medical crisis, the People’s United Party (PUP) wonders why the hospital was left to deteriorate for years since it is known that the matter had been raised some time. PUP Leader Honourable John Briceño stated that KHMH would have been the proper place to have invested some of the funds from the Venezuelan Petrocaribe funds. “Instead Belizeans will have to access more costly private entities for specialized care,” said Briceño. ” The number one health institution in this country, probably the only hospital that provides what they call tertiary services, has been neglected. The Government fully knew the problem and they refused to address it earlier.”
The KHMH was built more than 20 years ago in 1995 and has been used every day since then. Every year, the hospital treats an average of 15,000 patients along with an average of 30,000 encounters in the Accident and Emergency Unit. The KHMH is also known for performing an average of 300 surgeries a month. KHMH was formally incorporated as a statutory authority by way of the KHMH Act of 2000, which designated it as the country’s national referral hospital.

(Not) Working my butt off