Aidan Williams and Amber Rivero are the new representatives for ACES


Six students of Ambergris Caye Elementary School (ACES) graced the stage of the San Pedro Lions Den on Wednesday, March 25th during the sixth annual Mr. and Ms. ACES Pageant. Four lovely ladies and two handsome young men took part in the pageant held to raise funds for the upcoming school semester. Vying for the title of Mr. ACES was Aidan Williams and Peter Ramirez, while Amber Rivero, Angelica Aranda, Naggii Valladarez and Jan Coy competed for the title of Ms. ACES. In the end, it was Aidan Williams and Amber Rivero who took the crowns. 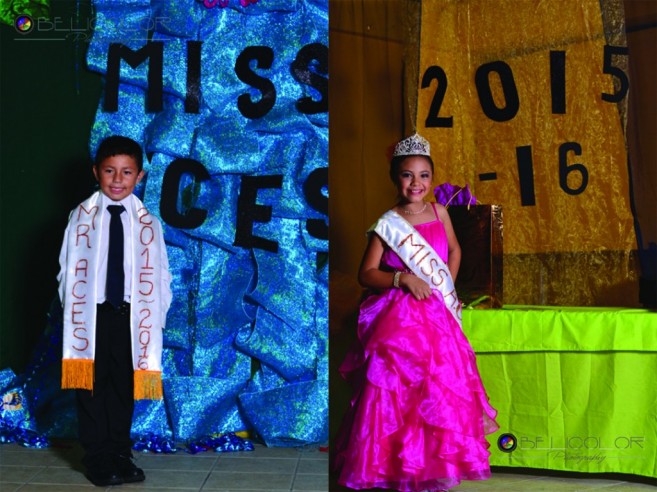 The students performed for a crowd of spectators who cheered them on every step of the way. The theme of the pageant was Nature and the participants dressed in elaborate costumes representing the rich and vibrant flora and fauna of Belize. The boys and girls also participated in a talent segment showcasing amazing performance skills. In the elegant formal wear segment, the girls graced the stage in gorgeous gown and it was all sharp tuxedoes for the boys.


Previous to the pageant, each participant had been raising funds that would be considered at the time of choosing a winner. Aidan Williams raised $306.05, Amber Rivero raised $1,079, Angelica Aranda raised $579.75, Naggii Valladarez raised $594, Peter Ramirez raised $491 and Jany Coy raiser $230. Funds were also raised during the pageant. In the end Aidan Williams was crowned Mr. ACES and Amber River was crowned Ms. ACES.
ACES would like to congratulate all the contestants for a spectacular show. Amber Rivero and Adain Williams will now represent ACES in their own special ways for the next school year. Big thanks to everyone who came out and supported the pageant.