Michelle Nuñez made her triumphant return to Ambergris Caye after excelling at the Miss America Latina del Mundo pageant, held at the Barcelo Occidental Grand Xcaret Resort in the Mexican Riviera Maya. Nuñez made her mark in international pageantry, capturing the award for Most Original Cultural Costume and the fourth runner up position to the 2016 Miss America Latina del Mundo, a title that was won by Miss Peru.

Upon her return to the island on Monday, October 3rd, supporters and fans gathered at the Tropic Air terminal to give her a San Pedro style homecoming. An emotional Nuñez thanked everyone who welcomed her and proudly shared with them her prize. “I am very happy for having represented Belize at such a prestigious level,” said Nuñez. “It was a great experience, but also a tough pageant. I am glad I did well. Even though I knew I was competing against top contestants, I was always optimistic about my goal.” An entourage of gaily decorated golf carts then escorted Nuñez in a parade through San Pedro Town.

Nuñez participated in the pageant on Friday, September 30th. With her preparation and dedication, she held a strong presence on stage from the first segment: the cultural costume presentation. Her impeccable performance impressed the judges, and after the swim suit segment, she managed to hold a spot in the top 10 finalists from among the 50 participants from across the globe.

As the pageant progressed, Nuñez continued gaining confidence as the many Belizeans who attended the event loudly cheered her on. During the evening gown competition, the top five finalists were announced, including Nuñez to much of everyone’s delight. Taking the title and crown was Miss Peru Laura, Spoya. 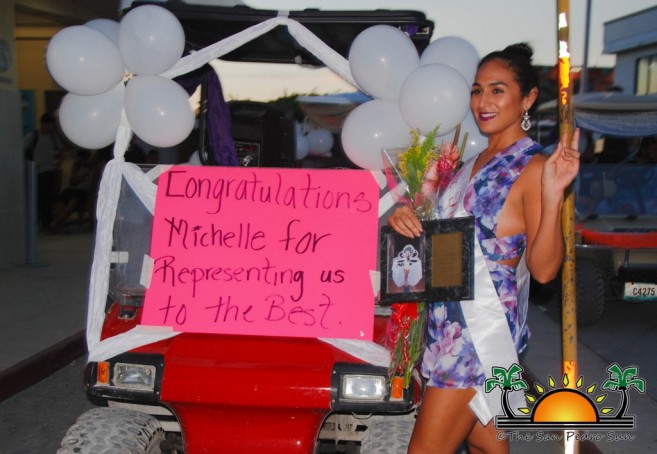 Nuñez is known for her community-minded endeavors. In January 2015, during her tenure as Miss San Pedro 2014-2015, Nuñez launched SHINE Girls Club, a youth enrichment program designed for young girls to succeed in life. She is the present director of the club. That same year, she earned a Leadership Award as the Top Agent for Insurance Corporation of Belize (ICB) San Pedro Branch. She is also the Secretary for the Rotaract Club of San Pedro.

Congratulations once again for representing Belize so well!

Delegates of the Costa Maya Pageant busy on the island