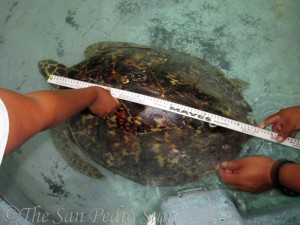 A 65.2lbs Hawksbill Sea Turtle is currently is the care of Marine Biologist, Kirah Forman at the San Pedro Hol Chan Office. On Wednesday, January 25th a little boy down in Hopkins caught the trapped Hawksbill Turtle (the most endangered sea turtle in the Caribbean and on the IUCN Red List (International Union for the Conservation of Nature and Natural Resources) that was very weak and wasn’t doing very well.
According to Forman, the young man brought the turtle to safety and contacted the fisheries officer in Hopkins, who later contacted the San Pedro Hol Chan office. Hol Chan made arrangements to have the turtle brought to its facility where it is currently receiving treatment.
Forman stated, “The Hawksbill turtles are endangered throughout the world and are on the IUCN’s red list – a list of all endangered species; and has been protected for several years here in Belize along with the other sea turtles. Over the past years, conservation groups have been working on getting the number of these turtles up so – if we are able to help one survive, and it’s also a female, it is very important.” 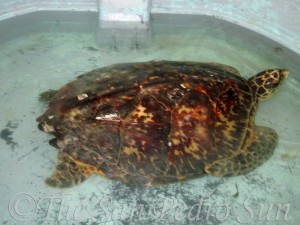 Apart from being very weak, the turtle had many barnacles on its shell and showed signs of a compromised immune system. At the Hol Chan office, the turtle measuring 68 centimeters in length, is receiving treatment such as antibiotics and vitamins in an attempt to nurture it back to good health. The turtle will be kept here on the island for a few weeks, and once it has completely recuperated, will be tagged and released.
The San Pedro SAGA society is assisting the Hol Chan office in providing medications as well as veterinary services to the sick turtle. The general public is advised that sightings of any stranded sea turtle should be reported immediately to the fisheries department or the Hol Chan Office at telephone number 226-2247.